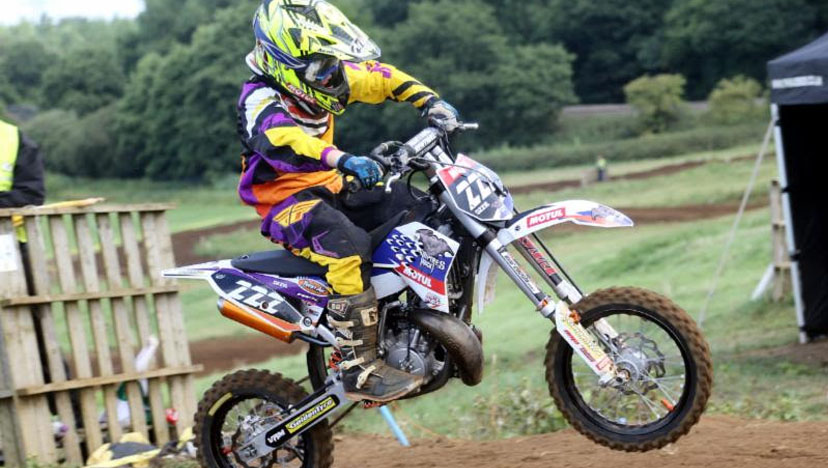 It was a great weekend for the Vampires Rock Motul Racing Team at the second round of the GT Cup at Wilden Lane. The weather was perfect and the track in a great condition for the Championship event. Once again the gates were full and it produced some good racing on a very demanding track.

The 65 class was out first with youngsters Jack Grayshon and Ozzie Murray. Jack arrived at the second round lying second in the Championship standings. He was set back early this week when a training accident left him with a chipped bone in his foot so he knew the weekend at Wilden Lane would be challenging. Only fresh out of plaster on Friday he was strapped up and ready to go, he did not get the start he hoped for and pushed hard until the end securing a fourth place overall during the weekend. He is now in 3rd place overall in the Championship standings but still a long way to go in the season.

Ozzie also produced some good strong results after a bad opening round of the Championships where he was hindered by mechanical problems all weekend. Ozzie was keen to make amends and improve his results from round one. He put in some strong and consistent lap times and managed to claw back eight places putting him in 23rd position in the Championship from 31st. He is within reaching distance of the top twenty now and has twenty five races of the Championship left.

Jordan Hearn was racing in the Big Wheel 85 class and once again he had a great weekend. He rode strong and hard all weekend and gained some very creditable finishes in the top ten. Jordan is now lying in 13th place in the Championship standings with very few points between himself and fifth place.

Team Manager/Owner Steve Steinman –  “I couldn’t ask the boys for any more than they gave at Wilden Lane, the track was rough and very demanding with some natural steep hills and drop offs. I’m happy where we are at the moment in the standings and know we can improve every round. Ozzie has another year after this one on the 65s so there is no pressure it’s just a learning year for him, Jack looks set to move to the small wheels in 2015 but he also has an option to stay down if he chooses too. Jordan will also contend the BW85s next year again, so I’m very pleased with all them and how they are working and developing.”

The next Championships will be the first round of the British Youth Nationals at Fat Cat Moto Parc on 12th and 13th April, and the GT Cup will be on the 19th and 20th April at Warmington circuit.