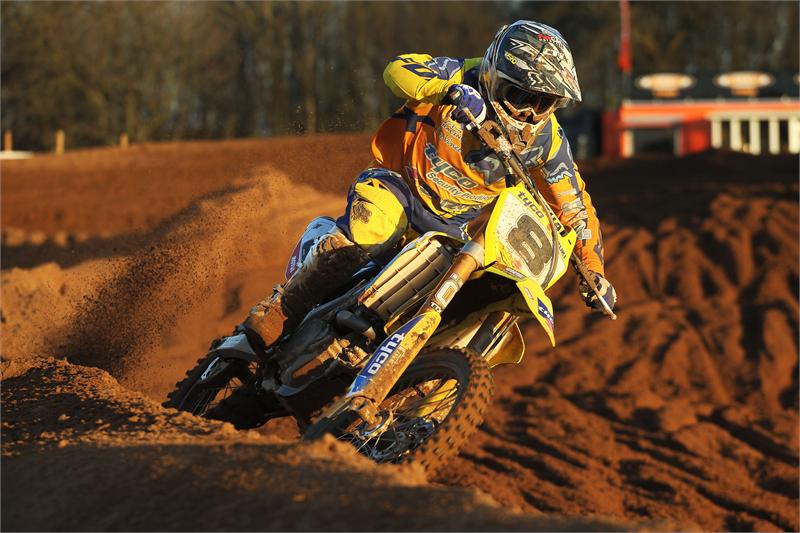 TAS Suzuki’s Tyco-backed Motocross team riders Stephen Sword and Stuart Edmonds raced to solid top-10 points-scoring rides at the opening round of the Maxxis British Motocross Championship at Fat Cat Moto Parc near Doncaster on Sunday.
In the MX1 class, Sword put his RM-Z450 on pole position for the three races of the day, before going on to holeshot the opening moto. Despite blistering starts in every race of the day, and battles at the sharp end of each race, Sword settled for a pair of sixth place finishes and an eighth after tiring towards the end of each moto.

“Well, we’ve certainly got my set-up issues sorted. The bike was a dream to ride today and I even chose the standard engine over our race-prepared option. However, because I’ve concentrated so much over the winter on finding that set-up, I’ve lost out on bike time and so towards the end of each race I was tiring a little. I could have pushed, but I’d rather bring home solid points without injury than not. It’s a solid start with decent points in the bag, so I really can’t complain.”

MX2 rider Stuart Edmonds had reversed fortunes compared to his team mate, after suffering poor starts. But the RM-Z250 rider’s determination shone through, charging hard in each race to come back through the pack to take a seventh place finish and a pair of 10ths, the most notable being the final race of the day, where a competitor landed on the back of his bike forcing Edmonds to complete the entire race without a back brake.

“That was a tough start to the season if I’m honest. My starts were the biggest issue today and I just couldn’t get out of the gate. But I knew we had the speed so just got my head down in each race and pushed. The last race was interesting after I lost the back of my bike thanks to another rider and had to push without a rear brake, but I feel at home on the RM-Z250 so it wasn’t a huge drama. Naturally the focus for me before the next round is my starts.”

“We didn’t quite meet our points objective this weekend, but we left with a bag full and without injury, which is not a bad way to start the year. Stephen was quick out of the gate with a blistering qualifying performance and great race starts but faded towards the end of each race. We’ve concentrated so much on perfecting the bike set-up that Stephen’s not really had the time on the bike, but we can rectify this and the positive to take is that he has raw race speed.

“Stuart on the other hand has the pace and race fitness but is struggling with his starts. We knew this could be an issue, but it really hampered his performance today and didn’t show his true potential. Once he gets his head down he’s impressive and the pace comes, so if we can nail the starts then I think he’ll be at the sharp end from the off, giving himself less work to do on the process. On the whole not a bad way to start the season.”