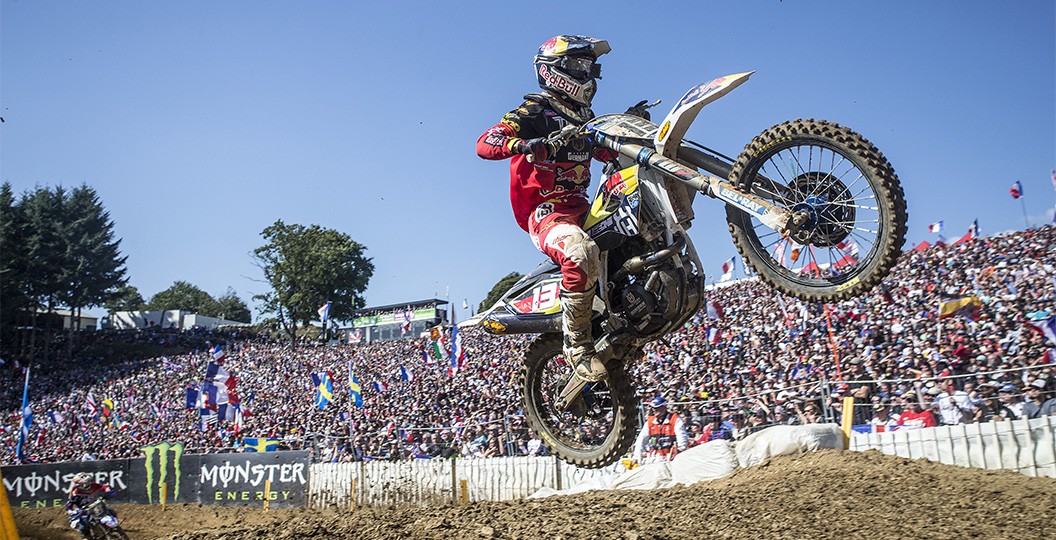 Signing off on their 2015 racing season by representing their respective national teams, Husqvarna Motorcycles’ factory backed MXGP and MX2 racers Max Nagl, Todd Waters, Dean Ferris and Harri Kullas officially brought their 2015 seasons to an end at the FIM Motocross of Nations at Ernee, France.

The biggest motocross race of the year once again proved to be an incredible sporting occasion with a capacity crowd filling the French hillside circuit.

For Red Bull IceOne Husqvarna Factory Racing’s Max Nagl the final major event of 2015 saw a return to the type of form that saw the German lead the MXGP World Championship during the first half of the season. Finishing a strong third in the opening MXGP/MX2 race, Nagl showed impressive race-long pace and consistency despite tagging the back of Gauthier Paulin’s cartwheeling bike and crashing mid-way through the moto. Frustratingly a crash on the opening lap of his second race saw Nagl re-start almost last. With no chance of working his way towards the front, Max opted to retire from the moto not wanting to risk injury.

Australian duo Todd Waters – Red Bull IceOne Husqvarna Factory Racing – and Dean Ferris – Wilvo Nestaan Husqvarna Factory Racing – both had a tough day at Ernee. With each rider seeing misfortune deny them of better moto finishes, it was Waters who ultimately came away with the stronger results. Finishing 13th and 12th, bad starts prevented Todd from finishing higher. Despite running as high as third in the day’s final MXGP/MX Open race, Dean Ferris rounded out the 2015 Motocross of Nations with 19th and 20th place moto finishes.

Max Nagl: “I really wanted to end the year well, and in part I feel like I did that. Since my injury, together with the team I’ve worked really hard to get my race fitness and speed back. And during my qualifying race on Saturday and my first race today I feel like I showed good, race-long pace. I got an ok start in the opening MX2 and MXGP race. I made some good passes and was strong all moto. Although I hit Gautier Paulin’s bike when he crashed in front of me, I felt I was riding well and finished third. I crashed on the first lap of my second race. I was almost last and being so far back, it was kind of unsafe for me being in among slower riders on a very rough track. I just didn’t feel happy and didn’t want to risk anything so I opted to stop. Not the way I wanted to end the event, but now I can focus on 2016.”

Todd Waters: “The Motocross of Nations is such an amazing event, but from a team point of view things can change fast. That’s what happened to the Australian team in the last moto. But it’s always an awesome atmosphere, and this year was really something special. For me it was tough. If you get a good start and run near the front it’s amazing, but I didn’t get great starts and wasn’t in the action. When a rider falls right in front of you and you get taken down, like happened to me in the first moto, things are over before they’ve begun. It’s unfortunate, but as we all know it can happen in racing.”

Harri Kullas: “The Nations is always a great event and for me it was a really good one this year. I got my best personal results with fifth and sixth MX2 class results. It was also great for the Estonian team getting fourth. The atmosphere and track were great – the track got seriously rough, but it was well-prepared and fun to ride. My second moto was the best for me, finishing 12th. I got a good start but messed up a little on the first lap. My speed was good and I came from about 26th to 12th, so I was pleased with that. 15th in the first moto was pretty decent, so I feel like I had two good results.”