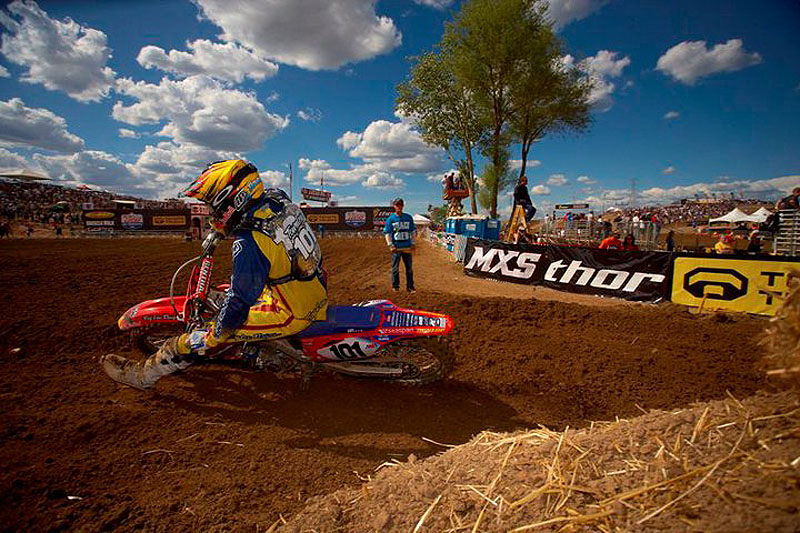 Townley talks about his ‘catch 22’

Rewind 12 months and Ben Townley was still dealing with the effects of a serious concussion that ultimately was to shadow the former world champs return to Grand Prix Motocross racing.   After competing in the first 4 GP’s of 2011 and realising that he was not ready to do battle on the world’s toughest stage at the level he knew he was capable of, Townley pulled the plug and returned to NZ to rethink his career and future.  Fast forward to present day and not only has Townley just wrapped up the NZ MX title by dominating the series, he has also regained that fire and speed that many fans across the world have longed to see from the former MX2 World champ and Supercross Lite champion.

A proud husband and father of two, with little Townley number 2, only a few weeks old, Ben was supposed to start the Australian Outdoor season in less than two weeks, but a surprise call from Chad Reed with a golden opportunity to race the AMA Motocross championship, sees Family Townley with another exciting challenge ahead.

Explain the thoughts that went through your head when you got the offer to race for Two Two Motorsports:

Well it was pretty tough to be honest, on one side I had an amazing opportunity with what Chad has presented, but on the other hand my Australian team and I have spent a lot of time getting ready for the championship that we we’re going after here down under that is just about to start. And to add to it all my wife had just given birth to our second son, it was a pretty hectic time altogether!

When will you leave for the USA and where will you base yourself?

We are still working on the plans for the shift over there, fortunately we have time on our side, so there’s norush. I’ll be based in Florida, which is nice for my family as we have lived there in the past. Chad has a really good practice facility and I’ll be able to take advantage of that which will be good for me.

Will you race again before making the move?

Right now I’ll race the first Australian MX National round, there is the possibility of some more before the season starts but we’ll make decisions about that closer to the time. For me it is important to keep some real race simulation going and being behind start gates is the best way to do it.

Will you be running all Chad’s sponsors or do you have a little leeway with your personal sponsors?

I’ll be riding as a complete TwoTwo Motorsports rider, as if Chad was out there but with the 101 on my bike though! All of my personal sponsors have been great about this opportunity and am very Thankful to them for their blessing to go ahead with it.

You mentioned that you are enjoying your riding so much probably more than ever before and have the Honda set up to your liking.  What have you changed or not to get to that point?

The past 4 months or so have been a combination of things making me so comfortable again on a bike. The CarltonDry Honda team and I have kept to the motto of keeping it simple, and it has worked perfectly for me as I’ve been able to build race craft along with my bike over that time. My bike has controllable power and the chassis set up is working so well with it, the bike as a package is right where I want it.

Going back to 2007 and that epic championship battle with Ryan Villopoto.  Do you think that you are capable of repeating that for 2012 and come 19th of May at the first round of the AMA nationals in Hangtown, what can fans expect to see from Ben Townley?

I definitely believe I’m capable of racing like that again, but I’m realistic that it’s been a while since I’ve raced at the highest level. In saying that, physically and mentally I’m in great shape and my bike form race craft is also really good. I want to run up front, but mostly I want to usethis opportunity to work with some great people on a very good bike to havea good complete season and get myself back to where I want to be.

Picture – BT at the Hangtown classic 2010. Will his American dream run smoother this time? Remember this is guy that pushed current AMA Motocross and Supercross champion Ryan Villopoto all the way in the Lites when they were Monster Energy/ Pro Circuit teammates.