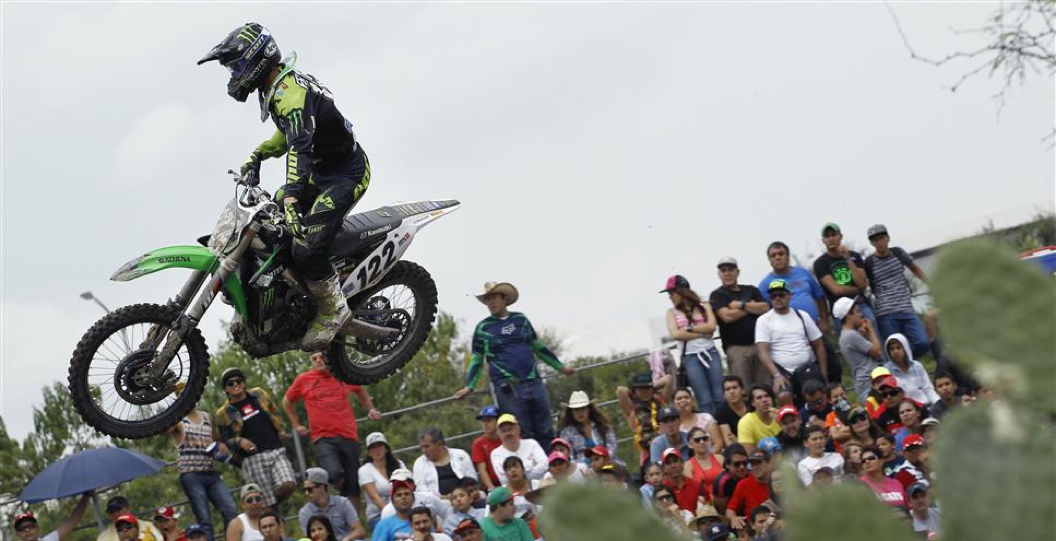 Dylan Ferrandis of Team CLS Kawasaki Monster Energy narrowly missed earning a series medal in the FIM World MX2 Motocross Championship despite a top three-moto finish in the final round in Mexico.

The Frenchman showed good speed all weekend, but his chance of victory in the opening moto were spoilt as he spent half the race stuck behind a fast-starting rival on a track in a city park at Leon where it proved difficult to make passes stick. His hopes of an overall podium were wrecked early in race two as a crash left him with a painful ankle injury, which forced him to withdraw from the event. Nevertheless he has finished fourth in the series and will represent France in the annual world team contest, the Motocross of Nations, at the end of the month.

Swiss teammate Arnaud Tonus finished the GP fifth overall from two solid motos, but once again paid the penalty for his failure to find good speed in the early laps of each moto. Despite missing five GPs due to injury he has finished the series in fifth place and, after representing his country at the Motocross of Nations, will jet out to the USA where he will continue his career, naturally on Kawasaki.

Young American Thomas Covington again proved fast, setting the fourth best time in the first practice, but he still has to control his youthful spirit as an early crash during the opening moto restricted him to fifteenth position. Pushed out at the start of race two, he battled from an initial fourteenth to finish twelfth.

Tommy Searle, the CLS rider in MXGP, once again put in a solid performance but never felt totally at home after recent injuries on a track with extremely large jumps. Nevertheless he showed his professionalism as he persevered for sixth overall after 9-6 moto finishes. The 27-point haul was not quite enough to lift him into the top ten of the world ranking, but twelfth was a creditable performance after missing six GPs during the campaign.

Dylan Ferrandis: “ We had to deal this weekend with the altitude this weekend, and to get use to having less power in our engines. I had a good qualifying race on Saturday, and a decent start in the first race but it took me too much time to find my rhythm and pass Lieber for the third position. When I came to third, the two leaders were far away. My second start was not as good, and on a jump I went wide when fighting for the fifth position; I landed on my back and felt some pain in my ankle so I had to retire for the race. I will got for an examination when I get home; I hope nothing is broken.”

Arnaud Tonus: “ This GP was not so easy. I always have some difficulties to find a good rhythm in the first few laps and when I do get settled in the other riders are already gone. My lap times are always better in the second part of the race. I scored a fourth and a sixth position today which is not so bad. After my injury I’m still not back to my best level; I need to practice more and I hope to be fit for the MX of Nations, my last race in Europe before moving to the US for a new challenge.”

Tommy Searle: “It was another difficult weekend for me, I didn’t have a good feeling all weekend and this morning I woke up sick. I just did my best as usual today; actually I got two good starts, but in the first corner I was already a long way back and had to push hard  to finish sixth overall.”