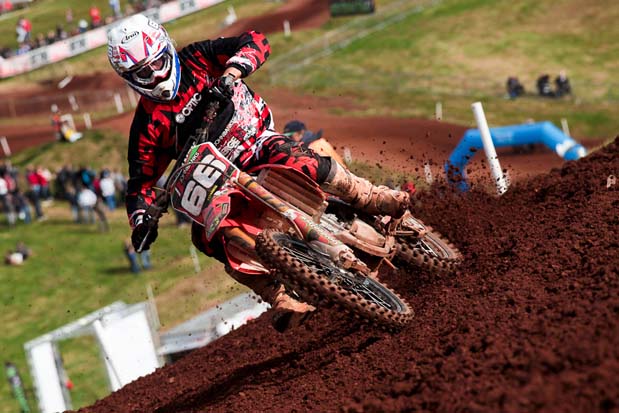 Finally, with autumn storms approaching, the final round of the Maxxis British Motocross Championship was held at Little Silver near Exeter in Devon last weekend. For John Banks Honda-supported rider Lewis Tombs this was crunch time, the time where his final championship position would be determined.

Qualifying on Sunday morning got off to a shocker of a start in which he qualified fourth-fastest, surprising not just himself, but much of his class as well. Super-pole however relegated him to tenth, nonetheless a good enough position to secure a good gate pick.Buoyed by his qualifying session, Tombs went to the start with the intention to make the best of the clearly prime conditions. Through the start like a shot, he soon was in third. A cat-and-mouse game with not only championship contenders Elliott Banks-Browne and Mel Pocock, but also close friend and rival James Cottrell ensued, lasting throughout the race and earning him another stunning fourth place.

The second race did not go as smoothly as the first. A mid-pack start after a crash meant a hard slog up the pack, but Tombs proved that this was not a problem as he returned to thirteenth by mid-race, making things very difficult for Luke Remmer and succeeding in moving into twelfth with the one-lap board out.

The seventh overall put Tombs in the middle of the super-final, in which the MX1 and MX2 classes race together. The addition of the more powerful 450cc bikes made it very challenging for Tombs indeed. Out of the gate just outside the top ten, he soon found himself progressively relegated to twentieth and then out of the points altogether, not helped by a small mechanical issue and a mistake that cost him three places. Nonetheless, he ended the race as the thirteenth MX2 rider, ending the day in eighth and the championship in ninth.

Commented Tombs: “In qualifying I was fourth but in super-pole I just didn’t put a lap together and dropped down to tenth, which was a bit disappointing, but I still had a good gate pick. In the first race I had a blinding start, was about fifth, and passed James on the first lap. I got to fourth and just rode my own race really, there was a lot of pressure from behind but I felt really good on the track. Graeme passed me but Mel blew up so I ended the race in fourth. I was really pleased with that.

“In the second race I wanted to do the same thing, but had a terrible start and crashed in the second corner. I just chipped away, passed a few people, and then half-way I got caught up behind Remmer really bad, but ended up twelfth which was ok. Then the super-final race again, had a good start, was twelfth, and then the throttle tube started sticking. I played it steady, tried to race for points, but eventually dropped out altogether. I think I ended up twenty-sixth. It’s a shame to end the year on a downer but I’m really pleased with that fourth in the first race.”