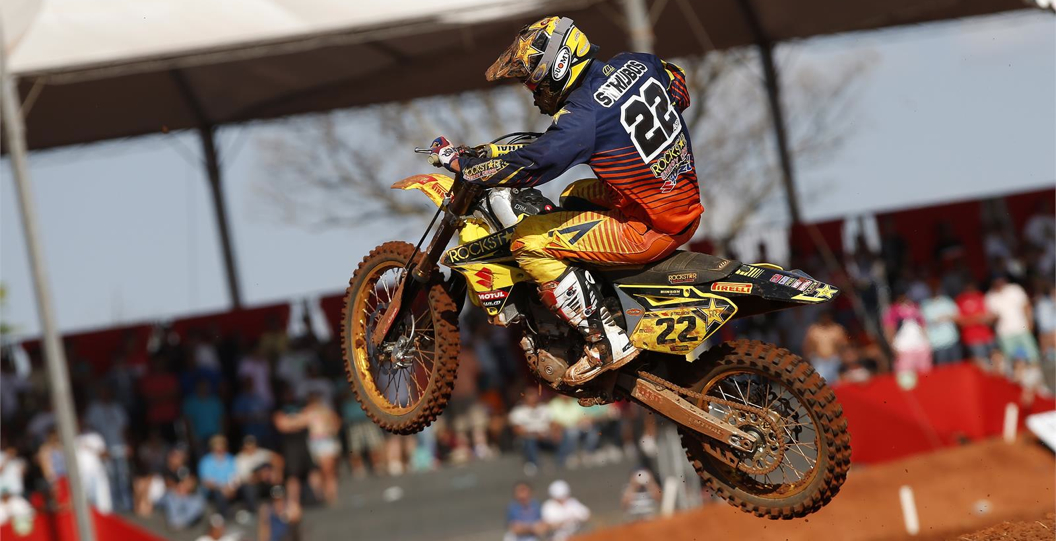 There were typical scenes in Brazil for the Grand Prix of Goias at Trindade and the penultimate round of the FIM Motocross World Championship as hot sunshine coated the dark red mud for practice and qualification just outside the city of Goiana as Rockstar Energy Suzuki World MXGP’s Kevin Strijbos rode the works RM-Z450 to fourth position for the same gate-pick for tomorrow’s motos.

A breezy Saturday morning meant that the racing programme was actually delayed due to a felled grandstand roof that had to be cleared from trackside. Fiery sunshine created tough conditions during practice and the Qualification Heat but Strijbos was quickly in the groove as one of the fastest in the reduced entry for the MXGP class. Trindade represents the second visit by the FIM series to Brazil this year and the brand new circuit was slick in places due to watering but provided a fresh challenge to the variety and diversity of the jumps.

In the Qualification Heat Strijbos was fighting for fourth position until a problem with the heel on his right boot proved to be a distraction. The Belgian circulated behind Shaun Simpson and with the crash by Jeremy Van Horebeek was still able to classify fourth.

Even warmer conditions than the near-30 degree temperatures today are expected for Sunday.

Kevin Strijbos: “Not too bad today. In the race I had to back-off at one point to line-up a pass and then I felt that something was wrong on my right side. I wondered if I had a problem with the brake but it was actually my boot. I then did what I could to pass Davide Guarneri and was looking everywhere. Riding was good and some lines also. Shaun overtook me but it was awkward to ride. Anyway, fourth was not too bad for the gate. My start wasn’t great today and I’ll speak with Roy [Matheson, FI Technician] if we can perhaps look at something for that. You have to be focused out there because every jump is a little bit different in length. It will be hard but I think my speed is there.”