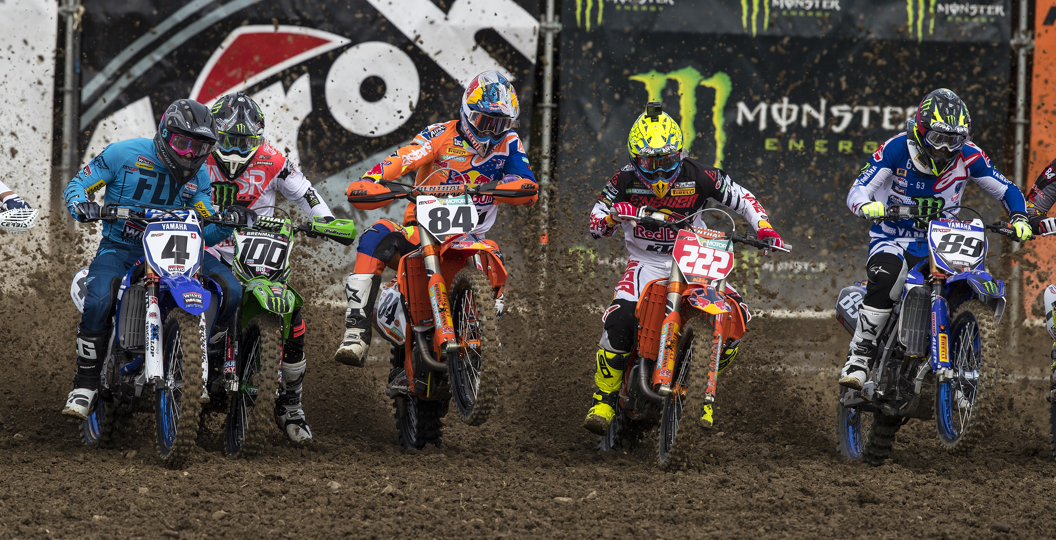 – Why were the scores so low over the weekend? The track was tough to pass on. It was possible to move forward, of course, but the elite guys were running very similar times and hitting the same lines for the most part. Jeffrey Herlings was running the same pace as Arnaud Tonus towards the end of the first MXGP encounter on Sunday, as the table below shows, but a mediocre start thwarted his efforts.

– Speaking of starts, those have really been a kryptonite for a lot of MXGP stars. Antonio Cairoli has claimed thirteen of the twenty-nine Fox holeshot awards and, amazingly, next on the list is Tim Gajser with four. Jeffrey Herlings does not have a single one though, so it is quite clear where the problem lies for ‘84’. Just how big is the issue though? Herlings has an average-starting position of seventh across twenty-nine motos.

– The first four rounds were simply terrible for Jeffrey Herlings, which was obviously well-documented, so it is fairly surprising that he almost has more moto wins than Antonio Cairoli now. ‘222’ has acquired nine moto wins across the first fifteen rounds and Herlings has eight. That is a remarkable comeback! How different would the standings look if the points were tallied up from round five on? The table below has that information.

– Romain Febvre has made significant progress in recent weeks, but has not stood on the podium at all this season. The last time that the former champion stood on the box was at the Swiss Grand Prix last year, funnily enough, which was three hundred and seventy-five days ago. That is quite a drought for a rider with such a lucrative contract. One could argue that ‘461’ was actually lucky to make the podium in Switzerland last year, as the same scorecard would have only been good enough for fourth this year.

– Although fourth overall was not quite what Romain Febvre wanted at Frauenfeld-Gachnang, there was a reason to celebrate. Febvre had his highest haul of points of the season, thanks to the fifth and third that he had in the motos, as Portugal was previously his best event. Thirty-four points were acquired on that day in July.

– There is an intriguing dynamic at Yamaha, as the Wilvo Yamaha MXGP outfit are responsible for most of the success that the Japanese manufacturer has experienced this season. The YZ450F has won two races in the premier class this year, thanks to Shaun Simpson and Arnaud Tonus, but the Monster Energy Yamaha Factory Racing riders have not managed to reach the chequered flag first at all.

– When was the last time that Yamaha won two motos or less across the first fifteen rounds of the FIM Motocross World Championship? Three years ago, when Jeremy Van Horebeek was the only rider beneath the factory awning and captured just a single moto win in the Czech Republic. Yamaha actually won just a single moto in 2012 and 2013, as well as 2014, so the fifteen triumphs that they had in 2015 made for quite the turnaround.

– Arnaud Tonus enjoyed a consistent streak prior to the second moto at the Grand Prix of Switzerland; he finished inside of the top ten in thirteen motos in succession. The Swiss pilot had, unbelievably, never managed that before! The highest streak that he managed to put together in MX2 consisted of ten finishes of tenth or higher and in America he put seven of those results together.

– It is fairly unorthodox for a rider to win one moto in the premier division, but fail to finish the next. When did this last happen? One thousand two hundred days ago. Gautier Paulin claimed the first moto victory at Valkenswaard in 2014, but then sustained multiple injuries when he was struck by another rider in the second encounter. That is remarkably similar to what Tonus experienced at his home Grand Prix.

– The battle that Arnaud Tonus and Max Anstie had in the first MXGP encounter was simply exhilarating. The pair were remarkably close too, as the difference between them never exceeded three seconds. It was a real game of cat and mouse but, rather than explain that with words, we’ll just let the figures do the talking.

– Speaking of Max Anstie, what happened to him in the second moto? ‘99’ got caught up in the second turn, because Clement Desalle bobbled, and charged right up from the back. The lap chart states that he made nine moves across the moto, but it does not include the influx of passes that he made before he crossed the finish line for the first time. That is a fact that is often overlooked. Kevin Strjibos actually started behind Anstie and made even more progress; he advanced from twenty-fourth to thirteenth at the chequered flag.

– Arnaud Tonus (first), Max Anstie (second) and Martin Michek (seventeenth) were the only riders in the premier division to secure a season-best finish. Tonus will not have a chance to match that in the coming weeks, because of the injury that he sustained, as he is not expected to return until the Monster Energy MXGP of the USA at the earliest.

– A majority of fans wanted Jeremy Seewer to claim the overall at the Grand Prix of Switzerland, but a first-turn crash in the second moto made that difficult to achieve. The speed that he possessed around Frauenfeld-Gachnang was still extremely impressive, however, even when he was stuck in traffic in that second encounter. The table below shows how his lap times compared to the leaders at the beginning of that race, despite the fact that he had to weave around slower riders.

– Jeremy Seewer made a ton of passes in that second moto on Sunday, fifteen to be exact, and moved from third to first in the opening race also. ‘91’ did not make the most passes across the weekend though; Hunter Lawrence made twenty-three moves across both motos and consequently garnered bonus points on Fox MX Manager. If you include the passes that he made at the Grand Prix of Belgium, Lawrence has made forty-seven moves across two rounds.

– Before getting too far ahead, it seems like a good idea to look at what went on at the end of the first moto. The record books state that Jeremy Seewer was triumphant on home soil, and rightfully so, but it was much closer than he would have liked. Seewer actually had the race under control with around five laps to go, but caved under the pressure and made some large mistakes that really could have been costly.

– The final three laps undoubtedly cost Jeremy Seewer, but it is easy to see where the time was lost. Sector one, which ran through the first couple of corners, was particularly tough on the Suzuki World MX2 pilot, as the table below displays.

– Benoit Paturel obviously achieved brilliant results at the Grand Prix of Switzerland, but he still had to work forward to get to that point. The fact that he managed to start third in the second moto was a major improvement, however, as the last time that he ended lap one inside of the top three was at the muddy Grand Prix of Russia. The Frenchman has now made two hundred and nine passes across the thirty motos that have been run this season.

– There is no denying the fact that this has been the greatest season that Thomas Covington has experienced. ‘64’ has been capable of podium finishes on all surfaces, no matter the weather, and made leaps forward that will undoubtedly make him a title contender next year. Just how much better is he though? Well, his average haul of points when he last contested the first fifteen rounds was six. This year, however, it is thirteen, so it has more than doubled! Bear in mind that the American has not scored points in four motos this year – that obviously dragged his average down.