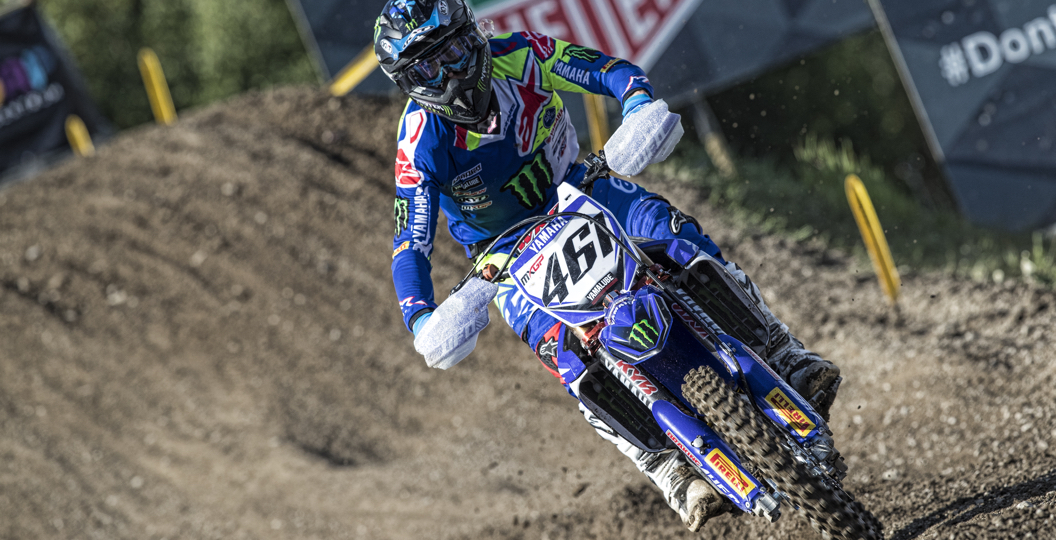 – The Grand Prix win that Tim Gajser acquired on Sunday was his tenth in the premier division and first with a 1-2 scorecard. Gajser has had those results aboard a 450F once before, at the Grand Prix of France last year, but he did not claim the overall on that day. Romain Febvre beat him on a tiebreak. It is worth noting that Gajser claimed two victories in the MX2 class with a first and a second though.

– The drought is finally over, as Romain Febvre returned to the overall podium at the Grand Prix of Sweden and even won a moto. Three hundred and seventy-nine days had been and gone since he last stood on the podium at the Grand Prix of Switzerland a year ago. What about the gap between his moto wins? ‘461’ went four hundred and forty-two days without one of those, as the last one came at that French event referenced in the previous point.

– The final MXGP encounter at Uddevalla was set to be rather enthralling; Tim Gajser chased Romain Febvre in the early stages and posted competitive times. Febvre edged away through the middle part of the heat, however, and established a comfortable advantage by the end.

– How dominant was Romain Febvre in that second encounter? ‘461’ was the fastest rider on track on nine of the eighteen laps. Tim Gajser was the quickest guy on four of the laps and Glenn Coldenhoff was twice. Kevin Strijbos, Clement Desalle and Jeremy Van Horebeek were each the quickest on a single lap.

– Romain Febvre became the ninth winner of a moto in the premier division with that Swedish victory; Antonio Cairoli, Shaun Simpson, Tim Gajser, Gautier Paulin, Jeffrey Herlings, Max Nagl, Clement Desalle and Arnaud Tonus have also won this season. Eli Tomac has the potential to win at the USGP next week, of course, so this figure could rise in the near future! There were just six winners across the whole of last season, but nine the year before that.

– Seeing as a chain issue forced Jeffrey Herlings to bow out of the second moto at Uddevalla, just four riders in the premier division have scored points in every moto that has been run thus far. Antonio Cairoli, Clement Desalle, Gautier Paulin and Romain Febvre have achieved that. With that in mind, it is quite remarkable that Febvre is still behind Tim Gajser in the series standings. Gajser has not scored points in five of the motos this season.

– It would be quite the milestone if Gautier Paulin manages to score points in every single moto, as he has not managed that at all throughout his career. Paulin has come close to it a handful of times, like two years ago when he failed to score points in just one moto. The closest that he came in his MX2 career was aboard a Bud Racing Kawasaki in 2009 – he scored points in twenty-seven of the twenty-nine motos.

– For whatever reason, Glenn Coldenhoff seems to always come alive in the second half of a season. Coldenhoff was obviously a part of the KTM sweep at the Grand Prix of Belgium at the beginning of the month, but since then he has had a consistent presence inside of the top five. Is proof of this needed? That can be found in the table below.

– What happened to Max Nagl at the Swedish Grand Prix, an event that he won in 2009? A mistake in the first moto, which occurred when Romain Febvre crashed ahead of him, caused his brake lever to snap. Another rider landed on him in the second encounter, but he recovered and then charged back to fifteenth. Just six measly points were added to his championship total at the sixteenth round of the FIM Motocross World Championship.

– When was the last time that Max Nagl scored six points or less at a Grand Prix? Nagl did not take any points home in Indonesia earlier this year, but a one-moto format was implemented at that event. No points were claimed at the MXGP of the USA in 2015, which was held at Glen Helen, despite the fact that he started each moto. Nagl pulled out of moto one just six laps in and then did not even complete a full lap of moto two.

– Kevin Strijbos had a rather difficult day at Uddevalla, as he garnered just eight points, hence why it is so surprising that he had the third-fastest lap of the second race. An injured ankle was the reason for his lacklustre results; he ran it over in the first moto and then had to ice it between motos. “I twisted it really badly and it was really painful,” he said in a press release. “I couldn’t stand on it and it was throbbing in my boot – if it does that I know it’s not good. I even thought it could be broken, so I pulled into the pits and got my boots off.”

– Thomas Covington stole the show at Uddevalla, as he charged past Jeremy Seewer in the final turn of moto two and edged him out for the victory by just 0.055. It was that close! How did Covington, who will represent Team USA at the Motocross of Nations in October, make up that time though? The table below carries the details.

– It was on the thirteenth lap that Thomas Covington moved past Hunter Lawrence for second. That would explain why that lap was his slowest, as he was obviously tussling with the rookie, but the fact that the fourteenth lap was just as slow is rather intriguing. It was not just one mistake that cost him that time around, as his times suffered in sectors two and three. Sector two was actually a strength for Covington through the first part of the race – he was quicker than Jeremy Seewer on nine of the first twelve laps. Something must have clicked for Seewer after that, however, as he was better than Covington in sector two through the final five laps.

– The progress that Thomas Covington made on that final lap was incredible and, hey, even the fact that he lost time in the second sector couldn’t stop him. The sector times from that last lap are available below. The lap that he eventually recorded was the fastest of the race and quicker than any of the times that his competitors recorded in the first encounter too.

– The past two rounds have been great for the United States of America. Thomas Covington and Darian Sanayei were both in the top eight in the overall classification for the first time at the Grand Prix of Switzerland and then, one week on, they managed it again at Uddevalla! The Monster Energy MXGP of the USA is going to be a big one for those guys.

– It is quite remarkable for a rider to set their fastest lap right at the end, but how often does it happen? More than one would think. Brian Bogers set his best time on the final lap of the second moto at the Grand Prix of Switzerland one week ago. That was obviously not the quickest time of the race, however, so not as impressive as what Thomas Covington achieved on Sunday.

– This has become a regular segment in this feature on MX Vice. Benoit Paturel has been hindered by bad starts all season, which has been well-documented, and made two hundred and nine passes prior to the Grand Prix of Sweden. Paturel again made more passes than anyone else at Uddevalla, as twenty-one moves were made across the two motos that were run. That means that his total has now reached two hundred and thirty. Is it possible that he will hit the big three hundred before the end of the season?

– Benoit Paturel was expected to be a title contender this season, but he may not even finish inside of the top three in the series standings. Starts have contributed of that, of course, but just how bad have they been in comparison to his competitors? ‘6’ has obviously made two hundred and thirty passes through the thirty-two motos that have been run. Pauls Jonass, the current series leader, has only made fifty-seven moves across the same number of heats. Good starts have made his life so much easier.

– Conrad Mewse acquired a career-best finish at the Grand Prix of Latvia in May, as he finished third in the second moto. Mewse did not quite match that in Sweden over the weekend, as he had a fourth in moto one, but a consistent scorecard left him in fourth overall at the end of the day. That was the best overall result of his career – he only managed to take fifth at that Latvian fixture. The last time that a British rider finished that high up in MX2 was when Max Anstie, who actually had exactly the same scorecard as Mewse, did it at Glen Helen last year, which was three hundred and forty-six days ago.

– Conrad Mewse was the best-placed rider on the Rockstar Energy Husqvarna Factory Racing team for the first time at the Grand Prix of Sweden, as he edged Thomas Covington out by just a single point. The third rider on the team, Thomas Kjer Olsen, was tied on points with Covington too! Olsen has been a revelation this season, but has dropped off somewhat in recent weeks. Do you need proof of that? Two hundred and sixty-four points was his total after the first eight rounds. However, two hundred and thirty-three points have been acquired over the last eight rounds.

– Consistency has actually been a strength for Thomas Kjer Olsen, as he has scored points in every single moto this season. No other rider in the MX2 division has managed that thus far. Pauls Jonass failed to finish a moto in the Indonesian mud and then, of course, Jeremy Seewer had that mechanical issue at the Grand Prix of Latvia.