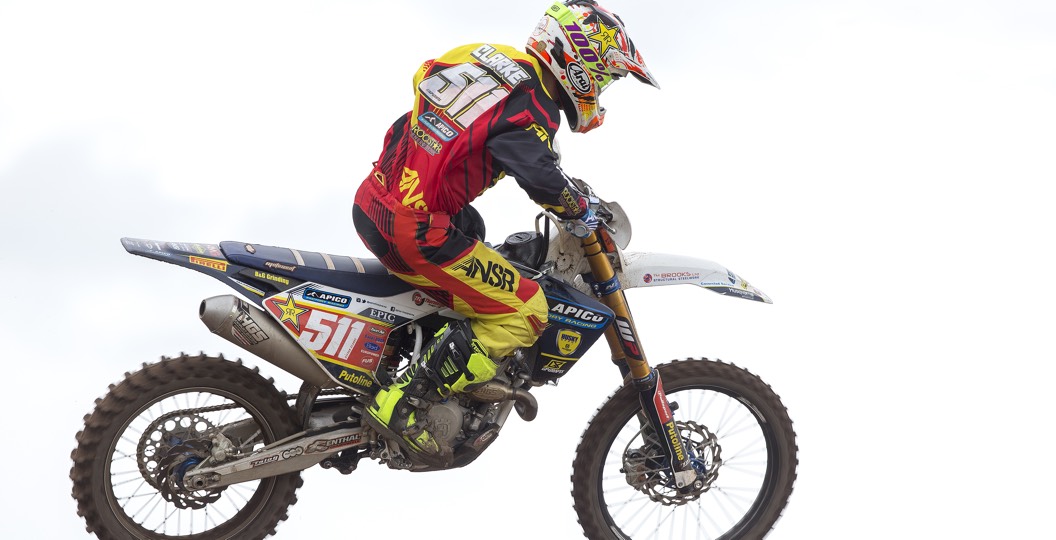 We all endured a fairly uneventful 2015 Maxxis British Championship, as Shaun Simpson and Max Anstie dominated each week. Good things come to those who wait, however, as both classes are wide open this year. The current MX2 standings, specifically, could turn upside down by the time that the final chequered flag waves at Foxhill.

Steven Clarke currently leads by the smallest of margins, but one mishap would see him demoted to fourth. All it would then take is a good moto and he could be back at the head of the table. It is that close. Seeing as there are now just six motos remaining, it seemed fitting to break each contender down.

We, of course, must start with the current series leader. Although Clarke was forced to withdraw from the first moto of the year, consistency has undoubtedly been his greatest strength since then. If you take that DNF out of the equation, his average finish has been a third. That is what helps you win championships, folks! Canada Heights was where he was at his best and, taking the conditions there into account, you could perhaps expect similar rides from him at Blaxhall and Foxhill.

His starts have been a bit of a problem lately, although he rebounded somewhat with a holeshot at Leuchars, but they were not bad at all through the first three rounds. ‘511’ is clearly capable of getting out of the gate, so there is no reason to doubt that aspect of his programme. All in all, Clarke appears to be a formidable contender and one who will be tough to topple.

Taking an unconventional route, it seems appropriate to jump to the man who sits fourth and is the winningest rider thus far. Adam Sterry obviously missed round one and has been playing catch up since then, so the fact that he sits just fifteen points back with three rounds remaining is pretty good. It is completely hypothetical, but if you give him a brace of sixths at round one (that is a scorecard that he is obviously more than capable of acquiring) then he would be fifteen points ahead right now.

Sterry seemingly has the pace, consistency (he has not dropped out of the top two since April) and ability to start up front. That will be a tough combination to beat, quite truthfully. What could be his Achilles heel in all of this? Beating Clarke at Foxhill could prove to be difficult, but he just needs to ensure that he gets the most out of Blaxhall and then Preston Docks. The latter is a circuit that he will be the clear favourite at.

Martin Barr currently occupies second in the MX2 standings, as he has one more moto win than Bryan Mackenzie. If the series were to end like this, the extra victory would break the tie between the two. That may actually be something worth paying attention to as this thing goes down to the wire; tie breaks may have to come into play.

Back to Barr, anyway, who has had a turbulent campaign thus far, with freak issues (Lyng), injuries and first-lap crashes (Desertmartin). The fact that he is still in this thing is actually a little surprising, when you lay everything out like that. ‘50’ is typically considered a sand specialist but has performed well at Foxhill in the past also, so his versatility may be his greatest strength. Starts are clearly his weakness though.

Tenth is the position that he has started each moto in on average, but that figure obviously crashed massively after Desertmartin. Even taking that out of the equation though, he has started in the top five in four of the ten motos run thus far this year. That may not sound too bad, but it could make a difference as some spoilers come into play.

Bryan Mackenzie is currently tied with Martin Barr, as mentioned above, and has actually been remarkably consistent recently. He has more podium finishes, seven to be exact, than anyone else and has had an average finish of third since round two. Admittedly the most recent round was not the best for him, but the fact that he still salvaged a brace of thirds on what was an ‘off’ day was positive.

His starts have been incredibly good in seven of the ten motos, but in the other three they have been atrocious. It seems there is no in between, as he has either started in the top three or way outside of the top ten. The good news for him, however, is that he has only done the latter three times, so the chances of it happening a lot through these last three rounds are slim. If it were to happen again, however, it could stop him from making a serious push for this title.

The spoilers, alluded to previously, should get amongst these four and steal some points. Mel Pocock has the greatest chance of doing this at Blaxhall, then Ben Watson should be up there when he returns too. I actually believe it will be this that decides the championship. If Sterry manages to win a moto this weekend and Pocock chases him across the line, he would make up five points on whoever finishes third in that one race alone! Every points counts at this stage, so it really is an exciting time to be a fan.