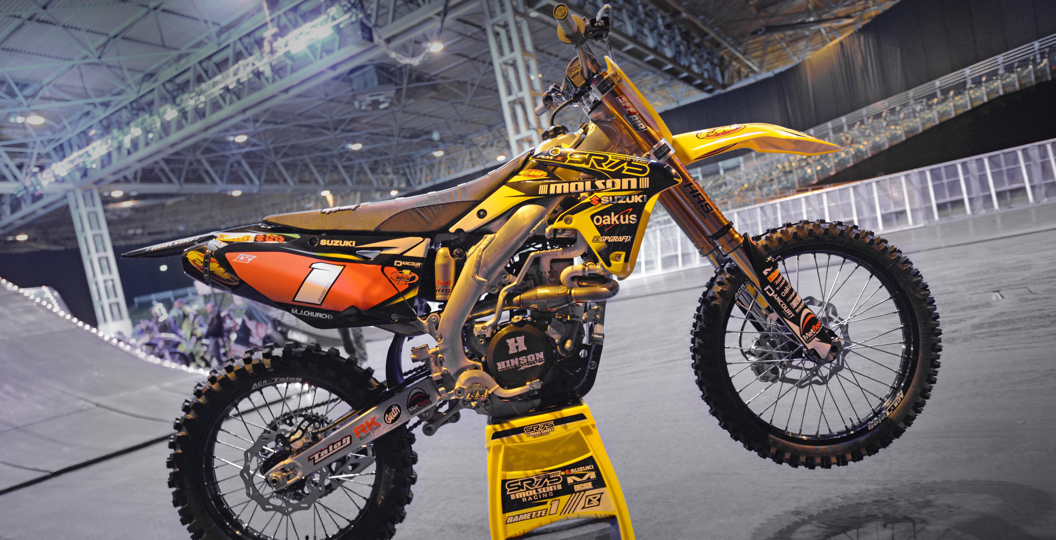 Following the news that SR75-Molson Racing will officially represent Suzuki on next year’s Monster Energy Arenacross Tour powered by Ford Ranger, the team unveiled its 2016 RM-Z450 colours at the NEC Motorcycle Live Show in Birmingham at the weekend, ready for the season opener in January.

Running under the official entry of SR75-Molson Racing Suzuki, the team, headed by Geoff Walker, has previously enjoyed support from Suzuki in the Arenacross Championship, having contested the series with RM-Z450 machines since 2014 and clinching two team titles and the 2015 rider championship with Thomas Ramette, who returns to defend his title in 2016, alongside Cyrille Coulon.

Suzuki GB Marketing Manager, Rob Cooper said: “Geoff and his team have a truly enviable reputation in Arenacross racing. Their performances and results against some of the top teams in the series can only be described as a genuine David and Goliath feat, so we are honoured and proud to increase our support with official status this season.”

Team Principal Geoff Walker commented: “This is the next stage in the evolution for SR75. We’ve enjoyed technical support from Suzuki over the past two seasons, but to reach an agreement for official team status is great news for both us and the series as a whole. We came and we conquered last season with Thomas on the Suzuki, while Cyrille had a tough championship due to injury, but still finished fourth. With the help of our sponsors and partners we go into the 2016 series stronger and hungrier than ever before with our sights set firmly on championship glory.”

The SR75-Molson Racing Suzuki team will commence testing shortly, ready for the first round of the series at Manchester Arena on January 2nd.