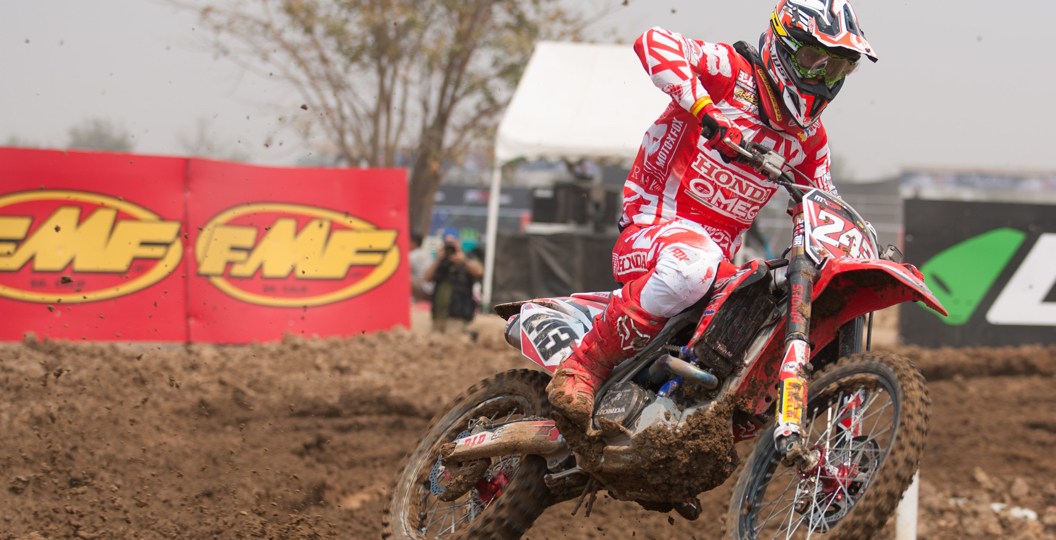 Both Tim Gajser and Jorge Zaragoza delivered good qualifying performances today, and whilst the results weren’t everything they could have been, both riders are looking positive for tomorrow’s MXGP of Thailand.

In the MXGP class, riding the Honda CRF450RW, Gajser initially got off to a good start until muddy conditions on the inside of turn one slowed him up. Exiting the first corner in eighth, the championship leader wasted no time in cutting through the pack to climb to fifth within the opening laps. He had closed the gap to fourth position to just 0.2seconds, until two mistakes cost him time and, especially with the energy-sapping heat and humidity today, decided to take it more easy and come home fifth.

Meanwhile in MX2, Zaragoza overcame a start that was not his best to soon climb to a high of ninth, looking comfortable on the CRF250RW in what were very challenging conditions as the track became ever-more rutted. Unfortunately on the third lap the Spaniard had a small crash that demoted him to 19th, although he continued his strong performance to recover to 13th by the flag.

For Jorge, race one gets underway at 1215hrs local time tomorrow under a sun that promised to be just as hot, and Tim’s race one starts one hour later.

Tim Gajser: “The start was pretty tricky today. From the inside gate I think after 30 metres it was really muddy. The first few metres from the gate I think I was in front of everybody, but when my front end touched the mud it slowed me so everybody went round me. I was quite back, around tenth, but then I passed many riders and came to fifth almost immediately. I was pushing behind van Horebeek but then I made two big mistakes and lost ground, and I saw it wasn’t easy to make the gap back up here so I just took it easy with no risk. I also didn’t feel so good today – I was really hard on the bike and didn’t ride so smoothly and let the bike flow, but we’ll change this for tomorrow and fifth is a good enough gate pick.”

Jorge Zaragoza: “The start was not good – I started in a bad position but then at the start I could pass quite a lot of riders in a few corners so I was up to ninth. Then I had a stupid mistake and had a little crash – there was a hole and I tried to go a little more to the outside and hit the hole and fell down. But after that again the riding was good so we hope tomorrowto have a good start and stay on the bike. There are some ruts that are so deep it is difficult to make a good corner because you must miss them, but that’s how it is. It was hot today and it does make it hard, but I had weather conditions like this in Valencia so I feel a little bit at home and I don’t feel it so much.”

Giacomo Gariboldi: “I think nobody wanted to risk too much today with the heat, and Tim was easily in fifth position in the qualifying race which is good for tomorrow so he didn’t need to take any risks today. He fought back well from eighth at the start and then could just hold position to the finish for a good gate pick tomorrow. Jorge too was up to ninth in his race which was much better, and then unfortunately he had a little crash but could still come back to finish 13th so I’m pleased we see an improvement. He’s not suffering the heat too much so we will see what he can do tomorrow.”