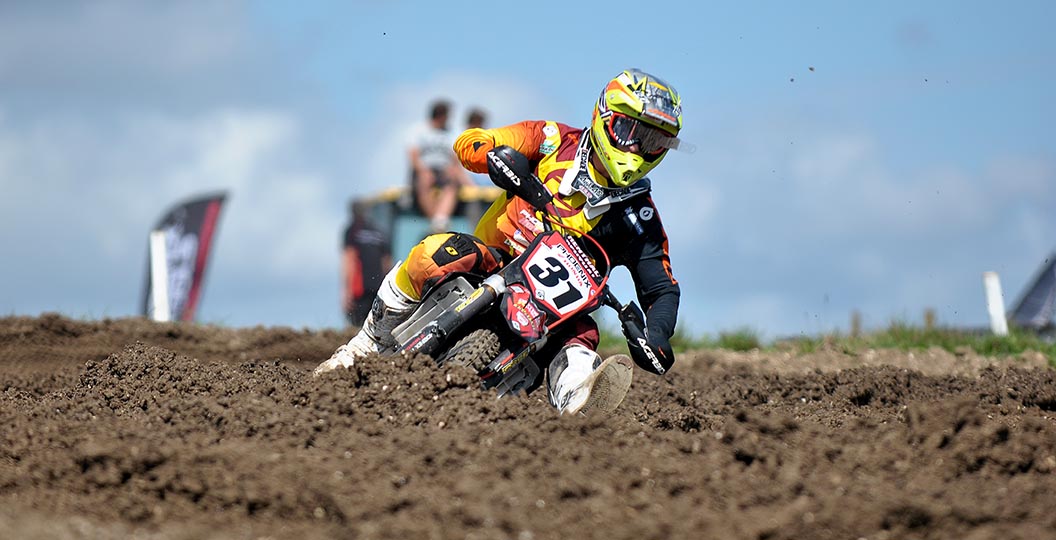 Last Sunday the Phoenix Tools Premier Motocross Championship made its way back into Wiltshire to Cusses Gorse for round 8 in the series. The track as it was for the British Championship round prior had been prepped to perfection and was heavily dosed with water early morning to produce some really good racing.

In the Phoenix Tools Expert Open class the day started with drama in the qualifying session as championship leader Luke Hawkins on the Phoenix Tools Rocket Honda was to grind to a halt mid session with a bike problem. Luckily for Luke he had enough time to run and get his spare bike to put in a quick lap or two. In the opening race it was a blistering start from fellow Phoenix Tools Rocket Honda rider Alex Snow who had set the fastest time in qualifying from the St Blazey Husqvarna of  John May and the TwoNineTwo / Factory Touch /  St Blazey Honda of James Dodd, but Hawkins however had a terrible start and was well down the field. Snow was in a real hurry at the front and by the end of the opening lap he had a full 4 second lead over May who was now being pursued by Luke Dean on the Bike Station / Meredith Mx Suzuki after Dodd had gone down on lap 2. Hawkins was flying up through the field and by the end of lap 3 he was breathing all over Dean, but it took him a further lap to find away pass and was soon to catch May. Hawkins was all over May, Jamie Skuse on the Tony Maunders Racing Suzuki had now caught Hawkins to make it a three way battle until lap 7 when May made a slight mistake and through went both Hawkins and Skuse, but they weren’t going to catch Snow who was well gone and took an easy win by some margin.

In the second moto again it was Snow with the best start from Sunny Thompson on the D S C Kawasaki with Hawkins there in 3rd, but it wasn’t long before Hawkins got the better of Thompson and moved up in to 2nd. Snow literally was in overdrive at the front and was soon in to his rhythm and was pulling away all the time from Hawkins who didn’t seem to have any answer. Skuse had moved up in to 3rd on lap 2, but the real battle was to go on for 4th and 5th mid race between wildcard Matt Bayliss on the Wooldridge Demolition Honda and May with some really tight racing with May eventually getting the better of Bayliss 3 laps from the end to take 4th behind Skuse, Hawkins and Snow.

In the last moto this time it was Kelvin Townsend on the Phoenix Tools Rocket Honda who had the early lead from Snow and Dodd, but within a couple of corners Snow was to hit the front and was soon on his way. Hawkins was to move up in to 3rd on the opening lap after passing Dodd and was desperate to get pass Townsend which wasn’t to be until mid way through lap 2 which had let Snow get away a bit at the front. May and Skuse again were to have a real tussle with each other mid race with May eventually getting the better of Skuse. By the end of lap 8 Snow had a commanding lead over Hawkins, but Snow was to come off a lap later when his front wheel went away, luckily his bike remained running and he was soon to be on his way again and from there went on to take a hat trick of wins to close the gap on Hawkins in the Championship to just 34 points with two rounds remaining.

In the Tyremarks Junior Championship class there was some really good racing with wildcard Zac Alsop taking the hat trick of wins, but not without a fight, especially in race 2 when it was George Fountain who was to set the pace early on, but unfortunately Fountain went down hard on lap 3 and it was Lewis Barfoot who took over, but breathing all over Barfoot for several laps was Alsop who was determined to find away pass, but Barfoot held strong until 2 laps from the end when Alsop got the better traction through the whoops section and from there went on to take the win, but it ended with a productive day for Barfoot with three consistant rides was to haul back 40 points on Championship leader Jack Stevens who had not the best of rounds.