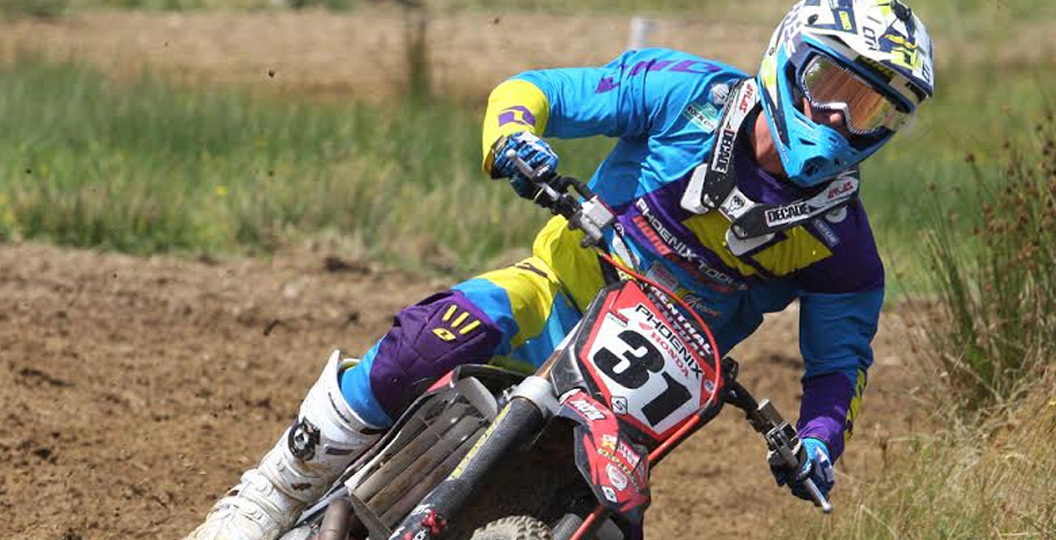 Last Sunday the Phoenix Tools Premier Motocross Championship returned back in to Devon to the really fast flowing Garlands Moor Moto Parc, Nr Holsworthy for round 7 in the 10 round series. Water had to be put down prior to the meeting and during, even though heavy rain had fallen on the Saturday and during the night.

In the Phoenix Tools Expert Open class numbers were a bit down, but never the less there was still plenty of talent on hand to produce some really fast and exciting racing. Alex Snow on the Phoenix Tools Rocket Honda had set the quickest time in qualifying and he had the inside gate pick which seemed to work wonders for him as he was to have the best start in the opening race, but hot on his heels for the opening couple of laps was the St Blazey Husqvarna of John May who was giving his all as not to let Snow get away. Championship leader Luke Hawkins also on a Phoenix Tools Rocket Honda was there in 3rd and was soon to be all over May and moved up in to 2nd a lap later and was now after Snow at the front. James Dodd on the TwoNineTwo/Factory Touch/St Blazey Honda was a rider on a mission back in 4th and was soon to be closing in on May who he had a real scrap with before eventually getting pass on lap 6 and now had his sights set on Hawkins who was soon under pressure and he was to go down when his front wheel washed out going in to a right hander and through went Dodd in to 2nd, but he wasn’t going to catch Snow who took the win with Hawkins coming back to take 3rd. In the second moto again it was Snow with that best line going in to the tight left hand first bend with May there again in 2nd from Hawkins. May just as he did in the opening race early on stuck with Snow, but eventually Snow got away on lap 3 and May now had Hawkins breathing all over him who found away pass May on lap 4. Dodd again was on a mission and after a tussle with the Tony Maunders Racing Suzuki of Jamie Skuse was soon looking to get pass May and this turned in to a battle and a half with Skuse also joining in. Dodd eventually got pass May two laps from the end when May lost traction out of a left hander but he wasn’t going to catch Hawkins who took 2nd behind winner Snow. In the last race Snow was there again, but this time it was Hawkins who was right on his tail with May right there in his wheel marks. Snow was soon in to his rhythm and was starting to get away, May momentarily went pass Hawkins on lap 3, but then found him self going off the track in to a ditch and back in to 2nd came Hawkins. May was to rejoin and was soon back on it clawing his way back up through the field and found him self back in 3rd until 3 laps from the end when he was in a lot of discomfort in his leg from his earlier crash and dropped right back. Snow was to go on to make it a hat trick of wins with Hawkins taking 2nd with Skuse 3rd.

In the Over 35 Championship class the day yet again belonged to Championship leader Nick Life on the Gibbs Performance/St Blazey Yamaha who was to produce three comfortable wins to increase his Championship lead with three rounds remaining, and it was much the same in the Over 40’s and Over 50’s class with Chris Brown on the TwoNineTwo/Factory Touch Honda and Mark Gleadhill both taking hat trick of wins

In the Tyremarks Junior Championship class there was some really good racing especially between the leading two in the Championship, Jack Stevens and Lewis Barfoot with Barfoot taking a hat trick of wins with Stevens a close 2nd in all three races. Josh Taylor and Jason Brooke who was out on a 450 for the first time were to have a real tussle all day and were thrilling the spectators with some really close racing battling it out for 3rd and 4th in all three motos.