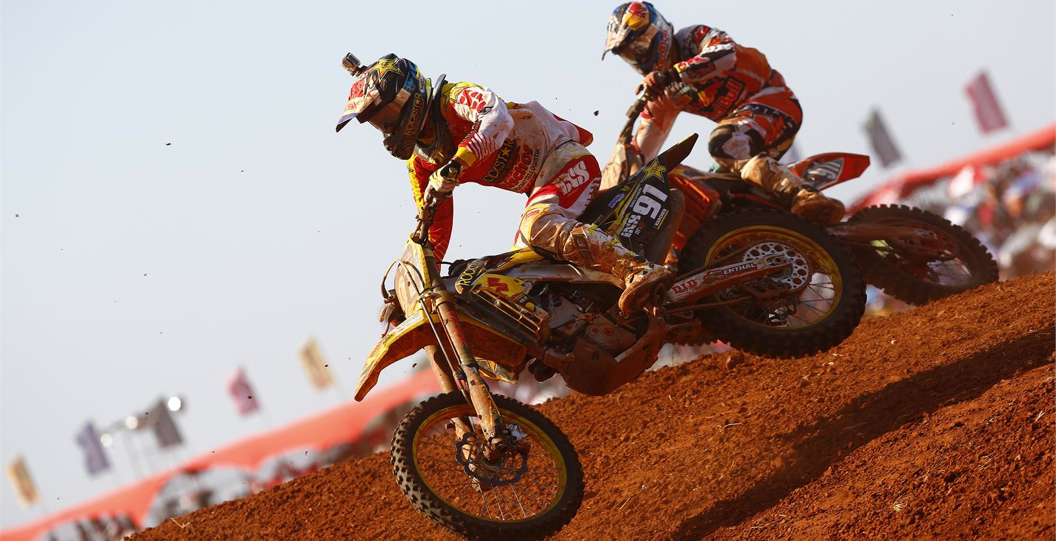 Seewer runs up front in MX2

The 16th round of 17 in the MX2 category saw Rockstar Energy Suzuki Europe’s Jeremy Seewer claim seventh position overall on the factory RM-Z250 in what was the series’ second encampment in the county this year.

The new Trindade circuit was aerially-spectacular thanks to the wide-range of different jumps and leaps and was immediately distinctive courtesy of the dry, red hard-pack mud. The mercury climbed above 30 degrees as the thermometers marked the penultimate fixture as one of the hottest of the season.

Seewer immediately set some impressive speed on Saturday and a potential best-qualification position of his rookie term was ruined by a rear brake problem. Undeterred, Seewer unveiled two excellent starts on Sunday. In the first moto he lost too much time trying to overtake Jose Butron and then slipped into an intense battle with his team-mate Glenn Coldenhoff that he eventually won by crossing the line in 10th. In the second race the 20 year old battled hard with riders with far more experience. He ran as high as second place for five of the 17-laps and only just nudged down the order in the final laps. Fifth position still meant that he equalled his career-best; achieved in the first moto in Trentino earlier this year.

Coldenhoff, competing in only his second Grand Prix after recovering from a knee reconstruction, didn’t benefit from decent starts and also did not push to take any major risks around the Brazilian hard-pack. The Dutchman rode to 11th and 10th positions for 11th overall.

The Grand Prix of Mexico is now the last fixture on the FIM Motocross World Championship for Rockstar Energy Suzuki Europe and will be the final MX2 meeting for Coldenhoff as ‘#259’ will switch to MXGP for 2015. Seewer will be hoping to use the race at the new Leon circuit to round-off a superb rookie season in MX2 and confirm 10th place in the standings.

Jeremy Seewer: “A good and bad GP. On Saturday my feeling on the bike was great but I had some bad luck in qualification because my rear brake failed and I dropped back a little bit. They changed the track today because it was too easy and there were more bumps. In the first race I had a pretty good start and was in third. I struggled to pass Butron and some other guys. It was really difficult in that first race because it felt like a different track out there. It was fast with a lot of grip but there were edges everywhere. When I eventually found a rhythm the race was as good as over. Butron cut my line at the start of the second race but I made some passes straight to second position. I was so close to the podium but couldn’t hold off Tixier and Ferrandis. Anyway, I’m quite happy with fifth and I’m looking forward to next week.”

Glen Coldenhoff: “It was a tough one today, especially with the heat. I felt that after a few weeks of training it went way better than before [in Lommel] even if it is not seen in the results. On this track everybody was almost at the same speed. I could see in front of me that the differences were really small and I couldn’t make ground today. We will keep fighting and working and try to be better next week.”