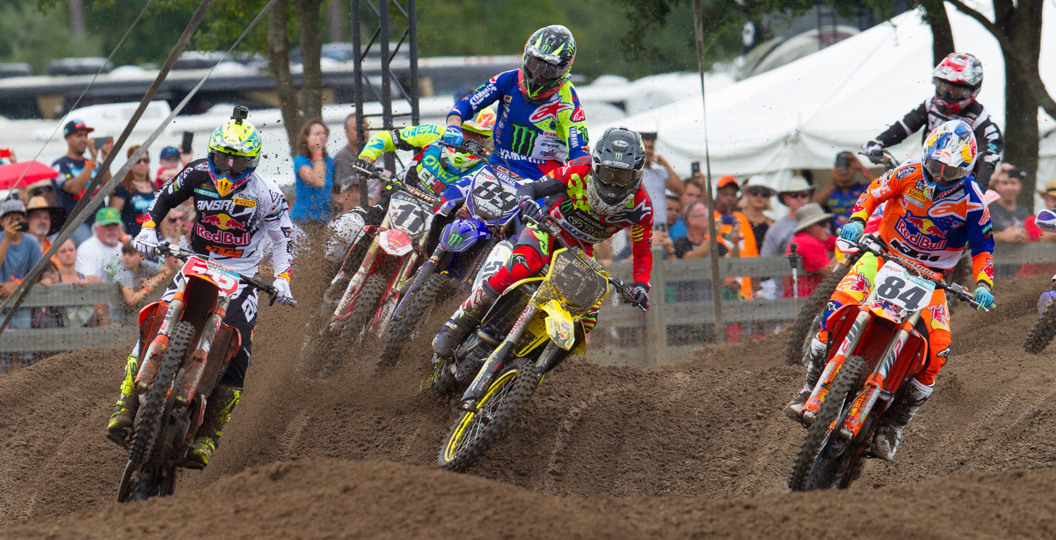 The first blows have been exchanged beneath glorious sunshine at WW Motocross Park, the site of the Monster Energy MXGP of USA. Jeffrey Herlings and Thomas Covington took brilliant victories in qualifying, which kept the crowd entertained, but a majority of the discussions revolved around those who did not make it that far.

It is fairly unorthodox to start a qualifying report with the absentees, but that is the direction that we are going to take this feature. Cooper Webb was the first casualty, much to the dismay of his squad, as he crashed out of free practice and walked straight towards the medical unit. The initial word from a Yamaha representative was that he was dealing with what they presumed was a broken scaphoid and then later on he was seen wandering through the paddock with a cast on his wrist.

It has become apparent that Webb desperately wants to ride tomorrow, despite the fact that it seems a small miracle will be needed, so do not be surprised to see him on the line. Is there much need for him to get behind the starting gate? One could argue that it would be a poor decision, but perhaps he is looking for more time on the 2018 YZ450F? Reports suggest that countless changes were made to his set-up this morning.

Adam Cianciarulo, on the other hand, will not be able to return to the race track, as he is already at his home in Florida with what is simply a tweaked knee. It seems that there is not much more to it than that. It was announced earlier this week that his teammate, Joey Savatgy, was set to race, but he was not in a position to compete when the weekend begun. That means that Justin Hill is now the sole representative for Monster Energy Pro Circuit Kawasaki in what will be his final outing aboard a green bike.

Although the USA took hard hits with those injuries, Thomas Covington still pulled through to take an emphatic victory for the stars and stripes. The race was all about the Rockstar Energy Husqvarna Factory Racing rider, truthfully, as he took the holeshot and checked out. “I feel really good,” Covington said when reflecting on his fourth heat win of the season. “Today went pretty much perfect. After about ten minutes I just started thinking about saving some energy for the motos, as it is pretty hot out here. I didn’t want to wear myself out today.”

The fact that Covington was the top American means that Justin Cooper, who had a simply amazing day, will get overlooked somewhat. European fans and insiders alike were left scratching their heads when Cooper stole the top spot in free practice this morning, but that really is not overly surprising. Cooper made his professional debut for the Yamalube Star Racing Yamaha team at Unadilla last month and took second place in a moto.

Although Cooper was beaten by Covington by six seconds in the qualifying heat, the gap really did not alter too much throughout. The timing sheets show that Cooper started second, as they begin recording at the end of the first official lap, but he actually worked his way around some of the top guys to get to that point. It would be quite the story (and not surprising at all) if Cooper puts a YZ250F on the top step of the podium for the second time this season tomorrow.

Not much went on behind the top two, as the race was fairly mundane. The Suzuki World MX2 duo were on the move throughout, as both riders had starts that were mediocre at best. Jeremy Seewer, who is watching his title hopes swiftly disappear, is struggling with an illness and did well to salvage an eleventh. Hunter Lawrence was the star beneath the awning though, as he went from fourteenth to eighth at the chequered flag. Starts continue to hinder the likeable Australian.

The focus quickly shifted to the MXGP division, once that MX2 qualifying race was complete, as fans were eager to see Jeffrey Herlings and Eli Tomac match up once more. That battle did not materialise though, as the latter struggled to get to grips with the new circuit. Significant changes were made to his Monster Energy Kawasaki in free practice, including a swift change of forks, but he even struggled in the session that followed that, as he was more than three seconds slower than the fastest rider.

The qualifying race was not much better, as he was restricted by a poor start. ‘3’ started fourteenth and then limped to twelfth at the chequered flag, right behind the reigning world champion, but thankfully the start here is one of the fairest on the Grand Prix calendar. An interesting side note is that Tomac skipped the post-race press conference, in an attempt to avoid the inevitable requests to compare the two series.

Jeffrey Herlings was present at that media event, of course, as he was beaming after such an impressive showing in the qualifying race. “I think we had a good qualifying heat,” he said. “The start was really good actually, I was second or third. I managed to pass [Romain] Febvre and Tony [Cairoli] on the first lap, then I made a little mistake and Tony got back past me. It was tough to pass. Hopefully tomorrow they fix the jumps, but leave the rest of the track pretty rough so we have some parts of the track where we can pass. Today I think the start was crucial, but hopefully the track will be a little more rough and hard tomorrow. We will see.”

It was hardly surprising that Herlings won, as he has been the best rider in MXGP at the previous three rounds. It was quite a shock to see Antonio Cairoli charge after his younger teammate early on in the heat, however, as he has been in championship mode at the previous two fixtures. The pair duelled for a couple of laps, but ‘84’ then dropped the hammer and pulled away significantly.

It is worth remembering that Antonio Cairoli will be able to claim the MXGP title tomorrow, if he beats Jeffrey Herlings by the slimmest of margins. Will he be willing to go all out in an attempt to get it locked up and out of the way? It is clear that he is willing to force the issue somewhat, based on the way that he performed today, but defeating Herlings could be a tall order. It is always worth noting that Herlings has an average starting position of seventh this season, so Cairoli may be able to break away early on.

Tim Gajser was expected to join that fight at the front, as he won in Sweden and also recorded the second-fastest time in free practice. The fact that he tossed his goggles early on in the qualifying heat obviously hindered him through a part of the race, just as you would expect, but he struggled to move forward before that. “Today was a bad day,” Gajser said. “I did not have the best start, so I was really far back in the pack. I could make some passes in the first two laps, then I made a small mistake and almost went down. After that I was stuck behind [Shaun] Simpson for all of the race and to top it off I lost all of my tear offs off of my goggles, so I was riding without them for the rest of the race.”

What happened to Justin Barcia, who finished at the back of the field? ‘51’ started fourth and then tussled with both Jeremy Van Horebeek and Gautier Paulin for a brief period. That came to an abrupt halt, however, when Barcia ran into the back of Paulin. Waved yellows were out on one of the countless large jumps, so Paulin rolled whilst Barcia jumped. Paulin got back up and salvaged an eighth, but Barcia’s bike was in too much of a mess to continue.

That is all from day one at the Monster Energy MXGP of USA. An abundance of stories emerged today, but the script could look very different tomorrow. The track should be drier and, consequently, favor guys like Eli Tomac and Tim Gajser a little more. Thunderstorms are still forecast for 16:00 tomorrow, so there is a chance that conditions will become treacherous.