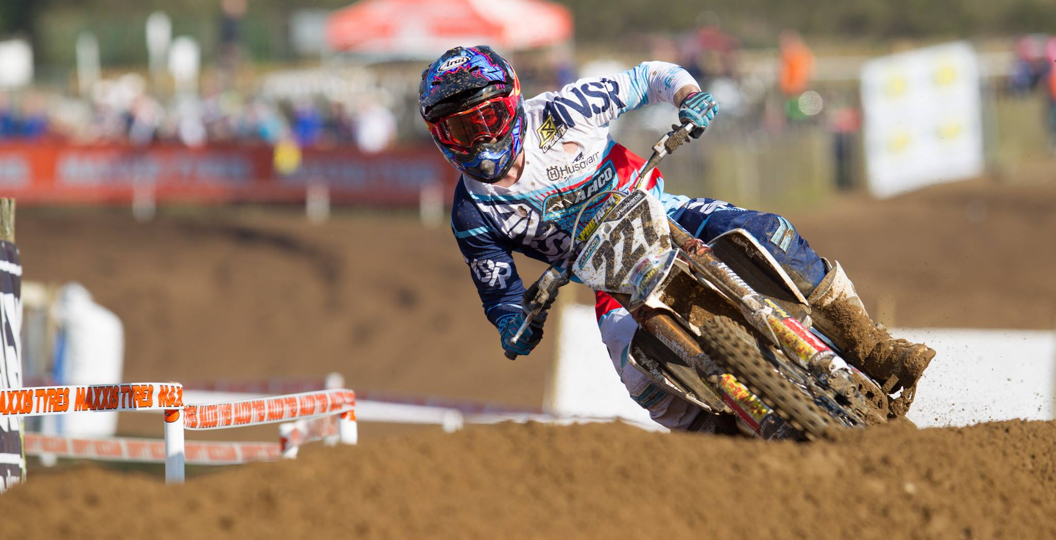 Following a positive start to the Maxxis ACU British Motocross Championship, supported by Pro Clean, at the opening round at Culham in March, the team travelled to the Norfolk venue of Lyng for round two. The traditional old-school sand circuit was perfectly prepared and watered, ready for the weekend’s racing in hot conditions. On Sunday morning the riders awoke to clear skies and blazing-hot sunshine.

Practice and qualifying saw the track in great condition and starting to produce some good lines, as the riders pushed for a fast time. Kristian Whatley was only able to finish the session as the eight-fastest rider, after struggling with slower riders on his flying laps, whilst Jamie Law finished the session in fourteenth with Matt Burrows just behind in seventeenth.

Following the lunch break it was time for the opening MX1 race and all three riders were looking for a good jump out of the start and into the first turn. Both Whatley and Law rounded the opening lap inside the top ten, with Burrows just outside the top fifteen, and all three were pushing forward. Whatley soon worked his way up to sixth place, behind Brad Anderson, and took advantage of a mistake to claim fifth at the finish, whilst Law moved up to eighth at the flag and Burrows crossed the line in sixteenth.

The second and final race saw Law make a great start inside the top five, whilst Whatley got slightly tangled with Jake Nicholls in the first turn and lost ground and positions in the opening corners. The pair ended the opening lap with Whatley in eighth and Law ninth, after a mistake on the first lap cost him some positions, while Burrows was in sixteenth. Whatley moved up to sixth place and looked set to close down Anderson as the race progressed, until a slight mistake saw him settle for the position. Law suffered a mid-race crash while in eighth dropped down the order, before suffering a technical on the last lap and being classified as fifteenth, just behind Burrows in fourteenth.

The team now have three weeks until the next round of the Maxxis ACU British Motocross Championship at Canada Heights on the 30th April.

Kristian Whatley: “Qualifying was not good for me today, as I felt like I had a really good pace but each time I got held up by a slower rider in the middle of the lap, so that was annoying, but I was still eighth-fastest and that is okay for the start here. In the first race I had a good jump but tagged with [Elliott] Banks-Browne, so lost some ground and was around tenth in the first corner, but made some good moves on the opening lap and got up to sixth behind Anderson and claimed fifth when he made a mistake.

“In the second race I had a better start but tangled with Nicholls and was lucky not to go down. Once again I worked my way into sixth after losing time trying to find a way past [Stuart] Edmonds. Overall it’s been a good day and we are getting there and there is more to come in the coming weeks.”

Jamie Law: “In the first race I got a good start, but rode tight early on and made a couple of mistakes. I got up to eighth at the finish. Then in the second race I got a good start and was at the front, but went over a berm on the first lap and then later in the race I lost traction on the take-off of a jump and crashed. Luckily I was able to get back on and continue, then the bike stopped on the last lap and I was classified as fifteenth. I got a few points.”

Matt Burrows: “The day started okay with seventeenth in qualifying and that gave me an okay position on the start. In the first race I didn’t get the best start, rode tight, got arm pump and finished in sixteenth. Then in the second race I rode a lot better after starting badly, but the final ten minutes I was really strong and pulled back to finish fifteenth.

Sean Burrows: “It’s been another strong day for us as a team. All three riders have ridden well and scored some good points. Jamie was a bit unlucky with the crash in the second race and with Kristian we need to just keep working, as it’s only his third race back since July last year. Overall it is all good progress.“