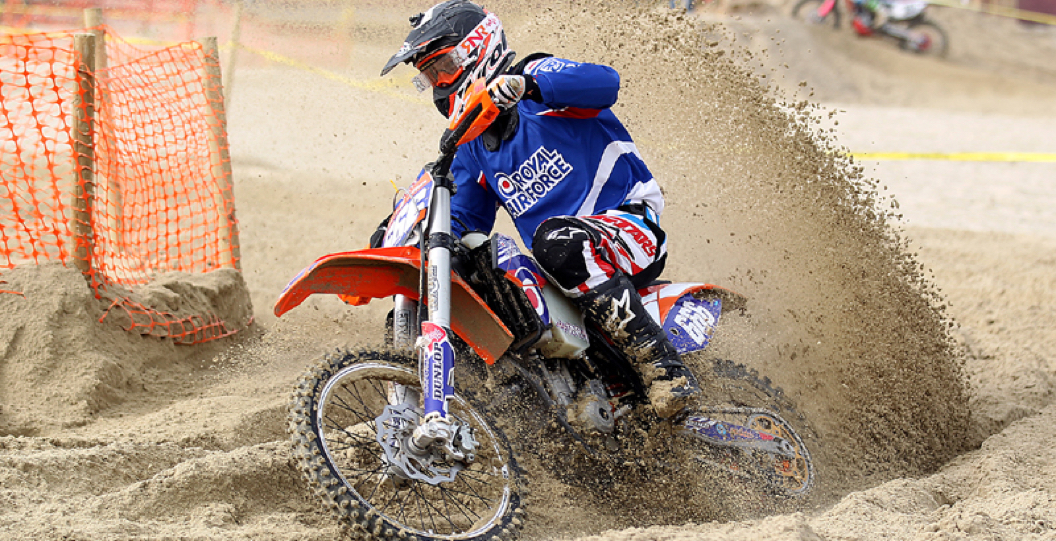 ten members, but the Purbeck MXC again pulled out all of the stops at the weekend to successfully promote their latest staging of the AMCA Weymouth Beach Race. Indeed this Weymouth event, run in conjunction with the Weymouth & Portland Lions Club and receiving total co-operation from all of the local authorities, aims to provide two days of entertainment for the whole family whilst raising money for charity.

Saturday started with a spectacular freestyle motocross display, beach buggy rides, dancing majorettes and an appearance from Andy ‘Gorilla man’ Hobbs aboard his performing quad bike. After that memorable opening to the weekend it was onto Sunday for the main motocross action, again witnessed by thousands of spectators who line the promenade walls to enjoy the totally committed racing free of charge!

Before that racing can start though there’s a logistical masterpiece to produce. After setting a few marker posts into the sand late on Saturday afternoon, the organisers then only enter the beach as soon as dawn breaks on Sunday morning. With the tide still in the process of retreating, an impressive array of heavy plant machinery goes to work constructing a challenging two-mile long circuit consisting of numerous twists, turns, jumps and of course a very inviting full throttle start straight!

With the track completed and an entry of nearly three hundred riders, including a competitor who had travelled down to the Dorset coast from Aberdeen, having enjoyed a practice session to sharpen up their sand riding skills, racing started promptly at 1pm. Following the six very entertaining battles which would then follow, the 2015 AMCA Weymouth Beach winner’s trophies eventually went to Harry Pritchard (Juniors), Brett Moore (Seniors) and Jake Shipton (Experts).

First up on Sunday was the Juniors class, as one hundred and eight warriors came to the line and stopped their engines, all eagerly watching and waiting as Jim Shipton, prepared to lower his flag to signal the blast off to the 2015 beach contest. Suddenly silence turned to ‘rolling thunder’ as the hungry pack charged along the Weymouth seafront to tackle the first series of jumps and turns.

On completion of lap one, it was Harry Pritchard leading the way with Sam Lycett, Tyler Groves, George Saunders, Tom Ayers and Elliot Browne giving chase. Lap four and Saunders moved up to third followed through by Jed Stockham, who was making impressive progress after initially gating seventh. Also working his way up was Tim Cole eventually earning sixth behind winner Pritchard, Lycett, Saunders, Stockham and Groves. Indeed that top six had really turned up the gas, finishing one full lap ahead of Brett Moore, the seventh place finisher.

In the Juniors race two, the impressive Pritchard led from start to finish with only Lycett, Stockham, Cole and Moore managing the same seven laps completed total. This race was to again see a great ride from Stockham who was right down in fourteenth spot on completion of the opening circuit. Early in the clash, Saunders had been holding second before being forced out on lap four. In another very competitive encounter, Groves, Robert Waters, Jamie Maller, Ryan Fox and Lewis Robinson completed the top ten.

Seniors race one saw Brett Moore grab the holeshot only to fall just as he was about to complete the opening lap. As Moore remounted in third, Jonny White took control ahead of Robert Reeve. Undeterred after that early tumble and his tasting of the fine Weymouth sand, Moore took just a further one circuit to regain his early advantage. Any hopes he held of going on to bag the win were to be finally dashed by Jamie Dixon, a rider on a serious charge!

Completing the opening lap in seventh, Dixon was up to second on lap five before eventually stunning Moore and scorching into pole position on lap eight. From here onwards, Dixon then remained very composed to snatch a great victory, finishing seven seconds clear of his rivals with Moore having to settle for second ahead of Ashly Campbell, White, James Ford, Jack Nixey, Reeve, Christian Seldon, Ian Norman and Mark Gale.

After just missing out on the win in Seniors moto one, Moore was desperate to make amends in the second sand blast, making a flying start to lead the pack. Quickly though Jamie Watts was on his tail and on lap six then moved into the top spot. However, Watts’ advantage was to last for just one circuit when after colliding with a backmarker going into a turn he dropped his KTM machine. Being in the right place at the right time, that fall for Watts enabled Moore to regain the advantage. From here onwards the Faringdon clubman galloped to victory as Watts picked himself up to still earn second ahead of Dixon, Campbell, Michael Bailey, White, Reeve, Nixey, Seldon and Gale.

Having recently returned from completing a year riding for the Unite of Emirates KTM out in Dubai, Jake Shipton certainly put his sand racing skills gained to maximum effect on Sunday. In both Expert motos, Shipton, who has now signed for Crescent KTM, blasted to victory by a massive margin, lapping the entire field except double runner-up and 2014 Weymouth winner Josh Waterman.

Although it was total plain sailing for the brilliant Shipton, there was certainly a heart stopping moment for the rest of the pack in moto one. On the charge away from the start line, Lee Wren in a position at the front of the main pack found grip, lifted and almost stepped off the back of his KTM, in the process drawing a loud collective gasp of horrified fear from the watching crowd! Thankfully though, Lee just about kept his wobble under control before regaining his composure to get home in seventh. With Shipton ripping through the sand to earn a very big win, a gallant Waterman chased him all the way for second with Jordan Carrier third, Leighton Joseph Holmes fourth, Ryan Allen fifth and another former Weymouth winner Richard Meakin in sixth.

Moto two and Shipton, the local hero and winner of the 2015 Patchquick Trophy, immediately took control before racing onto another massive win with Waterman again in second and Allen, Holmes, Jasper Uphill, Brad King and Carrier in the mix. So with the action over for another year it was presentation time as first Alf Stearn of the organising Purbeck MXC handed over a cheque for £1,500 to Les Board of the Weymouth and Purbeck Lions Club. The riders then received their hard-earned silverware before heading for home and reliving memories of another superb AMCA Weymouth Beach event.