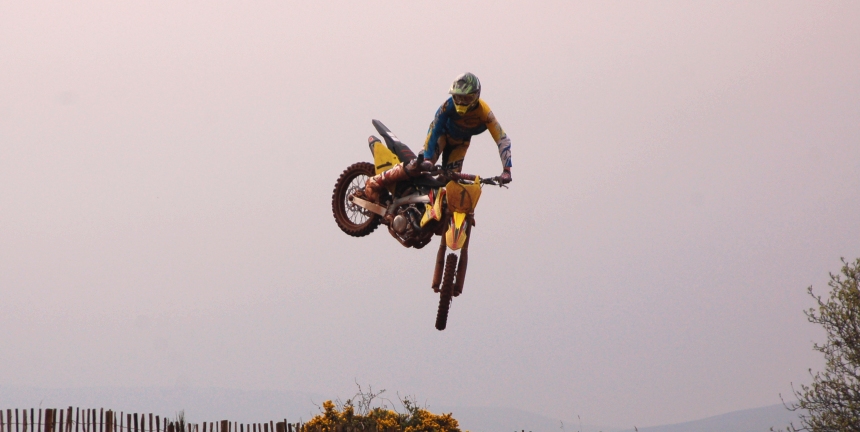 It was a brilliant days racing at Desertmartin with Graeme Irwin and Matt Moffat keeping the big Easter Monday crowd enthralled throughout day.

Irwin blew everyone away in qualifying with a time over three seconds faster than Moffat and Wayne Garrett in second and third. The Heads and All Threads Suzuki rider was doing huge whips in practice (and in the races) that  the crowd absolutely loved!

In race one Richard Bird got the holeshot and help Irwin back for a couple of laps before Irwin took charge and controlled the race. Bird then came under pressure from Gibson but upped his pace to ensure he stayed in second place. JAR Honda’s Matt Moffat went down early while in fifth and came from tenth back to fourth just in front of Wayne Garrett.

Race two was a cracker. Irwin had a bad start which was compounded by a big crash on lap one. Meanwhile Richard Bird was out front with Moffat and Gibson battling in the top five. Gibson got by Moffat and then went to the front and began to pull away after passing Bird. Moffat was now third as Irwin was blitzing through the field at a serious rate of knots.

Moffat got into second and began trying to reel in Gibson as Irwin went to third. Irwin was reeling in the front two and it looked like he would win when he started to drop back after losing his clutch. Bird then pressured Irwin as Moffat put the heat on Gibson and took the lead! Then with two lap to go Irwin regained his speed, passed Gibson and somehow caught Moffat but just ran out of time on the last lap to take the win.

It was a superb race that had the crowd running from fence to fence to see just who would win and if Irwin could take memorable victory but it was Moffat who ultimately got the glory in an impressive ride.

Race three was another epic race. Richard Bird took the lead early after Wayne Garrett got the initial holeshot.   But it was Irwin who got into the lead after a couple of laps and started to gradually pull away. Gibson and Moffat where going at it again after they got around Wayne Garrett but like race two, Moffatt got stronger at the halfway point as Gibson struggled to keep the pace. Moffat then got around Bird for second who was still trying to keep tabs on Irwin.

Moffat then turned his attention to Irwin and started to reel the Suzuki rider in! Irwin looked behind him but didn’t seem to be able to pick of the pace as Moffat made a push for the lead in the last couple of laps. Irwin though didn’t give in and held on for a hard fought win, Moffat took second with Richard Bird not far back in third.

In MX2 the Jason Meara/Glenn McCormick battle was over before it really got started after Meara crashed out of race one and injured his leg. He wasn’t able to compete in the next two races and this let McCormick take the overall win unchallenged. But McCormick rode well against the 450s in a bid to push his own pace up. Jordan Scott rode well for second on the Husky with young Luke Smith improving all the time and placing third.

Graeme Irwin:  Tough day, it was strange, I was really fast in practice the first race I was really tired still, I don’t think I had woke up! I only had three hours sleep last night.

In the second race the clutch went and I was lucky to finish, I couldn’t  use the clutch and had to be easy on the throttle, that race was kind of screwed for me. I crashed on the first lap as well as a bad start, I couldn’t believe I got second to be honest, I think the other guys got tired and I kind of stayed the same pace.

In the last race I think I had melted the engine in the second one! The bike had lost quite a bit of power – it is a completely standard bike. Coming back from injury and riding three days in a row isn’t easy either but I feel strong and I think I just need a nice sleep!