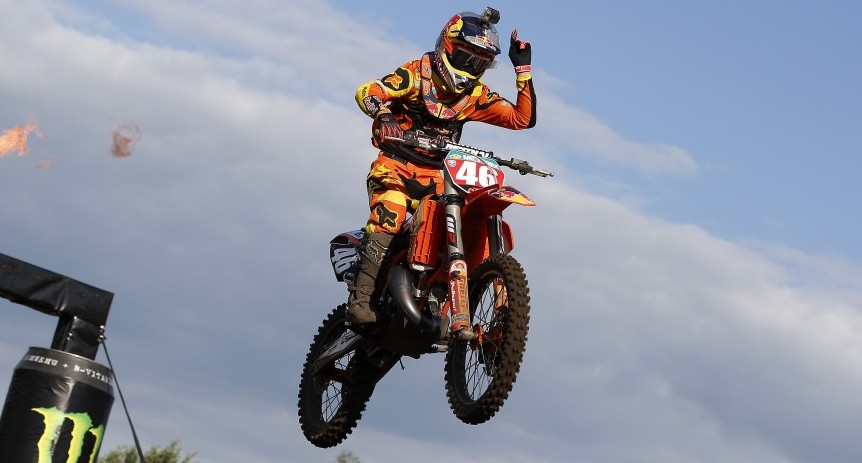 Catching Up with: Davy Pootjes

Davy Pootjes is the next potential Dutch superstar, coming off a very impressive production line in Holland. The 2012 85 European champion had a slightly difficult debut season in EMX125 last season with injuries setting him back at the beginning of the year. But, by the end, he was beginning to show the potential we all knew he had.

After some hard training this winter, Pootjes has come out swinging and is now the man to beat. Davy has won all but one race in the series so far and absolutely decimated the opposition in Valkenswaard in Holland despite a couple of niggling injuries.

Pootjes is the real deal and it won’t be long before the will be racing MX2 GPs. We caught up with the latest Dutch talent after his double win in Valkenswaard.

MX Vice: Perfect weekend for you with a 1-1, just like Jeffrey Herlings does! Does it feel good to that in front of the home crowd?

Davy Pootjes: It feels awesome, it was a really good race. The first moto I had a bad start and I crashed one time but I came back from seventh to first – it was quite an easy win. In the second moto I was second in the start and on first lap I passed the leader and again quite an easy win.

MX Vice: When crashed in race one, were you still calm?

Davy Pootjes: Yeah I knew I was faster and I could still win – and I did.

MX Vice: You have had a good start to the season, is this what you expected coming into the year?

Davy Pootjes: Yeah but it is going even better than I thought. It is going really good.

MX Vice: Did you do much over the winter?

Davy Pootjes: Yeah I trained a lot with Harry Everts. This winter I learnt a lot and it is going much better this season compared to last year. I was working a little bit with Harry last year but now I am working with him every week and it is coming together.

MX Vice: You  have had a rivalry with Brian Hsu but this season you have elevasted yourself to a level above him, what do you put that down to?

Davy Pootjes: I don’t  know, I think this year I am a little bit stronger and a little bit bigger. I have passed him almost every moto now when we battle and I won every battle, so that is good. This year I am stronger (than him).

MX Vice: Going into next season are you going to do any EMX2  or any MX2 races?

Davy Pootjes: We don’t know yet, soon I am going to test the 250 and then maybe we will do some EMX2 races.

MX Vice:  Further down the line are you looking to be World Champion and stay in GPs or go to America?

Davy Pootjes: First I want to be World champion and then we will see if I go to America. I haven’t ridden supercross a lot, it is not my best thing and I prefer outdoors.