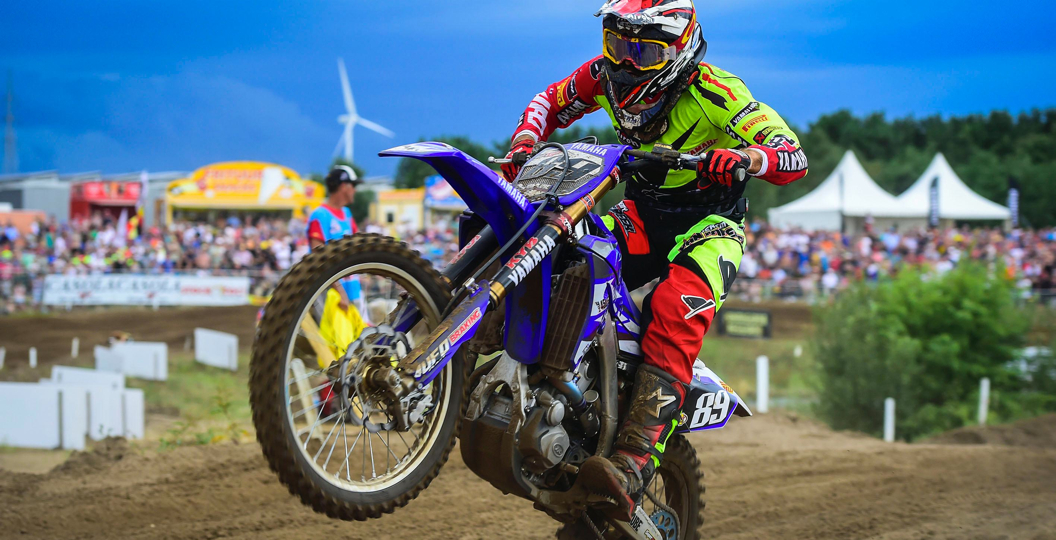 Problems for Van Horebeek in Belgium

One week after his milestone victory at the Grand Prix of Czech Republic Yamaha Factory Racing’s Jeremy Van Horebeek battled through some tough circumstances to capture eighth position at Lommel, Belgium today for his home round of the FIM Motocross World Championship.

The fifteenth meeting of seventeen was played out on the treacherous sand of Lommel and in some difficult conditions with high temperatures and humidity covering the weekend and a torrential rainstorm flooding the closing stages of the second MXGP moto.

Van Horebeek made a steady start to the first moto by gliding his way into the top five and then pushing to gain third. The Belgian then concentrated on his lines until threatened by Shaun Simpson. While attempting to retaliate he landed heavily from the quad jump and the impact of hitting the bars caused his goggles to cut his left eye and knocked his head. ‘Jere’ continued until the end of the race but slowed to make the finish and eventually reached the flag with seventh position.

Despite the adversity Van Horebeek sought treatment and recuperated in the break and turned out again for the start of the second moto. ‘Damage limitation’ and a steady approach yielded decent points with ninth place and ‘89’ moved closer to confirming his position as runner-up in the 2014 MXGP championship thanks to a 90 point lead over Kevin Strijbos and a maximum of 100 left to win this season.

Bike it Yamaha Cosworth’s Rui Gonçalves was competing around a circuit that he knows like the back of his hand. The Portuguese managed tenth position in the qualification heat on Saturday and circulated just inside the top twenty to score fifteenth in the first moto. A problem with a back muscle meant he could not reach his usual level of performance, although he did ride to eleventh place in the second moto for eleventh overall.

DP19 Yamaha Racing’s David Philippaerts completed some laps on Saturday despite a broken bone in his left foot. The Italian wanted to evaluate his condition and see if it was possible to score some points on his YZ450F but decided that the bumps and hard landings from some of the jumps were just too much for his injury, sustained just seven days previously in the Czech Republic. The 2008 world champion was running a special livery in dedication to late former mentor and champion Georges Jobe. DP sat out the races on Sunday but expects to be back to fitness in two weeks and ready for the remainder of the season.

Yamaha’s Grand Prix collective can breathe easy over the next few weeks with a sizeable break in the schedule. Race action will not start again until the first weekend of September with the State of Goias event (Brazil) directly followed by the second ever Grand Prix of Mexico at Leon.

Jeremy Van Horebeek: “It doesn’t matter. Maybe I made a rookie mistake. I felt good in the first moto and my pace was pretty good. I thought second place was possible but then Simpson and Paulin started to jump the quad and I looked at it and believed it was quite easy, so I went for it also. Yeah…it was further than I thought! I cased it quite badly and smashed my face on the handlebar. My eye was bleeding a lot and I wasn’t feeling so well. I wasn’t sure about the second moto but we are racers, not football players so I went for it. I had an awesome start but I started bleeding again and it was running into the goggles so I had to dump them, it was ‘game over’ then. A shame but I’m having an awesome season and we are close to second in the championship.”

David Philippaerts: “I knew it would be very hard for me here but this was an important GP for me and the team so I wanted to try at least. The big holes and the landings from some of the jumps were hard for me to deal with and I know I would have to take too many risks for maybe just one or two points. It was senseless to risk another crash. I should be in good shape after a couple of weeks and ready to go for Brazil and Mexico.”

Rui Gonçalves: “I’m a bit disappointed because I was looking for better results. Today I don’t know what happened with my back but on the first lap of the first moto I pulled a muscle or something and it was just locked. I could stand up or sit down properly and was struggling. I worked with the physio between motos and it helped but it was not how it should be. We worked hard this weekend and it a shame I couldn’t do better. We just have to look forward now to the last two rounds for good points there. My first priority is to fix my back and will check with my doctor tomorrow. Thanks to the team and the mechanics for all they have done.”