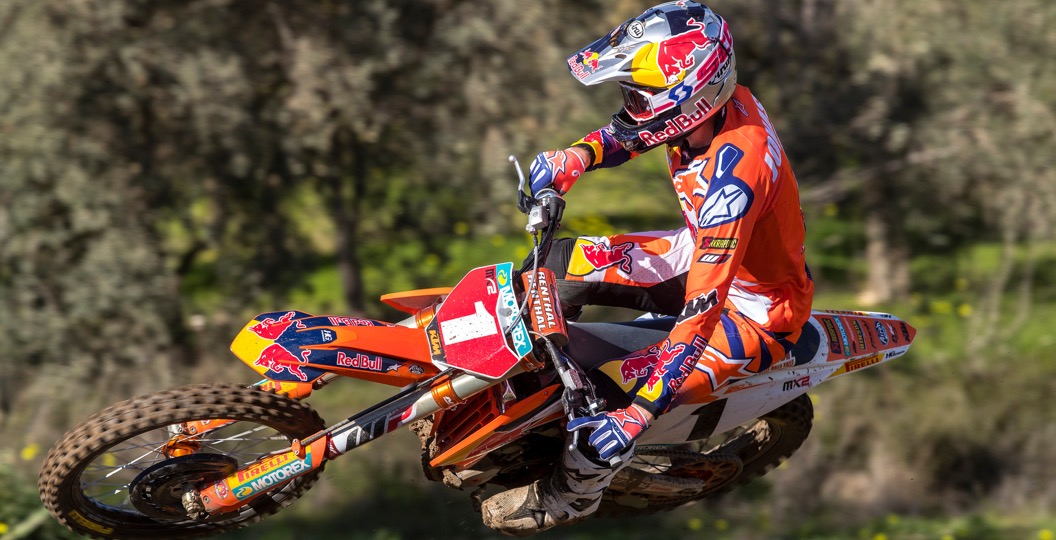 The off-season may be a tedious exercise, but the ability to make predictions and discuss what lies ahead helps with that. Seeing as the FIM Motocross World Championship is less than two days away now, which is extremely exciting, a few of the staff members at MX Vice have been given a platform to voice their opinions.

Hunter Lawrence, Jorge Prado and Thomas Covington all have realistic shots at this title. It is not much of a stretch to say that nor would it be a shock to see either of those three with a gold plate at the end of the season, as they are going to be really good. Will Pauls Jonass be even better though? I challenge anyone to find a reason why he should not be considered the outright favourite for this title heading into the Grand Prix of Patagonia-Argentina. The data that we have right now suggests that he’ll get another championship, but that could all change by Sunday evening.

Pauls Jonass is an easy pick again, as he swept this Grand Prix last year, but Jorge Prado was also exceptional. I would happily select Prado as the winner, but the fact that he has not raced at all this year may cost him slightly. You have to presume that there are some cobwebs that need blowing off, right? I struggle to see Hunter Lawrence winning this particular race, just because the Red Bull KTM duo were so great here last year, but it is worth noting that a sickness restricted him somewhat at the Argentine Grand Prix twelve months ago.

I am all-in on Darian Sanayei. It seems as though he got lost in the pre-season discussions, despite the fact that he showed some potential last season. Those bursts of speed were not present at every race, admittedly, but that will come. The fact that he just possesses the ability to turn it on, like he did in Argentina last year, is encouraging enough. It is just a matter of time before he lands on the podium and, hey, I think he wins a Grand Prix this season. Neuquen, Matterley Basin and Frauenfeld-Gachnang are tracks that he is particularly good at.

With Suzuki departing and Jeremy Seewer taking the step up to the MXGP class along, with the likes of Benoit Paturel, the class is in need of a new superstar. Could Hunter Lawrence be that rider? He’ll feature on numerous podiums – that is for sure – but KTM’s domination will take some beating as both Pauls Jonass and Jorge Prado look to gain further momentum.

KTM featured on every podium leading up to the final round in Villars sous Ecot last year, where poor weather wreaked havoc on the results. Across all nineteen rounds they secured fourteen-seven percent of podium spots. That level of domination is unlikely to continue this season, with the departure of Julien Lieber and Calvin Vlaanderen from the Orange Brigade, but I still see Jonass and Prado mounting the biggest challenge for the title. Ultimately I think that the likeable Latvia will take his second world championship, followed by Prado and Lawrence.

I expect a few surprises throughout the weekend in Argentina, as riders and teams finally get to see just how good their pre-season training really was. But, when all is said and done, I expect the KTM riders to feature heavily on the podium and with Prado on the top step. Thomas Kjer-Olsen rode well here last year, finishing second in time practice and sixth overall, and following his impressive Hawkstone International performance I can see him battling for a race win if he gets a good start. For that reason, he takes a step on the podium alongside Jonass.

This is arguably one of the most promising years for young British talent in MX2. I’m going to give an honourable mention to Conrad Mewse here, who I think will fare well back on the KTM and with a British team. However, my wildcard choice is Ben Watson. I feel like we have been waiting for the break-out year from Watson for years now and last year was impressive, given his recent history of injuries, but at twenty-years-old he is still young and with Kemea Yamaha he has a bike to challenge the best in the class. Watson has the talent to carry top five speed and that will translate into podiums.

Going into 2018, we have the reigning champion looking to take his second title. Can he do that? I am not so sure. We have got some (hopefully) extremely exciting racing ahead of us this year and I expect him to have hot competition from two riders, his teammate, Jorge Prado, and the likeable Hunter Lawrence.

Prado has not yet developed into a title winner in my eyes, but the Aussie has all the credentials. Lawrence had an incredibly impressive end to the 2017 season, coupled with a class-winning performance at the MXoN. The new-and-improved CRF250R is a good base machine and, although the team does not exactly have a lot of history behind it, they have got a good level of support. I expect him to start the season well and take the title, albeit with a mighty fight with Prado and Jonass.

Pre-season testing is one thing… The first race of the season is an entirely different ball game. Looking at the races we have had so far, and the race winner here last year, it is hard to predict anyone other than Jonass taking the win. He took both moto victories in 2017 and, although I have taken a bit of a wild pick in Lawrence for the title, I expect the Latvian to take the victory. A combination of his confidence coming in, being on the same motorcycle as the last couple of years and having taken wins at the track last year will help him reach the top step.

Conrad Mewse, but let me explain. Mewse spend the majority of his younger days being “the kid.” When you have a solid bike, a good team and significant expectations on your shoulders, it can be extremely challenging to deal with the pressure. We saw flashes last year and, as much as it is going to be tough, I am expecting some real flashes of brilliance. There is very little pressure, he has a reasonable amount of experience and some real hunger to come out and show us all what he is made of.