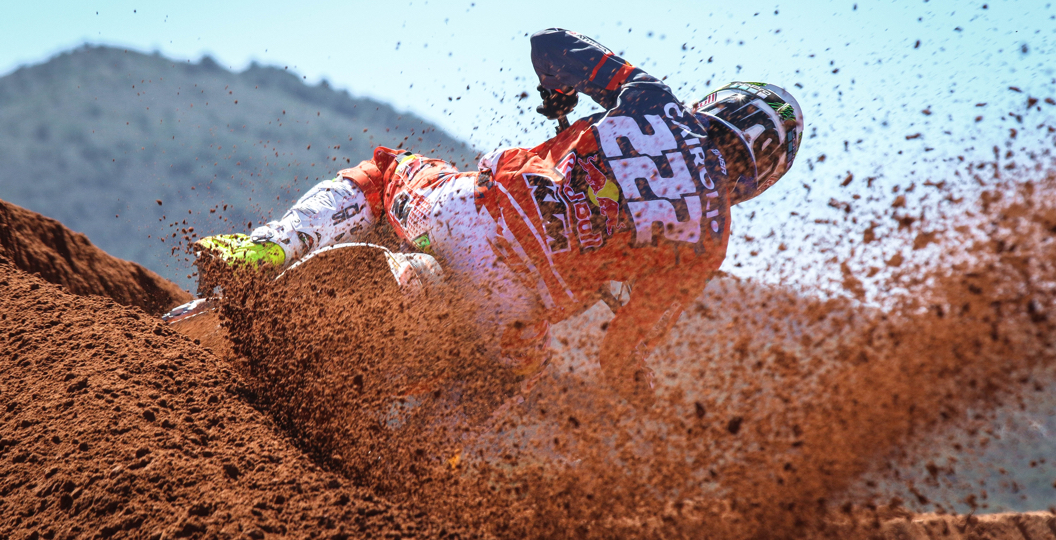 RedSand provided riders with plenty of opportunities to show off earlier today, much to the delight of the thousands in attendance, as the substantial jumps are perfect for glamorous whips and scrubs. There were some noteworthy results that emerged from the practice sessions too, although they did not exactly stray from what is considered normal.

Jeffrey Herlings was the quickest in free practice for the third round in a row, but his margin was nowhere near as big as it has been. Although some will consider that shocking, it was really not. The track was fast and actually not that rough at that point in the day, so it seemed as though it would be difficult for a rider to really separate themselves from the rest of the field. Does that mean that Herlings will not be able to charge through the field in a race, like he has done at the previous two rounds? That remains to be seen at this stage. It is worth noting that he went a second faster than the rest in timed practice though, when the track was a little rougher, but a good start is certainly more important than it has been.

Jeffrey Herlings set his best lap right at the very end of the free practice session, whereas most other riders logged a fast time around the halfway mark, and then did the same in time practice. Herlings is actually on an impressive streak currently, as he has been on top in free practice at the last eleven MXGP events. The last time that he failed to land on the top spot in the first session was at the Grand Prix of Lombardia in June last year when Antonio Cairoli, who typically acts uninterested during the initial practice, got ahead of him. Cairoli was jostling for the top spot again earlier today.

There were a lot of suspension changes made during the free practice sessions, particularly by the MX2 riders. The ground is so deceiving and actually becoming harder than most initially presumed, in some spots at least, so changes were made in an attempt to combat that. Those appeared to be straightened out by the time that the second session rolled around though, as a majority of the guys just hammered out consistent laps. Speaking of that class, how about Darian Sanayei? Are we about to see a first-time winner in MX2?

Darian Sanayei set a blistering time in free practice, which was more than a second and a half quicker than anybody else. The fact that he backed that up in time practice has led most to believe that there is about to be an upset. The time that he set in the second session was just as impressive, but it could have been so much better. Sanayei started to go on another tear and set a personal best in sector one, despite the track being at its roughest, before recording a session best in sector two. A mistake in sector three ruined it, so he did not improve on his time in the end, but he clearly has more in the tank. This could be very interesting.

There were a lot of penalties to take note of in the MX2 class. Henry Jacobi and Nicola Bertuzzi had their quickest times taken away in free practice, because they stopped on the track, and then Brent Van Doninck and David Herbreteau were handed the same penalties in the timed session. Stefan Ekerold, an MXGP rider, lost his times in both free and timed sessions too. The officials are clearly hot on that particular topic today, as a handful of EMX riders also suffered.