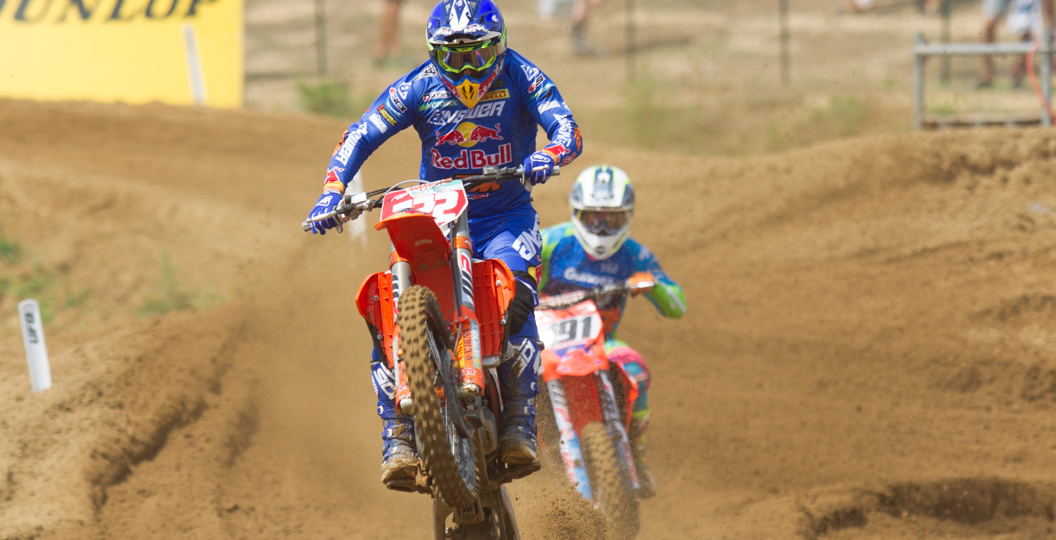 Glorious sunshine has created an ideal environment for the thousands of Italian fans who have travelled to the Grand Prix of Lombardia, which is being held at the Ottobiano facility for the first time. That intense heat is taking its toll on the hundreds of riders in attendance, however, and creating some intriguing results.

It seems that there are simply two protagonists in the premier division. Antonio Cairoli and Jeffrey Herlings have sat atop the time sheets in both sessions, so betting on a different rider could be labelled as rather foolish. Cairoli has been superior each time, but the timed session in particular was most impressive. A second and a half was his margin over the rest of the field at one point. It ended as eight tenths, which was still the second-largest advantage that a rider has had in time practice this season. Tim Gajser was more than a second quicker at the Grand Prix of Leon.

Good starts seem to be crucial on this circuit, so that should decide who will come out on top. Would you bet against Antonio Cairoli in that category? One of the most intriguing answers that we should receive this weekend is whether or not the problems that Herlings has out of the gate have been cured. There was certainly a considerable improvement at the Russian fixture.

It is honestly difficult to make predictions based on practice, as different strategies were adopted by each rider. Cairoli, for instance, only completed four laps in each session. Herlings did thirteen overall, Gautier Paulin did fourteen and Arnaud Tonus logged eleven. Max Anstie and Max Nagl, on the other hand, only did a single fast lap in time practice!

That worked well for Max Anstie, who seems to be well on his way to a maiden MXGP podium. ‘99’ has been extremely competitive in recent weeks and hovered around the top three in both sessions again today. Good starts would help his cause tremendously, but it seems that he could carve his way into the top five no matter the circumstances.

Very few storylines jumped off the page in the premier class, but some intriguing titbits emerged in the MX2 division. Jorge Prado, who limped to a twelfth in time practice, is dealing with a painful arm after a crash. This is typically a track that he would thrive on, but it seems most unlikely that he will contend this weekend. Petar Petrov crashed out of free practice also and was favouring his left arm. ‘152’ is still walking around the facility, but will not be competing at the Grand Prix of Lombardia.

One could have labelled the time that Jeremy Seewer set in the first practice session as a huge statement. Pauls Jonass tends to be a stronger rider in the sand – Valkenswaard acts as proof of that – so it was most impressive to see Seewer go more than a second faster. Normality was restored in the second session, however, as Jonass topped the times by a considerable margin and is once again the man to beat.

A final note to consider before we sign off: Anton Gole is now piloting a TM Factory Racing machine. His results in the coming weeks may drop off, as he slices through an adjustment period, but it is great to see the Swede receive support. ‘297’ has been one of the most underrated riders thus far this season.