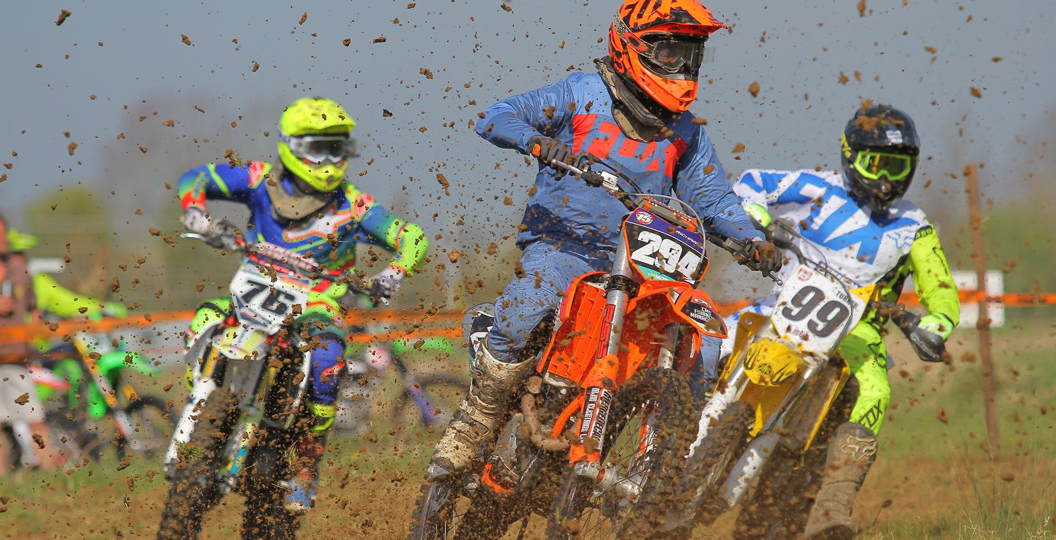 Portsmouth MX Club were blessed with brilliant sunshine and blazing hot temperatures for the fourth round of their summer series, held at the renowned Rocket World circuit. A well-prepped track ensured dust was kept to a minimum and set the tone for some outstanding battles.

First out were the MX1 boys, with Jake Penny taking control of the opening race. Penny found himself being persistently hunted down by moto-two winner, Craig Daffin. The pair fought it out all day, but Daffin’s spill in race three denied him the overall. Penny secured first overall with Daffin in second. After chasing the leaders down in the opening motos, Dan Lawler took the bit between his teeth and romped home to an amazing victory in the final race and rounded off the MX1 podium.

TP Fox Holeshot rider, Tobias Sammut, was on fire out of the gate in the Big Wheel 85 class. However, he was denied a top overall spot after trailing in at the back in the second moto. Despite Sammut’s efforts he, like everyone else, could not deny Ollie Cole the overall. Cole found himself under pressure in every moto, as Thomas Casbeard and Vinnie Guthrie were on his case. Guthrie unfortunately sustained a puncture, forcing him to miss out on a top spot.

Casbeard meant business and chased Cole in each moto, even though he slipped back in the final race he still secured second. Robert Storer kept the leaders in his sight and was super quick each lap to finish in the top six each moto. Going 4-4-6, he ended the day in third overall.

A bumper crop of Small Wheel 85 riders crammed the gate, providing some jaw-dropping action. Alfie Calvert looked certain for a straight set of wins. Blistering speed rewarded him with the win in motos one and two, but a mediocre start that forced him to work his way up from mid-pack in the final moto denied him a clean sweep. However, tremendous riding saw him secure a third and take the overall.

Charlie Nightingale was desperate to get to the front of the pack, sliding across the holeshot line. He worked hard to improve his results throughout the day, holding off his rivals, saving his best performance until last to secure a race win, whilst claiming second overall. James O’Mara kept in the thick of it at the front, keeping his cool in the heat to go 2-3-2, finishing third overall.

There was some brilliant racing by the Junior class; Luke Richardson and Charlie Richmond went head-to-head for the win, but a nasty crash in the final moto forced Richardson to see the medics rather than the finish line! Following his triumph the previous weekend, Charlie Richmond grabbed himself another win in the second moto and then two seconds to claim another overall.

After sitting out for months last year due to a knee injury, Ben Sullivan came back with a bang and carried on where he left off in the top three. Two thirds were topped with a spectacular final moto win to end his day on a high, gifting him second overall. Kieran Paget was also on top form, persistently working hard to improve his positions throughout the day. An outstanding third in race three rewarded his efforts, going 6-5-3 to secure the final podium place.

The pocket rockets were out next, with Tyla Thomas showing everyone how it’s done. A flawless performance at jaw-dropping speed saw him lead all three races and take the chequered flag each time. Overall victory went to Thomas. There was a scrap pursuing between a number of riders, but Jacob Collins had the upper hand and narrowly missed taking the lead in the closing race. Confident racing rewarded him with second overall. Jake Webb was on a charge to get past Collins, working super hard as always to get to the top. Going 3-5-3 saw Webb finish in third overall.

What a rider Preston Williams is! His super quick starts saw him push to the front from the off and pull out an incredible lead over his rivals. Todd Leadbitter did not make it easy for him, as he worked tirelessly all day to take the lead and did so in moto two. A heavy crash in race three, however, denied him the top spot. Williams at last had a great day on the track; no mechanical gremlins prevented him claiming the top spot with a combination of two wins and a second.

Daniel Roberts was a force to be reckoned with, super speedy and closing in on the leading duo. Roberts managed to bag a second in the final moto to take home second overall. Despite a disappointing third-race finish, Leadbitter still salvaged enough points to finish third.

VMX were next to roar up the start straight! It truly could have been anyone’s race with a mixture of riders all vying for the top spot. It was to be Howard Standfield and Darren King who set the pace, battling head-to-head in the opening motos with both Standfield and King securing moto wins in the opening races. King was determined to claim the crown once again, despite Standfield’s hard charge, and he rode to victory in race three. That gave him the overall ahead of Standfield in second place. Tony Hale looked back to his best and battled his way to the front of the pack, not putting a wheel wrong, chasing down the leaders to go 4-3-3 to humbly claim third.

Last out were MX2. Another jam-packed bunch sped out the gate, with Aaron O’Mahony heading the field. He took the lead in each race and stole the final race win, despite Luke Kennett’s efforts to catch him. Kennett did manage to take control of the opening motos; he was super-quick on his 125 to take two wins, a second and the overall win. O’Mahony fought gallantly and remained in second overall. Tallon Aspden looked great out in front of his rivals, battling hard with Scott Kennedy and Olivier Cook. Aspden managed to keep a rampaging Kennedy behind him in the final moto, grabbing third place to take third overall.