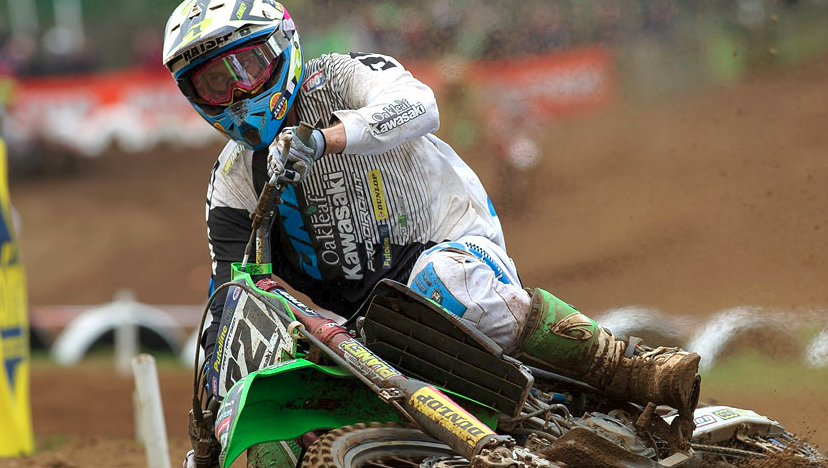 Oakleaf Kawasaki on the up at Maxxis round two

For Oakleaf Kawasaki, Lyng in Norfolk is on the completely opposite side of the country, yet it was to Norfolk that the team travelled for the second round of the Maxxis British Motocross Championship. Although some rain passed through on Sunday, the track rutted up and was as rough as ever, leading to some interesting battles.

For the team’s riders, the qualifying session did not quite end as expected. Although Shane Carless felt he had the speed to be in the top ten, he qualified twenty-first. Priit Rätsep also did not quite fare as well as he’d hoped, ending a disappointing seventeenth. Both riders found themselves picking up the pieces of the qualifying session in the first race, but things soon picked up for the latter two.

Carless ended the race after only three laps after crashing and twisting his weak knee. After seeking medical attention, he returned to the starting line in time for race two. Once back on the track, he soon settled into a good rhythm in twelfth. The third race didn’t quite start as well, but Carless again put in a great effort and made some progress late in the race to end thirteenth for a sixteenth place overall.

Rätsep had to start at the back of his first race after crashing out in the first few laps, before recovering to seventeenth at the chequered flag. Race two was an incredible turnaround that showcased Rätsep’s talent and speed. After a stunning start in sixth, Rätsep soon found himself up front with the leaders, in fourth. The final race ended with him in eighth despite a small crash that cost him several positions, and Rätsep finished the weekend in ninth overall.

We got a lot of changes from the last round suspension-wise and gearing-wise, and we’ve made good improvements. Went out in qualifying and felt good, put a couple of fast laps in and thought I was in the top ten but I managed to get twenty-first, which disappointed me, but at least I’m happy with my riding. In the first race I had a crash and hurt my knee which I’d hurt in the pre-season training, but I just took some painkillers and went out for the last two races. Had some pretty good starts, in the second I had a twelfth and in the last one, which I thought I’d rode the best all day, I managed to get thirteenth. I finished sixteenth but I am happy with my riding.

The weekend’s been up and down again, actually. Starting from qualifying, I made some mistakes myself and had some bad luck, and couldn’t do a good lap. I had to pick a gate in seventeenth, and I was really mad about that. In the first race I got quite an ok start, we decided to run a scoop, I didn’t think it through, and I went down. I had a second crash with another rider as well, who went down in front of me. So the first race was bad, and I finished seventeenth. Second race got off to a really good start and I was riding the whole race in fourth. I had the speed, the end of the race was hard, but it was hard on everyone because the track was really rough. The third race I finished in eighth, so I’m happy about that as well, because that was a really hard race. Overall I’m pretty happy with the weekend. I want to say thank you to Oakleaf Kawasaki, they do a really good job and have been supportive from the beginning of the season because I needed to get used to British racing again, and it’s going uphill now.

The day started off with bad qualification and we came back in and regrouped as a team and spoke a few things and we then went out with the anticipation of believing in each other. Shane jarred his knee again in the first race, he came back in and thought he’d niggled the old injury pretty bad, but once he got back in we had a word with the ambulance staff, and he chose to go back out and it obviously was a big decision to make. It paid off because Shane’s had the best ride of the year so far today and he looked good on the bike. Priit’s been struggling with arm pump and today in the second and third race he said that he felt good before he went to the gate and he wasn’t putting himself under too much pressure and it paid off because the arm pump wasn’t there and he had really good results. The atmosphere is great in the team and we just want to take that on to the next round and hopefully we’ll be back to where we were at the end of last year. It’s obviously a big challenge, but we’re confident.