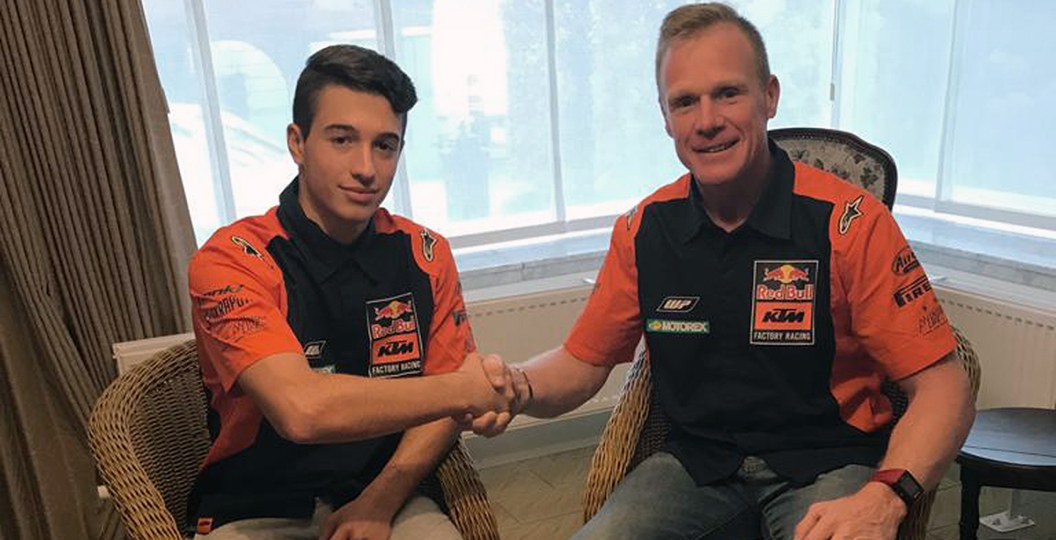 The 18-year-old will join Jorge Prado on the factory KTM 250 SX-F after catching the eye with a moto victory, five top-three race finishes and three podiums in the 2018 EMX250 European Championship. Vialle, son of former Grand Prix rider Frederic, was competing in EMX250 from the confines of his own set-up before drafted into the LRT KTM squad in the latter phase of the season.

Vialle will come under the stewardship of Motocross Manager and five times World Champion Joel Smets and MX2 Team Manager Dirk Gruebel as part of the Red Bull KTM set-up and will fill the awning next to MXGP World Champion Jeffrey Herlings for 2019.

Tests and training with Tom have already begun this month.

Tom Vialle: “I want to thank all the people who have helped make this opportunity with Red Bull KTM Factory Racing possible. It is a great to be joining the best team in the world for my first year in MX2! Being next to champions and race winners like Jeffrey Herlings, Tony Cairoli and Jorge Prado doesn’t bother me because I know it is a perfect chance to be learning from the fastest. I cannot wait to get started and to progress as much as I can.”

Joel Smets (Red Bull KTM Motocross Manager): “We keep a close watch on the EMX125 and 250 series’ and to see who might be the next outstanding talent to come through in the way Jeffrey and Jorge have in the last years. We felt that Tom was one of the brightest from that EMX250 ‘pool’ this season. We initially spent two days working together and I was convinced that this kid has potential both with his technical skills and bike handling as well as his physical possibilities to show us something special. A factory ride is just the start ‘of the journey’ but we’re excited about what we could see in 2019 with Tom as part of the team.”