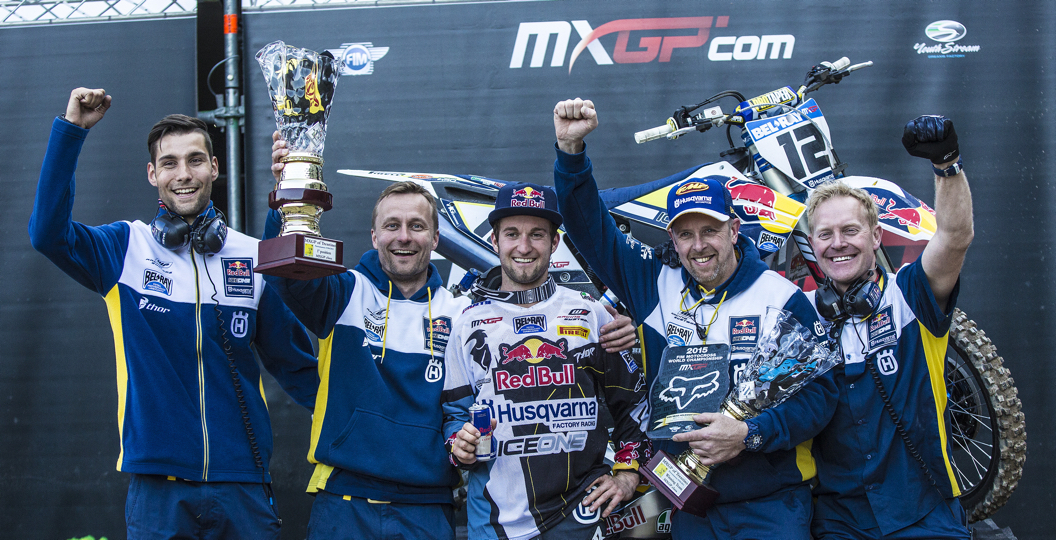 Max Nagl secures the top step of the podium at MXGP of Trentino, Italy

Claiming his third overall victory of the season, Husqvarna Motorcycles’ Max Nagl delivered the winning result at the MXGP of Trentino in Italy.

In what was one of the championship’s most exciting rounds in recent times, Red Bull IceOne Husqvarna Factory Racing’s Nagl fended off his championship rivals in the final race of the day, on one of the season’s roughest and demanding tracks, to secure victory and claim the top step of the podium.

Riding on the best form of his career, Nagl arrived to the MXGP of Trentino determined to build on his overall victory last time out in Argentina. With the hilly Italian circuit proving extremely tricky, the Husqvarna rider was involved in one of the most exciting races seen for some time in race one. Enjoying a race long battle with Antonio Cairoli, Nagl was just unable to find a way past the Italian and had to settle for second.

Knowing a good start was crucial for success, the German grabbed the holeshot in race two and never looked back. With a clear track to play on, he set the fastest lap of the race on lap one before steadily pulling clear of the chasing pack to take a comfortable nine-second margin of victory.

The race win ensured Nagl claimed his third overall victory of the 2015 MXGP season while moving up to second in the championship and just one-point behind leader Clement Desalle.

For Nagl’s teammate Todd Waters, the MXGP of Trentino was a difficult one. Finding the unforgiving terrain hard to adjust to, the Australian placed 15th in race one before improving to 11thin race two.

Wilvo Nestaan Husqvarna Factory Racing’s Dean Ferris didn’t enjoy the best of luck in Italy despite producing some strong rides. Eighteenth in race one, Ferris crashed off the start in race two but fought his way back from 31st to 17th.

For Wilvo Nestaan Husqvarna Factory Racing’s Aleksandr Tonkov bad luck prevented him from delivering the results he hoped for on his FC 250 factory racing Husqvarna. A bad start in race one left him boxed out as the pack rounded the first corner. Pushed back to about 15th, Tonkov did well to battle his way back to eighth on the predominately one-lined course.

Second fastest out of the gate for race two, Tonkov faired much better as he held a top three position for the first five laps. But an unfortunate technical issue put an end to his race and thoughts of a possible top three result.

The FIM Motocross World Championship continues with the MXGP of Europe in Valkenswaard on April 26.

Max Nagl: “It’s been a great weekend but honestly this win is the result of yet another big team effort. During Saturday we made a lot of progress with the setup and I felt much more comfortable on the track. My start was good for race one and I was second behind Antonio for the whole race. We were having a great battle – I did feel faster in places – but I didn’t want to take the risk necessary to make the pass stick. I was happy with second. When I got the holeshot in race two I decided it was my time to go. I gave it 100 per cent for the first 10 minutes and pulled a gap to win. I love riding at the minute and the team are working so hard for me – I can’t thank them enough. It was also special to have my son here watch me race for the first time. Today was perfect.”

Todd Waters: “It was a hard track to grasp. The conditions were very unforgiving and difficult to judge. In race two I got a great start – something we’ve worked hard to improve on – and it really helped. Even though I slipped back to 11th it was good to race in sixth for a few laps. I’d like to give a big thanks to my team, Antti and my mechanics Ryan and Antonio for all the hard work they’ve been putting in.”

Dean Ferris: “A crash just after the start in both races really destroyed my chances of a better weekend. The track wasn’t my favourite surface – it was really hard to judge but I was riding well on it. We’ve been testing hard since Argentina and it has showed in my riding. Despite not getting the results I want, I managed to pass a lot of riders in both races to get back to 18th and 17th each time.”

Aleksandr Tonkov: “It’s been a tough weekend but sometimes that’s how racing goes. My start wasn’t there in the first race and I found myself about 15th on lap one. The track was very one-lined so overtaking was difficult. I was pleased to fight back to eighth. Race two I was second off the start and was holding a strong top three position for five laps until my bike developed a technical issue and I was forced to stop.”