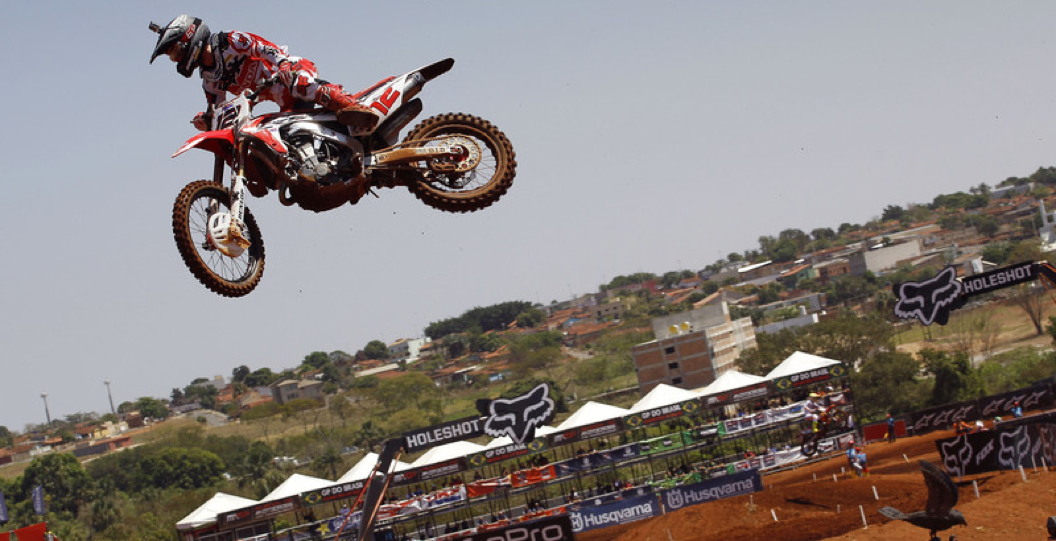 Nagl sets the pace in Brazil

Team HRC’s Max Nagl blazed a storming trail at the new State of Goias track in Brazil today, leading from the start and setting the fastest lap to take victory in the MXGP qualifying race.

At the penultimate round of 2014, Max took his third qualifying race win of the season aboard his Honda CRF450RW. His pace was as relentless as it was fast, lapping within a second of his best for half the race, and as those around him faded he stretched his dominant lead to 10.7seconds at the chequered flag.

The Goias track is new for the MXGP calendar this season, but the team have been working hard this weekend and in recent tests on setup of the CRF. As a result, the pairing of Max and the No.12 machine proved unstoppable on the hard-pack surface of Honda-red clay as the temperature reached 32 degrees Celsius.

Conditions for tomorrow’s two races are set to be the hottest of the weekend so endurance is sure to be a factor, but Team HRC have started with the strongest possible form today.

Max Nagl: “I’m really happy! Already in warm-up I was feeling really comfortable with the track. There are a lot of jumps, a nice rhythm and good ground and that’s what I like. I’m very happy to get this win especially after the second race in Lommel; it’s really good to come back like this. We have a lot of confidence for tomorrow. It’s very hot and it’ll be two hard races tomorrow so we’ll have to save some energy for the second moto, but we’re aiming to have two races like today’s.”

Roger Harvey (HRC General Manager): “Everything fell into place really well. Max was perfect from the start and from the gate was just that bit ahead. He had a bit of a challenge for the first two or three corners but he and the bike were just working beautifully as one and he took advantage of that. The bike is working really well and you can see it’s covering ground fast. Max isn’t the biggest of jumpers out there and there are other guys jumping further, so he’s obviously covering a lot of ground pretty quickly elsewhere. We’re really happy, and Honda Brazil make a big investment into this event so it’s great to put a Honda on top today.”