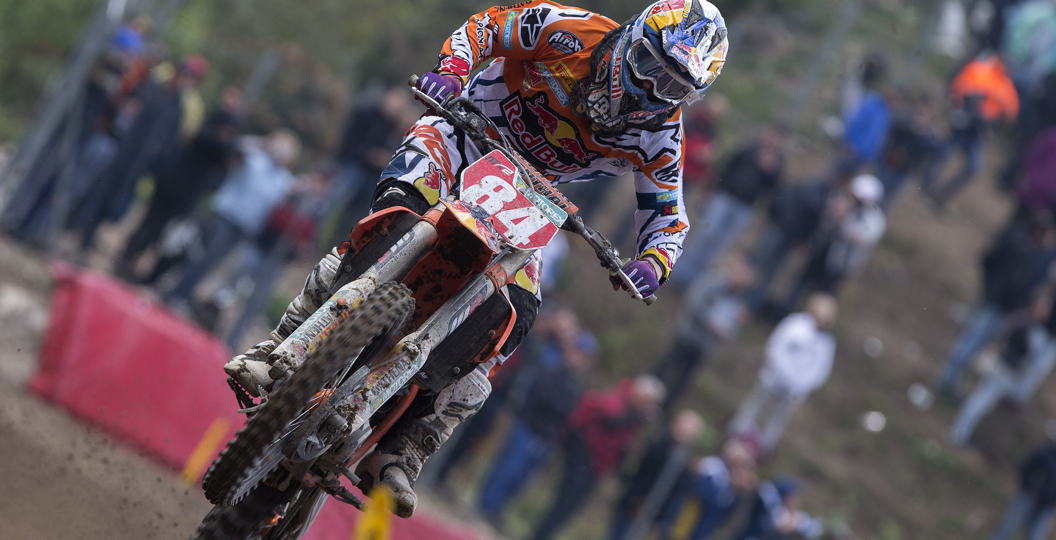 We have a new winner! For the first time in quite some time, Jeffrey Herlings was beaten straight up, which was obviously a hot topic in the post-race press conference…

Tim Gajser: “It was just great. I felt really good yesterday, and also today. We had a good qualifying race, I was second, so it was great for gate pick. In the first race I didn’t make a great start; I was ninth/eighth, something like that, and came back to second behind Jeffrey. So it was quite okay. In the second race I had a better start, I was third, and passed two riders. Then I just tried to manage the gap to Jeffrey; he was coming quick but I managed to keep him behind me.

“Three laps before the finish we hit some lap riders and they blocked some good lines, so Jeffrey closed even more. On the last lap he made a mistake though; I won so it was good. I didn’t know [that he had crashed], I was just riding and pushing hard until the end.

“This is the closest GP to Slovenia so there were many fans. It was great to hear those supporters around the track. It is a very, very good feeling. I know that I have speed and I’ve been training really hard over the last few weeks; it paid off, so I’m happy.”

Jeffrey Herlings: “When you don’t get the start and have to come from the back it’s always difficult, especially around here. In the sand there are many places to pass, but this was kind of one-lined and the track was really choppy in some places. I think Tim got up front pretty quick and I had to come from far in the back, but managed to close the gap. I was on his rear wheel and had seen his lines, so I wanted to pass him in the same place that I passed Jordi in moto one, but I went down.

“We were definitely struggling a bit in the second moto. It’s the first time we’ve ridden a track this choppy and bad on the new bike, and I could have maybe improved the suspension a bit. But we did our best and this is the first time in three years I’ve been beaten straight up. It’s been a tough weekend, but we can’t always win.

“Valkenswaard is like forty-five minutes from my house, so I’ll get some good training in this week. The most important thing is to win, the other things are important too though, but we really want wins. I’ll try and focus as much as possible on racing and do my best.”

Jordi Tixier: “After my penalty from Thailand I was very disappointed. It was very difficult to watch Argentina, but after that I needed to grow up and be stronger. The last few weeks I’ve been focused on this race and worked very hard. We’ve made some good improvements on the bike – you can see that with my two holeshots. Now I feel really good; I have nothing to lose, so I’ll just try to take points. It’s always good to be back on the box and hopefully it’ll be like this more this season.

“It’s not bad (my speed in the sand). It will be difficult to beat Jeffrey – everybody knows that. The last two years I rode really well there, so hopefully I can make a good start and be on the box again.”