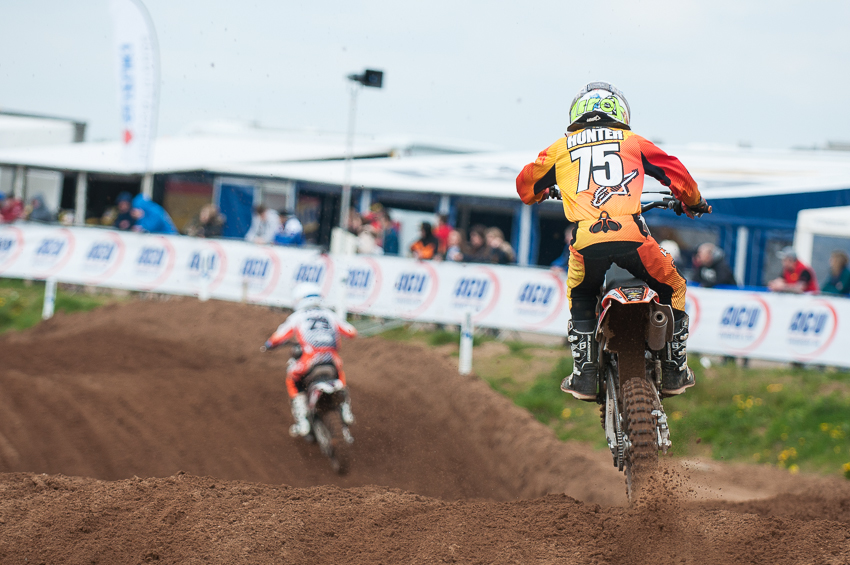 Well, the third round of the MX Nationals is nearly upon us, and it really is action all stations! The UK’s newest series is proving to be one of the most exciting, thus far.

If you do not already know, there was a big decision made over the past week. After consulting the riders, teams and spectators, there will no longer be a ‘Pro Support’ class, and there will be separate MX1 and MX2 classes, instead. So, like the British Championship, the series will now have three MX1 and MX2 races over the weekend.

So, with the classes now split, and the championship wide open, the riders have to concentrate on racing riders that are on the same size bikes as them! Nathan Watson contested a round of the Dutch ONK championship last weekend, against some very fast competition. Will this give him the edge over his competition at Whitby? Brad Anderson definitely upped his game at FatCat two weeks ago, and we expect him to be in the thick of the battle at the front of the pack this weekend.

Kristian Whatley will be looking to bounce back to winning ways – the hard-pack tracks are where he is most comfortable, which should give him the edge. Gert Krestinov (LPE Kawasaki) and Priit Ratsep (Oakleaf Kawasaki) will want to continue their recent run of good form, and so will JAR Honda’s Matt Moffat and Heads and All Threads Suzuki rider Graeme Irwin. You can also expect Tony Craig, Jamie Law, Stuart Edmonds, Luke Remmer and Shane Carless to break into the top ten, too.

Buildbase Honda will be down to one rider this weekend, as Elliott Banks-Browne will be sitting this one out, after the crash at FatCat. Nez Parker is on the sidelines again too, with a hand injury. We wish both riders a speedy recovery.

The MX2 riders have produced some of the best racing so far this year, as there are a handful of riders that have a shot at the win. The battle between Bryan Mackenzie, Neville Bradshaw, Jason Dougan and Lewis Trickett at FatCat was fantastic for the spectators, as the lead was changing hands each lap. Now that they have their own race away from the MX1 riders, we expect the racing to be even better!

Steven Lenoir will be making a return to action this weekend, following an arm injury that he sustained at the beginning of April. With Adam Sterry and Ben Watson returning from European duty, the race for the win will be wide open. You cannot rule out Lewis Tombs and James Dunn; they should make an impression on the top five. Josh Waterman, Jordan Booker, Liam Garland and Rob Davidson will all be looking to garner a good amount of points over the weekend, too.

The 2-Stroke class produced some of the most entertaining racing at FatCat, and we’re hoping for a repeat of the fast and friendly action at Whitby. Ty Kellett, Damon Strydom, Seb Osbourne, James Lassu and the returning Lewis Gregory will all be in the thick of it this weekend. Luke Kennett, Jordan Moyle, Lee Foyle, Jack Waterman and Matt Allen will be looking to get a good points haul, too. Warren Field, who had a huge crash in the last race at round two, will miss the trip to Whitby, unfortunately.

In the Clubman class, there has been some good racing so far, and it is only going to get better. Chase Neale is moving up to the pro class this weekend, so Danny Townsend will be looking to increase his series lead. After having his bikes stolen a few days before round two, Tony Cadman will be looking to maintain the gap between himself and Craig Marsden. Daniel Jones, Stacey Fisher, Ashley Watt, Thomas White, Ryan Seddon, Jack Jones, Guy Langmead, Paul Gaylard, Brittany Cuthbert, Jason Beard and Rikki English will all be battling it out for a spot inside of the top ten.

Liam Knight currently has a thirteen-point lead over Josh Gilbert in the MXY2 championship. Both riders have been very consistent in the first two rounds, along with Mitchell Lewis in third. Callum Whaling, Jay Hague, Ben James, John Waghorne, Jake Sheridan, Oliver Osmaston and Joe Jefferies will be looking to break into this group this weekend, and add to their series points.

The Under 15 group has produced some great racing so far; the small wheel riders have had no problem mixing it up with the big wheel guys! Alexander Brown is currently leading the way in a very close Big Wheel group. Dylan Woodcock, Brett Pocock, Marcus Phelps, Keenan Hird, Dexter Douglas, Jed Etchells, Lee Perfect Dee Jay Walker, Jack Bintcliffe, Joe Cadwaller and Callum Crossland are all battling it out behind him, at the moment.

Lewis Hall, Kacey Hird and Ben Clark are leading the way in the Small Wheel championship. One thing is for sure, the racing at Whitby is going to very close once more, with the championship still wide open in both classes.

So, get yourself down to Whitby this weekend, as the brilliant track will undoubtedly prompt some great racing from all classes! With even more pro racing, round three is not to be missed.