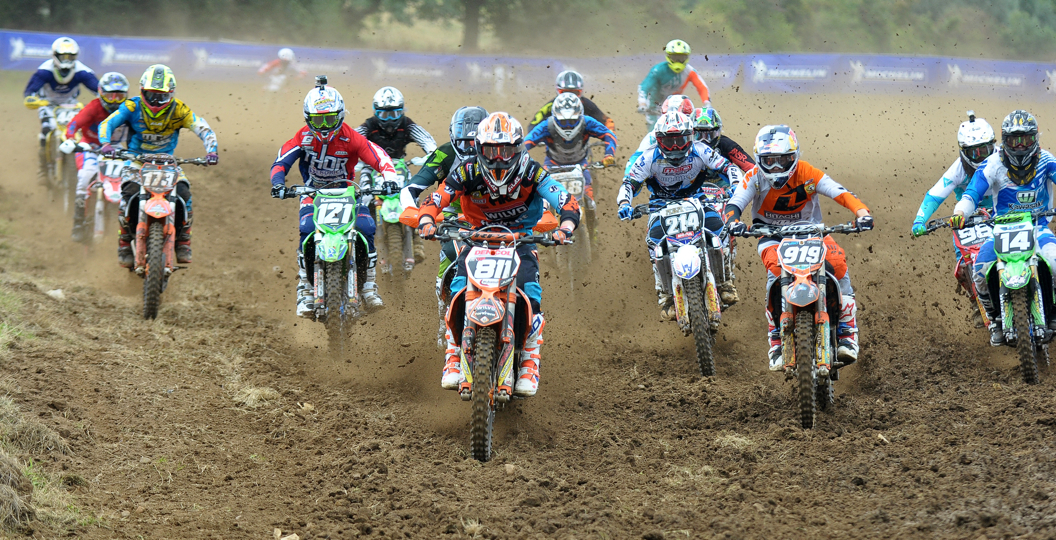 The MX Nationals will head to the sandy circuit of Preston Docks this weekend, for the penultimate round of the inaugural series. You can expect some fast and furious racing over the two days, as each class is wide open!

The MX1 class was action-packed at Culham, the most recent round, as both Nathan Watson (the current series leader) and Kristian Whatley went head to head yet again. Nathan has a thirty-four-point lead in the series standings with two rounds remaining, but as we know, anything can happen in motocross! There are plenty of riders that can split the pair up and aid either rider in the title chase, such as the Buildbase Honda duo of Elliott Banks-Browne and Brad Anderson, Gert Krestinov and the returning Graeme Irwin. With Irwin back in action, the full Irish Motocross des Nations squad will be on-track!

Neville Bradshaw and Bryan Mackenzie will continue their titanic battle for the MX2 title; just eight measly points separate the two rivals that have been battling it out for years. Bryan has momentum on his side following a victory at Culham, and he could potentially make up more ground in the standings if riders like Ben Watson, Steven Lenoir and Adam Sterry can get in-between him and Bradshaw. Any of those riders could top the podium this weekend! Both Lewis Trickett and Lewis Tombs will be hoping to impress too, following some strong rides last time out.

It isn’t just the pro riders that will be taking to the track this weekend, of course, as there are a handful of other classes featuring many different riders. The Under 16 class has quickly become a fan favourite, as the racing has been extremely exciting with multiple victors. Dylan Woodcock currently leads the series, but his lead shrunk at Culham following a mechanical failure. Marcus Phelps, Brett Pocock, Dee-Jay Walker and Alexander Brown have been chasing him all year, and we expect the battles to rage on at Preston Docks. Dylan was hoping to lock up the title at this round, as he will be missing the finale to participate in the Monster Energy Cup. However, he’ll need a bit of luck on his side to do that!

The Bell helmets MXY2 class opened up quite a lot at Culham, as series leader Josh Gilbert crashed in the final moto and could only salvage two points. Consequently the gap between him and Liam Knight, the rider that was victorious at Culham, is down to just nine points. Mitchell Lewis is a little further back, but is capable of topping the podium this weekend. Jay Hague and Ollie Osmaston should be right in the thick of that battle too, as will Conrad Mewse, who will be a wildcard this weekend! That will certainly shake things up – this class will be thoroughly entertaining.

Damon Strydom continues to lead the Maxima Racing Open 2-Stroke class, and he should be in a position to clinch the title this weekend, as he has a very comfortable lead over Jordan Moyle. Tommy Alba and Ty Kellett joined Strydom on the overall podium at Culham and had some fantastic battles at the head of the field; we’re expecting much of the same from these riders at Preston Docks.

The very popular RFX Clubman class has played host to many different riders thus far this year, but Danny Townsend has remained consistent at every round and currently leads the championship – he too could lock up that title at Preston Docks. Tony Cadman sits a strong second in the standings, and will be looking to further cement his spot over the two days this weekend. We could see another new winner in this class, as many local riders appear at each round desperate to beat the regulars.

With six classes ready to take to the track over Saturday and Sunday, there will be no shortage of action. The MX Nationals is the only place that you can see the current pros and the future stars of British motocross at the same place! If you are travelling to the track this weekend, the postcode is PR2 2HW. It costs just £10 for adults to get in for the full weekend, and children are free! Practice starts at 9am on the Saturday.