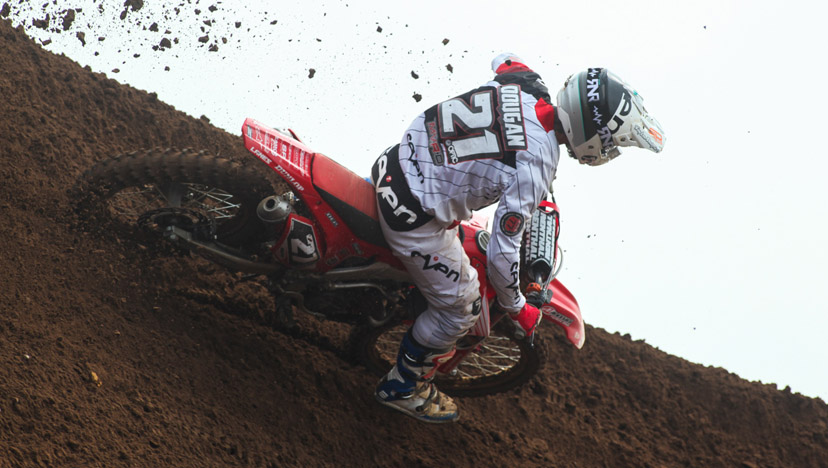 MVR-D Honda made the trip from the south coast to Yorkshire for the second round of the MX Nationals this past weekend. With team rider Jason Dougan having worked hard to recover strength after several crashes in recent weeks, the round was considered to be a moment to take stock before the third round of the Maxxis British Motocross Championship a week later.

Dougan started off well on Saturday. Practice was smooth and during his qualifying session, he put in the eighth-fastest time of his group, putting him inside the top fifteen on the start gate.

The first race of the weekend, on Saturday afternoon, blew away any doubt about Dougan’s condition. A great start put him second in the class behind Bryan Mackenzie, and after stalking him for the entire race, Dougan saw his chance in the last corner. With feet to go to the finish line, he passed Mackenzie to take the win.

Sunday morning brought with it a re-groomed track and icy winds, but the action in the second race would be hot, fast and furious. After another great start, Dougan found himself in third behind rivals Bradshaw and Trickett. He then launched a fast assault in the latter half of the race, only to have to relinquish his position to end fourth. The final race ended in fifth; although Dougan raced consistently, he was forced to relinquish a spot in the last few corners. The results tallied up to a third overall on the weekend, delighting the team.

It’s not bad. I just came here to use this as practice really, because I’ve had a couple of bad weeks, I struggled a bit at Lyng, and I’ve been working hard since then trying to put myself back on form. I was quite surprised on Saturday to win the race at the last corner on the new bike, which was nice, Sunday I rode good, mixing with Nev, had good battles and was happy with my speed. I struggled a bit towards the end of my races which got really rough, because I have a problem with my back in the sand. I definitely made progress, which is what I came here for and I’m looking forward to Foxhill now.

It’s a massive positive step in a lot of ways. Jason’s on the pace, which he hasn’t been, we’ve worked real hard since Lyng, practising different intensities of training, and his hard work has paid off. I’m pleased for him. A win on Saturday and an overall podium is more than we anticipated at this stage with the little amount of time in which we changed stuff around, so I’m really happy