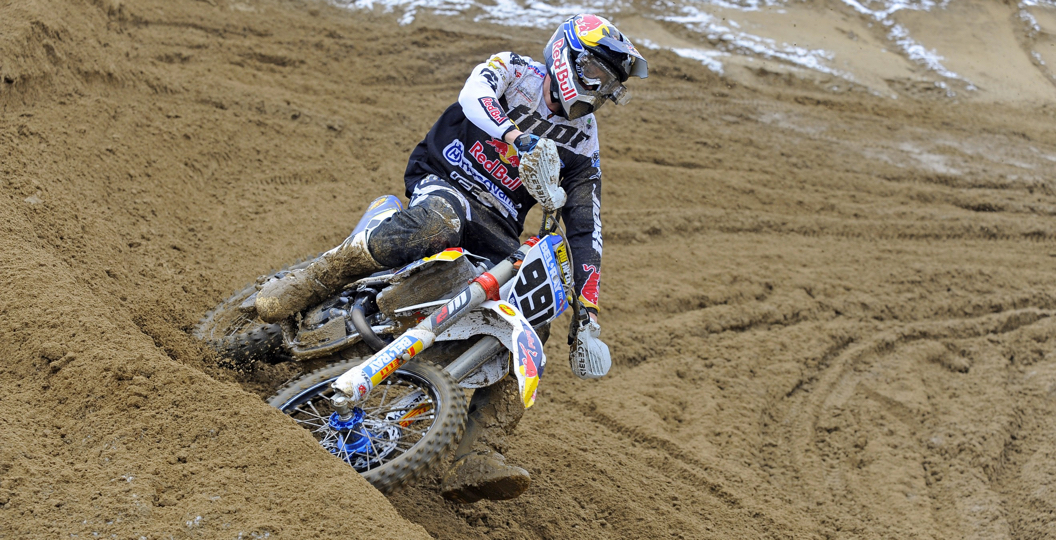 Entering the final round of the Internazionali D’Italia Sidi Series as leader of the MX1 championship, Max Nagl saw his hopes of securing the title evaporate halfway down the start straight. A bizarre crash with Evgeny Bobryshev resulted in both riders’ bikes becoming tangled together.

Needing to remove the rear wheel of his Husqvarna to prise them apart, Nagl was unable to take any further part in the race. Starting the Elite race on his spare bike from the outside gate, Nagl did well to end lap one in eighth before improving his final position to fifth.

Signing off on a productive Italian series, Todd Waters secured top ten results in both the MX1 and Elite races. Carding a seventh place result in MX1, the Husqvarna rider recovered solidly from a crash on the opening lap of the Elite race to work his way forward from 26th to ninth.

Continuing to gain valuable international experience ahead of the MXGP of Qatar, Nathan Watson put in a great ride in the MX1 race to take eighth before ending the Elite race in 11th.

Competing in the MX2 class, Aleksandr Tonkov faired best. Sixth in race one following two crashes, the Russian took the holeshot in race two. Slipping back to second during the opening lap, he held that position for the remainder of the race to end his day fourth overall.

Falling foul to the conditions despite numerous times featuring at the sharp end of the MX1 class results, Dean Ferris endured a difficult day. Multiple crashes in both races prevented him from showing his true potential in the mud.

Max Nagl: “What can I say! What happened in the MX1 race is probably the strangest and craziest thing I’ve ever scene. I tangled with Evgeny on the start straight and somehow our bikes became welded together. I was perfectly ok but my bike wasn’t. It took four people to eventually prise them apart – they even had to remove the rear wheel. On one hand it was disappointing as I could have won the title but on a positive note it happened here and not at the first round of the MXGP’s in Qatar. With no track time and needing to ride my spare bike for the Elite race it took sometime to feel comfortable. But I rode well in the second half to finish fifth. Overall I’ve enjoyed the three rounds of this championship – it’s been very beneficial and I’m going to Qatar in confident spirits.”

Todd Waters: “It’s been an interesting day but enjoyable one. MX1 went well and I placed seventh but I wanted more from the Elite race. On lap one I was about fifth and crashed after the finish line. It dropped me to 26th but I dug deep and fought back to ninth. It felt good to pass so many guys even if I messed up getting a better result. After such a long lay off due to injury it’s been great to knock the race rust off prior to Qatar. We’ve worked on a lot of things and definitely feel like we’re further ahead and more race sharp than if we hadn’t been here racing this series.”

Nathan Watson: “I had some drama this morning when my knee braces went missing. I managed to borrow a set for practice but they didn’t fit and I could hardly ride my bike. I borrowed another set for the races and felt like my old self. Cracking the top ten with eighth in MX1 was fantastic. It’s been great to gain valuable experience on three very different tracks in this series. My confidence is growing with each race and even though I still feel like I’ve yet to show my full potential I’m excited to go to Qatar and give it my best shot.”

Aleksandr Tonkov: “That was some of the worst mud conditions I’ve ever rode in. It was crazy out there. Saturday’s practice was actually good but all the overnight rain turned the track into a mud bath. Getting a good start was key to finishing the race in a strong position. Both my starts were great but in race one I made some mistakes and crashed twice. Race two was better. I got the holeshot but jumped the wrong line on the third jump and got passed. It was so muddy that it was impossible to find a way back past. Overall I’m pleased to have raced in the mud. We’re going to face these conditions at some stage during the year so it’s good to have gained confidence from today.”

Dean Ferris: “I rode well but it’s just been a bit of a lottery today. The conditions were really horrible. In race one I was going well but got completely filled in and lost my goggles. Race two was a bit more of the same. I ran as high as fifth but crashes cost me dear. It’s just been a difficult day all round.”