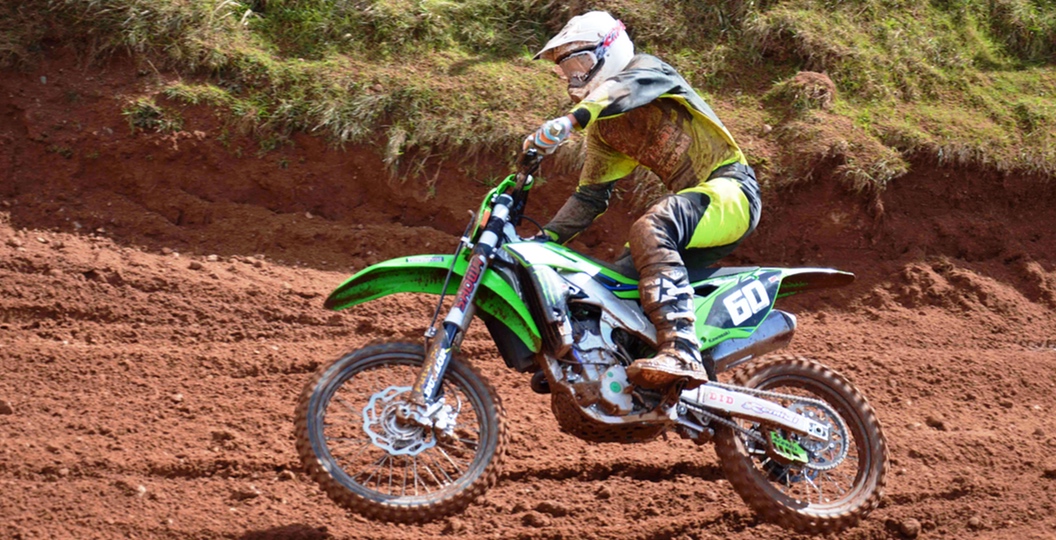 MIXED DAY FOR THE MEARAS AT TANDRAGEE

Tandragee Motocross Park welcomed the riders back for round 4 of the Ulster Motocross Championships with a modified track, good weather, and a good crowd of spectators on hand to watch a fascinating days racing.
The track was wet after some torrential rain on Thursday, but some excellent work by the track owner left the conditions perfect after practice.

Race 2 was another Meara win, once again chased down by Bird who fell on lap one and came from dead last in an exciting ride through the pack, with Keogh a fine third after a lightning start, Scott fourth, Browne a great fourth after another good start and Ryan Adiar from Banbridge fifth after qualifying on pole on his Adair Building Services KTM 350, Hamilton retired from this race after a first lap fall and did not re appear for race 3.

Meara’s now traditional Race 3 jinx reappeared when he crashed while leading and bent his subframe and handlebars, he gamely remounted the damaged Kawasaki and charged through to finish second behind a victorious Bird with Scott third again. Browne finished fourth ahead of Keogh with Adair sixth.

In the nutttravel.com Premier MX2 Class, Jason Meara arrived as clear favourite for the Class win on his Motul Oil/Watt KTM, however, his day started badly when he blew the head gasket on the race bike and only managed one lap in qualifying on his spare to place him 18th gate pick.

Race 1 saw him take a bad start after pole sitter Ryan Adair took the early lead on the Adair Building Services KTM, only to lose the lead to an impressive Richard Bird on his similar Five5motorpsort machine, big brother John Meara soon followed him through on the Watt Kawasaki, while Jason crashed off the middle table top and flattened his header pipe on the exhaust so badly the machine would not start to post a dnf, Adair held off a hard charging Jordan McCaw on his HTM Off Road Husqvarna, the Ballymoney man riding hard on the fast Tandragee circuit, fourth was Keogh now Kawasaki mounted, while fifth was Banbridge man Sean Devlin on his Yamaha and sixth was Jordan Scott having a run out on a 125 Husqvarna from HTM Off Road.

Race 2 and Richard Bird came won in imperious style after passing a hard charging Jordan McCaw, Jason Meara on the Motul Oils Watt KTM, had a horrendous start, crashing into holeshot rider Matthew Loughlin who managed to crash on his own, after a trip over the bars, Jason picked himself up and charged after the disappearing pack, posting fastest lap after fastest lap he managed to pick up valuable second place points, while brother John posted third, Keogh was fourth, Adair fifth, and McCaw sixth, these two battling all the way to the flag

This leaves Bird now leading Jason Meara by 18 points, not bad for a rider who has not competed on an MX2 bike since 2010, third is John Meara 14 points behind.
The Precise Protect Insurance/Matheson Project Semi Expert MX2 Class produced an overall win for Carrickfergus man Karl Thompson on his Risk Racing/GOMX Yamaha with two second and a win, while Rhys Graham managed two wins, but the middle result of only 10 points meant he only mad the second step of the podium, third was youngster Jake Hall from Magherafelt, his first adult podium, after some mature riding in the ricky conditions on his HTM Off Road Husqvarna, fourth was Larne teenager Cameron Turley on the little 125 HTM Off Road Husqvarna, posting a super third in race 2, while fifth was Ballycalres Kris Rea on a borrowed machine after his Yamaha developed a cracked head stock, not ideal over the big Tandragee jumps, fifth was Donegal teen Aaron Gardiner on his Honda, while sixth was Michael Clyde on his Honda.

This leaves Thompson with a 38 point lead over Rea with Gardiner 11 points behind the big Ballyclare man.

The Precise Protect Insurance/Matheson Project Semi Expert MX1 saw Championship leader Paul Atkinson from Glengormley take the overall on his Ulster Shredders Husqvarna 350 on a tie break from Ballymenas Ryan Eslers 350 KTM, Atkinsons last race win taking the overall for him, third only 4 points behind was Downpatricks Chris Orr on his Yamaha despite hitting the deck more than once, with Ronan Potterton fourth, and Moira man Jordan Blakely fifth on his JB Electrics 350 KTM, not bad for man only six weeks from his wedding, while sixth was Kevin Donnelly on his KTM.

Russell’s Motorcycles Clubman MX1 once again had the sight and sound of a two stroke winning the overall with Ciaran Boyle again brapping his Yamaha to the overall with two wins and a second, the first race won by Gary McGeown on his two stroke KTM, Jordan Allingham finished runner up on his EHA Honda 450, with McGeown third, fourth was Joshua Rea on his KTM, fifth was Ian Dunlop from Ballymoney on his Yamaha, sixth was Dungivens Ryan Canning on his KTM.

Spence Racing Clubman MX2 Class saw pole sitter local man Ruari Grimes from Lurgan only lasting to the first corner where the slippery conditions caught him out and he went down hard and was hit by a following rider causing a mild concussion and ending the local mans day, this left the field open for Sean Laverty to take three wins followed by Nathan Hamilton on his Yamaha to three seconds, and Jack Smyth to take his KTM to three thirds, Lewis Watson was fourth on his KTM, with Lee Jackson on yet another KTM fifth, with another Yamaha ridden by Tony Conlon sixth.

This leaves Hamilton comfortably leading the Championship by 74 points from Conlon with Laverty now third 30 points behind Conlon.

An exciting days racing in all classes, , champagne spraying, plates awarded, and everyone gathered for group picture to send to Wayne Garrett, mult Irish & Ulster Champion who is currently in hospital in Dublin with spinal injuries after an horrific crash at the Irish Championship rounds in Doon last weekend. All the motocross family in Ireland wish Wayne a speedy recovery, and all our thoughts are with Wayne, wife Sarah, and his family get well soon Wayne, we miss you.