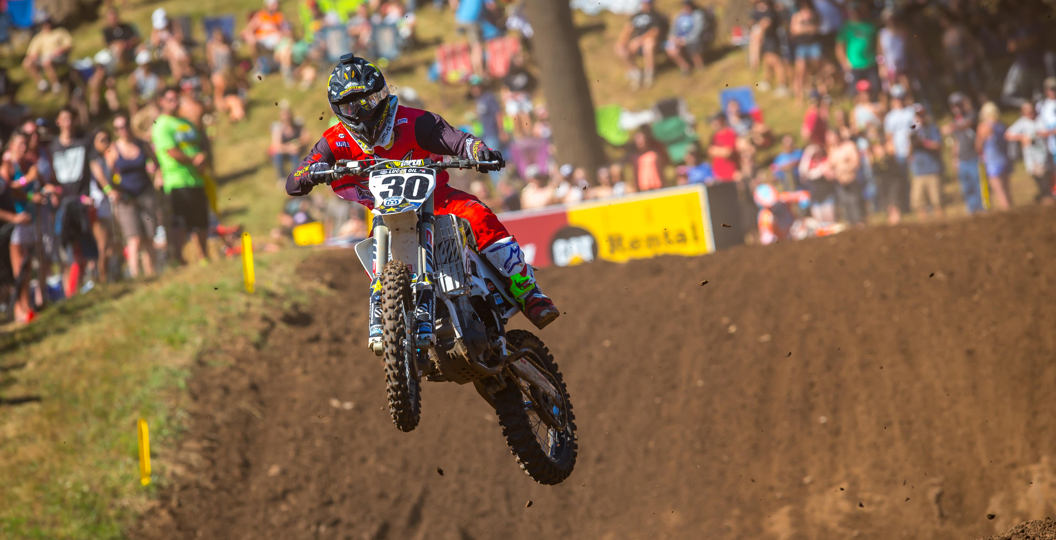 The Lucas Oil Pro Motocross Championship gets back at it this weekend at Unadilla, as the racers and teams just enjoyed their last week off before the end of the series. There are three more weeks of racing, then the USGP (if you’re so inclined) and bingo, bango, we’re into the off-season. I wrote out a column last week on MX Vice about silly season and I left one name out when it comes to riders looking for rides, or did I?

After eleven years of riding a 250F, Rockstar Energy Husqvarna Factory Racing’s Martin Davalos has been riding better on the 450F in this year’s outdoor championship. The veteran rider scored a podium at Washougal, along with numerous top five moto finishes. Davalos is getting better as the series goes on and when’s the last time you have said that about him? To be fair, the 450MX class started out a bit hurt in terms of depth and we have seen riders like Cooper Webb and Jason Anderson miss time but, hey, you have got to be in it to win it, right?

Davalos sits ninth right now in the 450MX points and, in nine tries at the outdoor series on the smaller bike, he has finished ninth one year and was never again inside the top ten. He also scored one podium finish in 250MX in all those years and many of those seasons he was on factory equipment. Simply put, he has never had the success outdoors that he has had indoors until now on the big bike.

If you’re a reader or listener of me, you know I’ve railed against Marty and his failures in the 250SX class. It has just never worked out for him time and time and time again. The one year he had a shot, when the top three riders in the class all got hurt, he himself was the victim of a mechanical that stole a very likely title from him.

One thing I’ve never backed down on is admitting that Davalos is one talented motocross rider. This guy has serious skills and I’ve often wondered out loud, because I do that a lot, if his time in 250s has come and gone and it is time to move up, as he’s not suited to the craziness of the 250F class. He is, in effect, “worried” about what happens if he just sends it and he is too old to have the all-out aggression that’s needed in that class. Set two cones up in a flat field and time the riders in the 250F class and Davalos probably comes out on top. Drop the gate with forty of them that have shut off their brain and that’s probably not Marty’s forte at this point.

“But Steve, why would he give up all that money in the 250 class?” is what I hear all the time and that’s true – that would be a hard thing to do. My point to that is the potential to make way more in 450s is there and he’s got the talent to do it. Take a lower salary and/or ride to try to jump start a career that, in my opinion, has been stagnant way too long.

The last couple of years Davalos has been working with ex-pro Tim Ferry (who you all know is one of my great friends as I wrenched for him for four years, right?) and he reports that he has been more than pleased with Davalos’ work ethic and training. Last year was only the second time Davalos has ever made every single MX race and I credit his work with Ferry for that.

Earlier in this outdoor season he and Ferry felt like his strength was not there for the bigger bike late in the motos and they worked on his shoulders to help that out. The proof is in the last half-dozen races that it worked. In 2017, late in the races, it is Marty Davalos who is charging hard and picking dudes off. Trust me – that’s never happened before. He’s a changed man and we’re seeing this.

When it comes to 2018, some of us (IE: me) may get our wish as Husqvarna have informed Davalos he’s out for next year and the Pro Circuit and Geico Honda teams appear full, as does TLD KTM and Star Yamaha. The only 250F ride that I can foresee being open is with JGR Suzuki on a bike that needs some work and might not be what Davalos likes. Outside of JGR, there doesn’t seem a logical landing spot for Davalos on a 250F next year.

In talking to Davalos and Ferry, they are playing this like a business and I don’t doubt that they’ll take the guaranteed contract on a 250 team over my plan of betting on yourself and trying to see if a 450 unlocks this potential. I wouldn’t recommend Martin Davalos of many years ago moving on up but, from what I’ve seen this summer and in talking to Ferry, I think this is a good move for him and these outdoors results back that up.

When I asked Davalos about moving up and if his results have warranted a full-time big bike ride he replied, “Man, let’s hope so. Let’s hope that somebody listens to you. I’ve been wanting to move up for so long. At the end of the day, right, I need a job. I got to wait and see what happens. Take whatever opportunity comes along. For me it’s just about career and business, nothing else. I would love to do a 450 ride like I dreamed of.”

There are plenty of good riders looking for a 450F ride, just as I wrote last week, so that might push Davalos down to 250s yet again. This summer has been a real eye opener for many people though and I’m betting for Davalos himself as well.