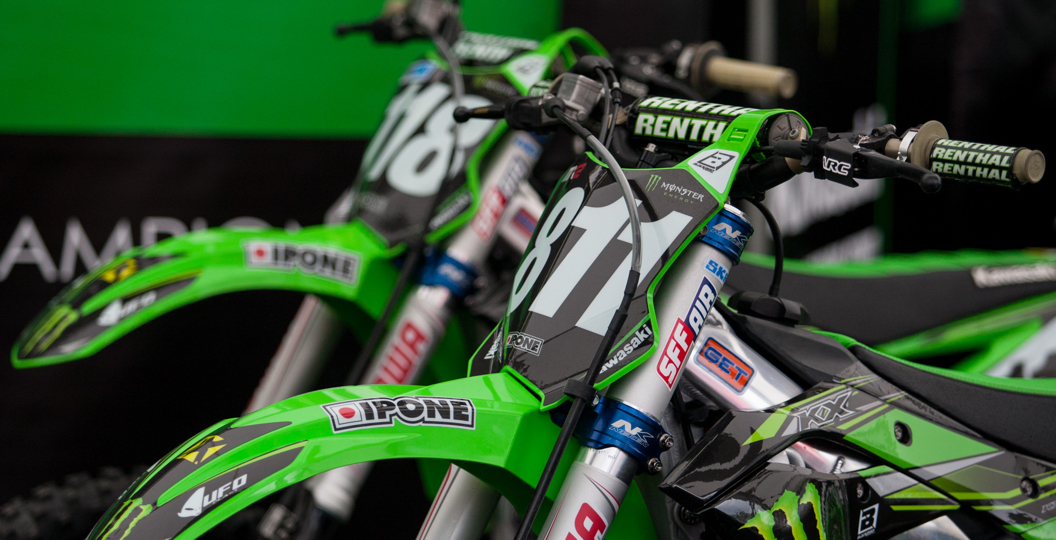 Since the beginning of the season the team has been hit by unfortunate injuries; three weeks ago in Valkenswaard, Adam Sterry damaged knee ligaments and will now miss the remainder of the season. The British rider underwent successful surgery, but he will not be able to ride his Kawasaki KX250F-SR before the end of the FIM World Championship so the team was looking for a rider to jump on the bike for the remainder of 2017.

Young Italian Morgan Lesiardo, only eighteen years old in mid-April and leader of the European MX2 series with three podiums during the first three rounds, has been selected to join the team and will compete in the MX2 Grand Prix of Germany as there is no round of the EMX that he normally competes in that weekend.

Further good news is the return of Stephen Rubini in Germany; the young Frenchman recovered from an ankle injury sustained a few days before the European GP in Valkenswaard. After successful tests this week he will line up alongside Petar Petrov and Morgan Lesiardo under the Monster Kawasaki awning in Teutschenthal.

Morgan Lesiardo: “I’m so glad about this opportunity with the Monster Energy Kawasaki MX2 team! I showed good speed in the first three rounds of EMX with the Italian privateer team Maggiora Park and I want to thank them so much because it’s also to their credit that I’m here now. I will continue to race the European championship, try to gain experience and also achieve good results in MX2 GP class, so I want to thank so much all the people that work in this fantastic team, Kawasaki, Monster Energy plus all the sponsors of the team and all my sponsors that have believed in me! It was my dream when I was a kid and now it’s reality; I want to take this opportunity with both hands and show how much I can do across the remainder of the season!”

Jean Jacques Luisetti: “So far we have been pretty unlucky with injuries, and as Adam will not be back racing this season we needed to sign another rider to respect our responsibilities to Kawasaki and our sponsors. First of all, I want to wish Adam a speedy recovery. Then there were several options but, as soon as the Maggiora Park team let Morgan Lesiardo become available, we expressed an instant interest in him. He is young, has been really strong in the European MX2 series, and we’ll start working with him next weekend in the World MX2. I really want to thank his former team Maggiora Park; they understood the situation and the chance offered to Morgan. For us it will be a pleasure to have the red plate on our Monster Kawasaki for the next round of the European MX2 in France, and of course we continue to work for the future of the team.”

Adam Sterry: “I’m really gutted about this injury as at the moment it seems there is a black cloud hanging over my head. I felt we had just sorted a few things out then a small dab of my leg and this happens. Everyone worked really hard and I didn’t manage to show what we were capable of yet. I had surgery last week on my ACL and it went very well! This week I start my physio to get my knee back to 100%.”