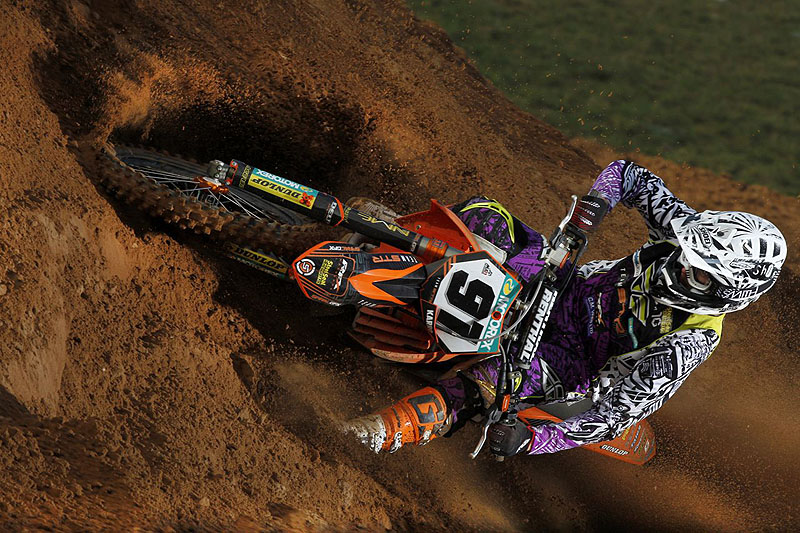 Karro on a roll

It seems Matiss Karro is taking his shot at a full GP season with both hands if early form is anything to go by. After spending the previous week practicing in Belgium the team met up at Mill for the 4th round of the Dutch Championship and with an array of GP stars in the field both Matiss and teammate Nathan Parker knew they were in for a tough day.

Qualifying. Whilst not exactly setting the world on fire in timed qualifying the boys both made it into the top fifteen with Karro in 11th & Parker in 14th.

Race 1. Parker blasted out of the gate and entered the first turn in 4th with Karro in 10th but on the second lap disaster was to strike as both riders went down in consecutive corners. Karro picked rejoined in 26th with Parker down in a lowly 35th, but they both set about clawing back places at an impressive rate. Parker was to drop it again and ended the race in the pits, clasping his damaged ribs again and playing no further part in the days proceedings. Karro, on the other hand just kept picking off riders one after the other, eventually crossing the line in a hard fought 9th place.

Race 2. Karro made a good start in 8th and looked like he meant business as he blasted past Strijbos, DeReuver, Brakke & Schiffer to move up to 4th. After a fall by second placed man DeDyker he was up to 3rd and was now pushing Factory Honda pilot, Goncalves. Lap after lap he pursued him and something had to give and it was the Honda engine which ran out of steam as it ground to a halt after losing all its oil. Now in second Karro just needed to maintain his pace until the end of the race, but with only a week’s preparation in the deep sand of Belgium and Holland his pace dropped in the last two laps. With Strijbos & DeDyker having spent the last month practicing and racing in these conditions it was disappointing but not surprising that they swallowed up the youngster, leaving him in a fantastic 4th at the flag. With most of the big guns struggling to put together two good results his 9-4 scorecard was enough to give him his 4th podium in a row. Although exhausted and struggling to even get off his bike, a pat on the back from Harry Everts brought out one of Karro’s trademark smiles as he realized he had impressed all who had witnessed his great performance.