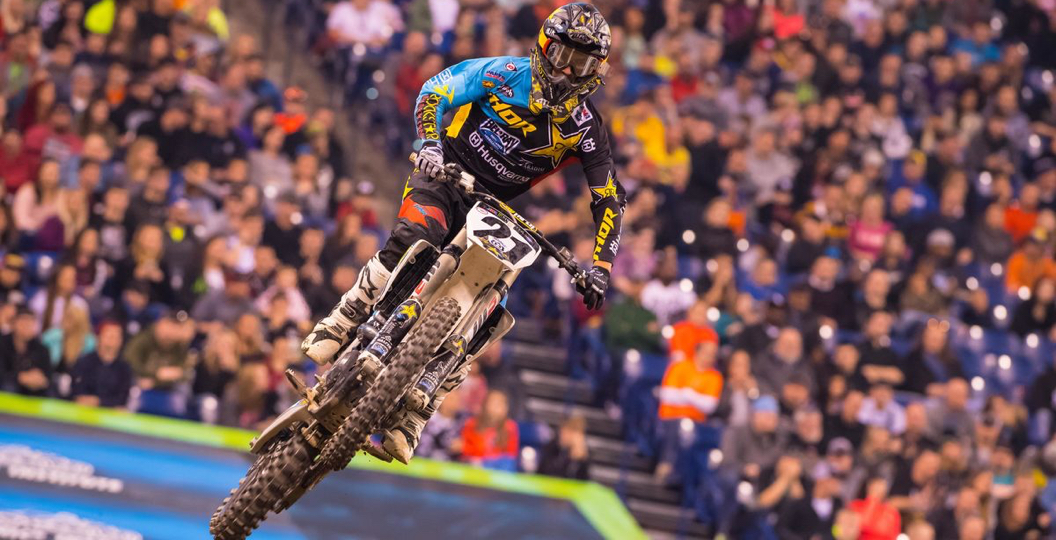 A podium finish, top qualifying time, and two riders in top three overall rider point standings made for a successful night for the Rockstar Energy Husqvarna Factory Racing team at the 13th round of AMA Supercross on Saturday, held at the Lucas Oil Stadium in Indianapolis, Ind. Jason Anderson and Christophe Pourcel continued to earn valuable championship points in the 450 class, while Martin Davalos returned to the track after a one-week break in the 250SX East class.

Jason Anderson started second in his heat before making an impressive inside pass to take over the lead in the second lap. He held strong to the finish to take the win. He pulled a top-10 start in the main and quickly focused on moving through the ranks. He fought his way through the pack and pushed his Husqvarna FC 450 up to third by the 12th lap before having to navigate through lappers to hold his position. He stayed the course and finished the race on the podium in third. He is currently third overall in 450 rider point standings.

“Indy was good for me,” said Anderson. “I had some good practices. The track was very rutted, but I still felt like I was riding well and I ended up qualifying fourth. I got into the lead in the heat race and was able to hold off Dungey for the win. I felt like I had a good start going into the first corner of the main, but then I just got shuffled back really quick. It was chaos for a little bit, but I managed and came out with a third.”

Martin Davalos returned in 250SX East after the class took a one-week hiatus. He qualified fourth-fastest during timed practice, and was looking strong heading into the night show. He was third at the start in his heat and moved to second in lap two. He was quickly closing in on the lead in the final lap before cartwheeling and remounting in third where he finished. He posted the fastest lap time of the heat despite the crash. He pulled a mid-pack start in the main and started navigating his Husqvarna FC 250 through the field to gain position. He made it up to third by the halfway mark, and held strong until there were two laps left when he went down while making his way through lapped traffic. He remounted and finished the race in fifth. He is currently third overall in 250SX East rider point standings.

“The track was really demanding tonight,” said Davalos. “I had three pretty big crashes. I’m just glad I’m ok. I definitely had to stay on my toes. I had a good heat race, but lappers got in my way in the main. I’ll just go back to work on Monday and focus on St. Louis.”

Christophe Pourcel took some time off due to injury, but came back with a vengeance by posting the fastest qualifying time of the night in the 450 class. He was sixth at the start of his heat and made his way to fifth before going over the bars. He came back in the semi to finish second and transfer to the main. He started third in the main and held strong in the top-10 to finish seventh.

“I got the fastest time in practice so that’s good,” said Pourcel. “I want to show the team that I can be in front, but my neck is still a little sore. I just stalled the bike in the heat and went over the bars pretty hard. I had a lot of pain in my ribs so I had to get it checked out after that happened. I had a good start in the main. If you believe in yourself and think you’re going to do well you can get a start from anywhere. It feels good to finally start in the front. I had a couple good laps with the guys up front, then decided to take it easy because the track is rough and I was pretty beat up. I’m mad because I crashed, but I just wanted to stay on two wheels and take it easy because it was my first race back. I’m happy to finish seventh.”