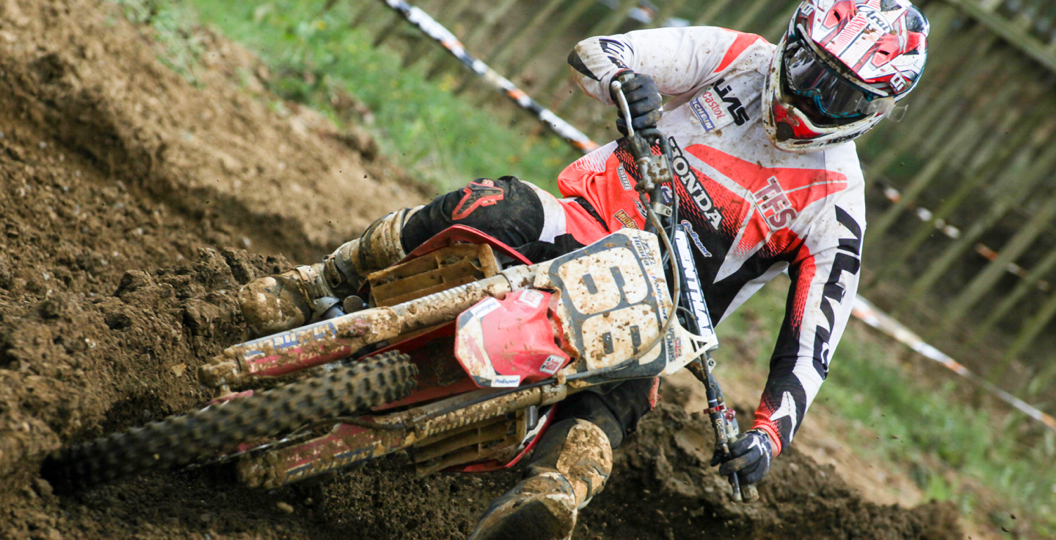 For the past weekend, JAR Honda split in half with MX2 rider Lewis Tombs continuing his campaign at the fifth round of the MX Nationals while MX1 rider Matt Moffat decamped to Lommel in Belgium for the final round of the EMX300 Motocross European Championship.

Canada Heights enjoyed beautiful summer weather all weekend long, and on a well-prepared track, Tombs went out to qualify in sixth. Unfortunately the lack of numbers in the Pro classes due to clashes with other events forced the organisers to combine the classes, but with the MX2 class allowed to pick gates first, Tombs was off to a good start.

Tombs’ first race started well enough in fourth. He soon found himself in third, holding on to it until the second-last lap where he was forced to concede the position. The first raceon Sunday morning had Tombs start down the pack somewhat, but he soon was back in eighth before slipping back. A last minute spurt gave him enough energy to pass two more riders before the chequered flag, ending seventh. The final race on the weekend looked to be an improvement, but whilst in fifth, Tombs went down hard, losing all his places in the process. After working his way back to fourth, it seemed like the battle was won, only to be pipped to the post in the penultimate lap again. The fifth place, combined with the other two results, gave Tombs fifth overall on the weekend.

For Moffat, racing the sand track of Lommel was a dream come true. His weekend started early, with free practice scheduled at 8 o’clock. This was followed by the qualifying session shortly before noon, in which Moffat qualified sixth-fastest. The first race went to the line as the sun sank towards the western horizon. Around the first corners in the top ten, Moffat went down several times and lost three places in the process. He quickly remounted and worked his way forward again, only to run out of fuel with a lap to go, resulting in a twentieth place. The next race, on Sunday morning before the world championship races, saw Moffat get out of the gate in the top ten. Some quick work saw him move into the top five, where he was briefly involved in a scrap with freshly-crowned EMX300 champion Samuele Bernadini. He emerged victorious to end fifth for a twelfth place overall on the weekend.

Overall it was not such a great weekend, I don’t think I rode that good. I was fourth in the first race but third for most of it, and Bryan got me with a few laps to go, which I’m pretty disappointed about. In the second race I had an average start, was coming through and then crashed in the fourth lap, which put me way back, so I had to work my way back through. Towards the end I was actually riding alright and was catching the MX2 group up but couldn’t pass on the last lap. In the last race I had another bad start, just worked my way through and was fourth, but then someone got me again on the last lap. It’s disappointing, but I have to keep working.

I travelled to Lommel this weekend to race the final round of the EMX300 Two-Stroke championship. Qualifying was decent, ending up with sixth gate pick. Race one I had an OK start, placed about tenth, pulled through to fifth before a small crash set me back to twelfth. I pulled back to seventh to then run out of fuel on the last lap. We made some bike changes on the Saturday night for race two on Sunday. Another top ten start gave me a decent platform to work from, working up to fifth by end of the race. Thanks to everyone who helped, JAR Honda Racing, also Eastwood Racing and mechanic/chef John Robson, I appreciate it.