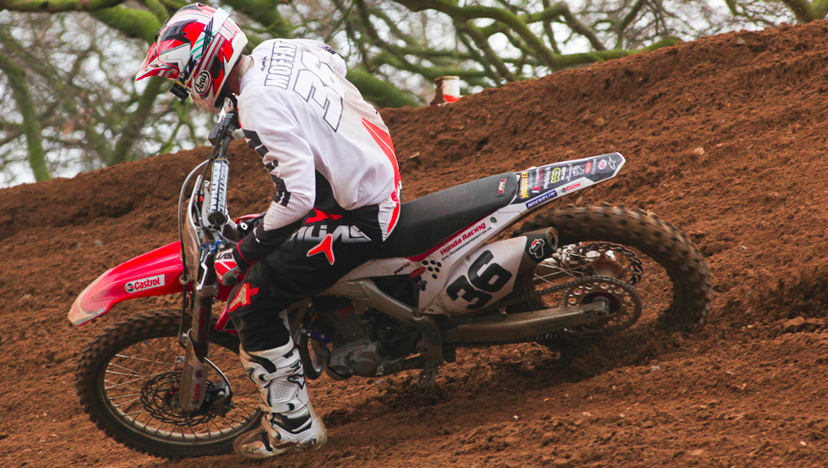 The season continues apace for the JAR Honda team. This past weekend, the jolly band that is the Maxxis British Motocross Championship moved on to team rider Lewis Tombs’ back yard – Cadders Hill, just outside Lyng in Norfolk. Bad weather threatened to dampen down the event, but it soon moved through the area and left the track moist and prime for some hard racing.

On Sunday morning, Tombs put in a quick time that put him squarely in the middle of the top twelve, but a small mistake in the super-pole cost him his spot and he slipped to twelfth. For MX1 colleague Matt Moffat, there was not much change. A ninth place in qualifying also put him into the super-pole where he would end tenth.

Tombs quickly got into the groove in his first race. Through the melée of the first corner in seventh, he spent the majority of the race in sixth chasing after another local, James Cottrell. After a hard battle for his position, he dropped back to seventh with just four laps to go. The second race got off to another good start, but a small crash cost him some positions early on. Some quick passing back immediately afterwards minimised the damage and he finished the race in a lonely tenth place. The final race was a steady climb to seventh in the last lap for an eighth place overall.

In the MX1 class, Moffat found himself in almost the same pattern. The first race got underway in eighth place, from where he slowly worked his way closer and closer to his rival in front to make a move with minutes left on the clock. With a seventh in the bag, Moffat set his eyes higher, but a small crash in the second race cost him his top ten position that he spent all race trying to recover. He finished the second race in eleventh. The final race did not go as planned either. Fighting off fatigue and advances by Shane Carless throughout, he finished fourteenth, having had to concede his thirteenth place with the final lap board out. He nevertheless went home with his goal, a top ten overall, achieved.

Yeah, it was a good day. I qualified for super-pole, which I was pleased about, but I messed up my lap and got twelfth, but I still got a good gate pick. The first race I got a good start, was about sixth and just rode a steady race and ended up seventh, which is my best result so far. In the second race I got a great start, made some passes early on, was in eighth or ninth and then had a little tip-over and came back to tenth. For the last race we changed quite a few things actually and it seemed a lot better. We came away with a seventh and an eighth overall which is a good day and I’m really pleased.

I wanted a top ten and was tenth, so I was happy with that, but the last race was a disappointment. I didn’t feel very happy with my physique perhaps, my legs and stuff, and the suspension, because this is a man’s track and I struggled with it. But I’m eleventh in the championship and I’m happy with everything, the team’s good and the bike and everything, so I need to do some practicing before the next round.

It’s nice to see the progress that we have made from round one. Both our guys made it in to the top ten today Lewis made a huge step forward in race three, maybe not with his position, but he has closed the gap to the group in front. I believe that with his lap times and consistency if we got away with them at the start we could have been fighting for a top five today. Matt again has proved that he is capable of strong top ten finishes. Race one today was really impressive by him, he’s gelling well with the Honda and constantly making progress, and with a little more work I think we can take him to the next level. I am happy for our team and our sponsors.