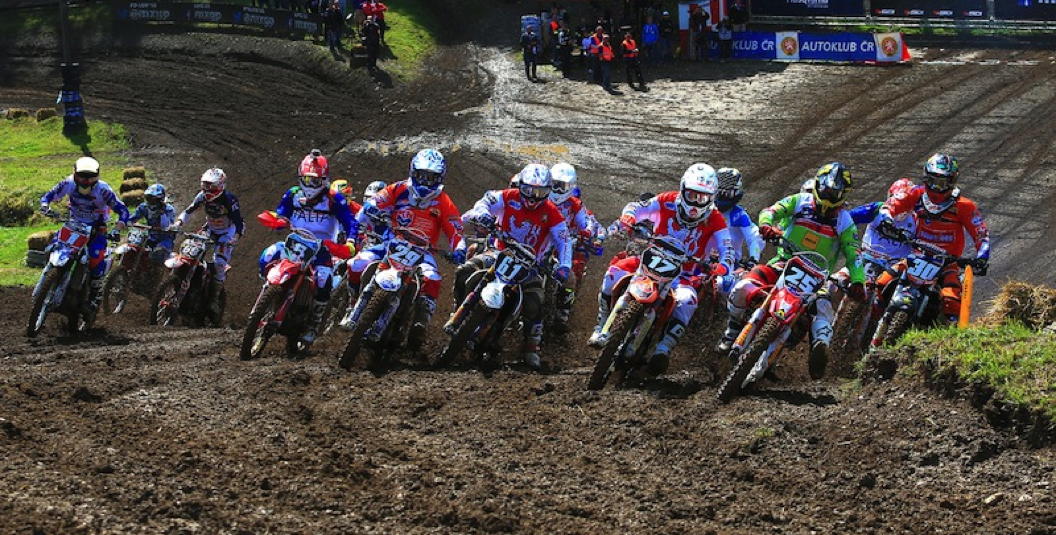 PACOV (Czech Republic), 24 August 2014 – It will be a celebration of pizza, pasta and prosecco today inPacov after the Italians, both male and female, walk away as the number one motocrossing nation inside Europe.

After qualifying yesterday, the Italians lined up on pole today in both Motocross of European Nationsand Women’s Motocross of European Nations divisions. While they embraced the early buffer it’s a commonly known fact that nothing in motocross is set in stone, especially when rain and weather becomes a factor. Despite the early morning lashing of rain which lathered the hilly hard packed circuit of Pacov, the Italians brought their ‘A’ games and were rewarded accordingly.

In the EMX125/250 division Honda Gariboldi’s Tim Gajser was out to show Europe what he is made of. The Slovenian was super quick out of the gate snatching the holeshot in race one and checking out to cross the line half a lap ahead of Brian Bogers who was flying the flag high for The Netherlands in second.

Chasing Bogers home archrival Michele Cervellin, from Italy, pushed the Dutchman to the checkers but couldn’t quite find a way through meaning he would have to settle for third ahead of Frenchman Nicolas Dercourt and local hero Czech Vaclav Kovar.

It was an unfortunate state of affairs in the second moto for Slovenia’s high-flyer Tim Gajser as his day came undone when he buried his bike in a patch of deep mud. While Gajser battled to free himself, Dutchman Brian Bogers took the reigns to bring home a comfortable victory for The Netherlands.

Meanwhile behind him, there was a mean battle for second as Frenchman Nicolas Dercourt went head to head with one of the local legends Martin Krc. Despite Krc’s impressive effort, when the checkers were waved it was Dercourt who took the 22 points for second. Coming home in a comfortable fourth the Italian Michele Cervellin held off the best finishing 125cc two-stroke rider of the day Frenchman David Herbreteau.

In the EMX85 it was a carbon copy performance of yesterday for Dutchman Roan Van De Moosdijk who soared his way to a convincing victory ahead of Italian Paolo Lugana. A further seventeen seconds back from the top two, Frenchman Calvin Fonvielle took third ahead of another Czech star on the rise Petr Polak. Young Italian speedster Gianluca Fachetti rounded out the top five.

In race two, Roan Van De Moosdijk proved to be untouchable once again, cleaning up for another win while the tiny Italian stallion Gianluca Fachetti had a brief run in with French wonder Calvin Fonviellebut soon shook him for a comfortable second. Fonvielle settled in third while San Marino’s Andrea Zanotti and Italian Paolo Lugana rounded out the top five.

After the points where tallied up, Italy topped the Motocross of European Nations charts with their team of Michele Cervellin, Joakin Furbetta, Gianluca Fachetti and Paolo Lugana, while The Netherlandsput in a super strong effort with their team of Brian Bogers, Rene De Jong, Roan Van De Moosdijk andRick Elzinga for second. Last year’s champions, France, were forced back to third with their team ofNicolas Dercourt, David Herbreteau, Calvin Fonvielle and Brian Moreau Strubhart, while the localsTeam Czech Republic, Vaclav Kovar, Dusan Drdaj, Petr Polak and Daniel Stehlik edged out Team Slovenia for fourth, who used the awe-inspiring performance of Tim Gajser in race one combined with the efforts of his young teammates Luka Milec and Jan Pancar and Miha Bubnic to wrap up this edition of the MXoEN in fifth.

There’s no going easy on the women of our sport and the weatherman reiterated that fact today as he allowed the heavens to open up throughout the duration of both races. While it was more or less a mudder, it didn’t phase the current FIM Women’s Motocross World Champion Kiara Fontanesi as she took the less than ideal circumstances with a grain of salt to dominate both races which thanks to the fifth place of her Italian teammate Francesca Nocera landed Italy on the top step of the podium. Meanwhile,France had a rough start to the day when their star rider Livia Lancelot binned it on lap one in the first race. As expected, the French ace remounted and started picking off places but as time expired she was forced to settle for fourth. Lancelot soon redeemed herself in race two pushing the champ, Fontanesi, home for second which combined with French teammate Justine Charroux’ seventh in race one landed them on the second step of the podium.

Germany managed to come away as bronze medalists thanks to the consistency of former FIM Women’s Motocross World Champion Stephanie Laier and teammate Larissa Picoto while The Netherlandsrounded out the top four with yet another impressive performance from the youngster Nancy Van De Venand her teammate Marianne Veenstra.

All the photos of the MXoEN in Pacov, Czech Republic, will be available here

Weather conditions: sunny with some showers