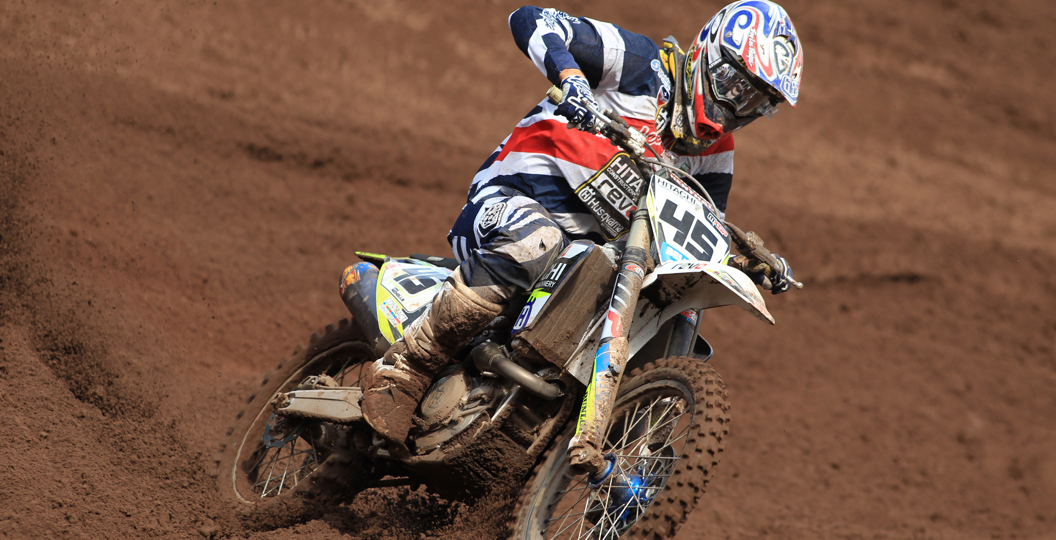 The famous venue of Hawkstone Park played host to the third round of the Maxxis ACU British Championship supported by Pro Clean. With the championship now in full swing all the Husqvarna teams were looking to continue their strong starts to the season and with sunny skies it was set to be a great day.

Light overnight rain had left the track in ideal condition ready for the morning practice and qualifying sessions. In the MX2 class Bryan MacKenzie on the Apico Husqvarna was the fastest of the FC250’s in fourth place ahead of team mate and Championship leader Steven Clarke in fifth and Jordan Booker on the MVR-D Fuel 10K Husqvarna in sixth.

After the lunch break in was time for the first MX2 race of the day and when the gate dropped it was Husqvarna riders who dominated the top five with Bryan MacKenzie getting out front for the early race lead ahead of Brad Todd in third, Clarke fourth and Booker in fifth. As the race continued, MacKenzie started to pull a healthy gap at the front, while Clarke moved into third. At the halfway point Clarke made a couple of mistakes and would slip back to fourth with Todd and Booker both losing positions. MacKenzie rounded off a great opening race to claim a start to finish race win with Clarke in fourth, Todd in seventh and Booker in eighth.

The second of the MX2 races would see Clarke make a good jump out of the gate but was boxed in on the opening turn and dropped outside the top ten. MacKenzie also suffered bad luck on the opening lap and would have to mount a charge from outside the top 25 to recover into ninth place at the finish. For Clarke a crash on second lap hampered his progress further but the Apico Husqvarna rider battled back to claim a well-deserved third place.

Clarke’s 4 -3 scorecard gave him third overall on the day, meaning he is only trailing the championship lead by six points. Race one winner Bryan MacKenzie finished fourth overall and moved up to third in the Championship, while Brad Todd on the Planet Advanced Racing Suspension/ Braithwaites Husqvarna finished tenth overall.

Podium finisher Steven Clarke commented that “it’s been a tough day. I’m gutted to lose the Red Plate, but I’m only a few points down in the Championship and I think my second race result shows that I’m prepped to battle for this title to the end.”

Meanwhile in the MX1 class Jake Nicholls powered the Hitachi Construction Machinery REVO Husqvarna to fourth fastest in morning qualifying ahead of Tanel Loek on the MVR-D Fuel 10K machine in fifth and Ryan Houghton on the Houghton Racing Ltd Husqvarna in ninth.

The opening MX1 race saw Jake Nicholls make a strong start and round out the opening lap in fifth while fellow Husqvarna rider Tanel Leok was in tenth place after battling from a bad start. During the first half of the race Nicholls pushed forward into third before taking advantage of a mistake by Tommy Searle to move into second but would slip to third at the finish while Leok would recover to finish in seventh at the flag.

The final MX1 race of the day saw the Hitachi Construction Machinery REVO Husqvarna of Jake Nicholls power up the start straight and round the opening turns just behind Shaun Simpson in second and would press for the lead in first half of the race. Another top ten start for Leok would see him push forward early on to finish in fifth at the flag with Ryan Houghton just behind in ninth. Meanwhile Nicholls would once again loss out to Tommy Searle.

Jake’s 3-3 scorecard saw Nicholls return to the British podium for the first time in nearly two years with third overall and moved up to fifth in the Championship, while Leok finished the day in the fifth overall and Ryan Houghton in ninth.

Podium returnee Jake Nicholls commented: “Today was really positive to get a strong first moto result which I was happy to finish in third, then in the second race I was running second for most of the race and kept Simpson honest, but towards the end I faded slightly but I was keen to secure the podium with another third. I know where I need to improve in the coming weeks.”

The championship returns to action in three weeks’ time in Northern Ireland at the superb Desertmartin circuit on the 12th June.