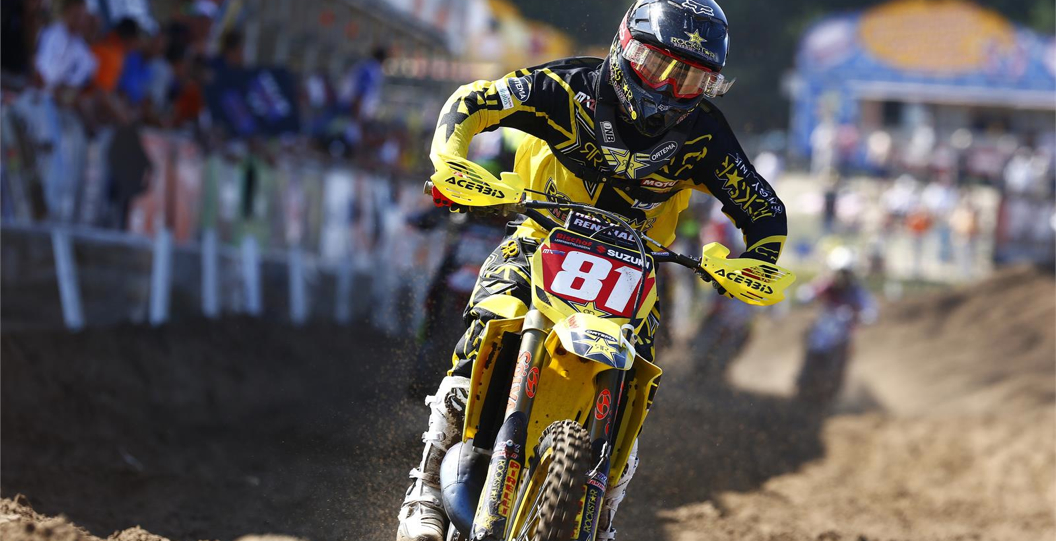 It was celebration time for Rockstar Energy Suzuki Europe as Brian Hsu made sure of the team’s first EMX125 European Championship title with the RM125 by finishing second overall at the Grand Prix of Belgium and the final round of seven in the hotly contested two-stroke series.

The sand at Lommel carried little in the way of surprises. The terrain was a bumpy, difficult and tiring as ever and 21,000 spectators surrounded the largely flat and demanding course and basked in some fine summer conditions for the MX2 and EMX125 races.

Hsu came into the GP defending a slight lead in the EMX125 standings over Davy Pootjes who ultimately could not compete due to injury. The German rode steady and without large mistakes through the motos on Saturday and Sunday morning for two third positions and his second major accolade after scooping the 85cc Junior World Championship last year. Hsu had time to drink a toast with the team but his work for 2014 is not yet done. The teenager will be aiming to add the 125cc Junior World Championship crown to his CV by winning at Bastogne (also in Belgium) next weekend.

On the factory RM-Z250s Glenn Coldenhoff and Jeremy Seewer finished seventh and 12th overall respectively at the Grand Prix that was the 15th of 17 in the MX2 campaign. Coldenhoff made his first race return since an amazing recovery from a knee reconstruction earlier this season. The Dutchman was not helped by his unwilling part in a pile-up during the Qualification Heat on Saturday but pushed to sixth in the first moto and then 10th in the second while trying to balance his lack of sharp race fitness with a desire to register two effective results on the day.

Seewer started on the outskirts of the top-10 in the first moto for what was his first Grand Prix at Lommel. The Swiss motored to 10th at the first time of asking and then was 13th in a tougher and tiring second race. The rookie appreciated that his lack of decent sand riding and prime conditioning for the demands of the Belgian circuit meant designs on better classifications were perhaps unrealistic.

Seewer is 10th in the MX2 world championship standings while Coldenhoff has reactivated his account and is 14th. A long trip to Brazil and Mexico lie in store for Rockstar Energy Suzuki Europe for the last two rounds of the FIM Motocross World Championship. First the team will have the FIM Junior World Championship meet at Bastogne and two races in the German ADAC MX Masters competition at Jauer and Gaildorf in August before starting the transatlantic trip at the beginning of September.

“I can’t say this was exactly what I was expecting. It was already tough after the crash on Saturday which I couldn’t do anything about. Coming back through the field was even harder work and I knew already I was not the fittest guy out there. In the beginning I was fourth and made some passes but after about 20 minutes I got pretty tired. It happened even earlier in the second moto. Coming here I had a good feeling in the sand and all the people around me gave the confidence to race here when I wasn’t so sure at first. Seventh overall is not really what I wanted but the pressure is off now and we are going to work hard. We know what we have to do for Brazil and we’ll be back swinging there.”

“Not too bad. I was quite interested to see how I would do this weekend because I remember how tough it was two years ago at the ‘Nations. I was really happy with the track actually. My start was not the best in the first race but I had a really good rhythm and passed some guys early on. I got tired after 25 minutes but I was still fast enough to keep tenth place which was really good for me. I know I have to work more on this for the future and it is something to aim towards. I had probably one of my best starts of the year in the second moto but ran quite wide. For three or laps my speed was good but then we started swapping some positions and my muscles and back started to tire. I had a small crash but finished the moto. Overall for a track like Lommel I’m quite happy. The speed is there but with some better physical condition and more sand riding then I can do much more.”

“The beginning of the season wasn’t so good and I had some problems but I grew into the year and got much better. I felt good and was riding good. I know in Loket I had to get some points ahead for the championship for this sandy track where we race something similar perhaps once a year. Today was good, it was tough. I came here to win but couldn’t because Ostlund was so fast. In the back of my mind I was thinking about the championship and to be safe. We go to the world championship now and I have to keep working.”