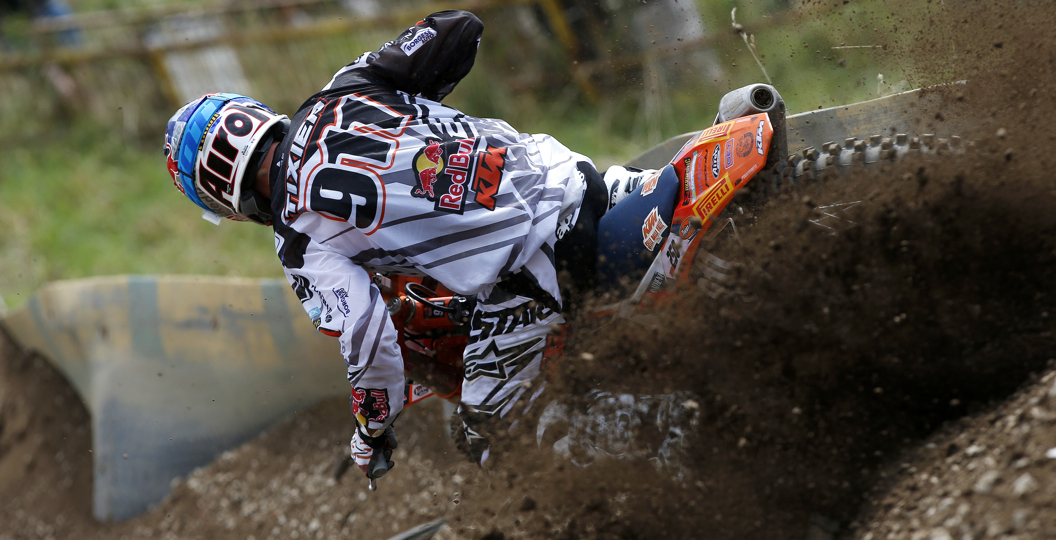 Hot and Cold: GP of the Czech Republic

If there is one thing that detracts from the FIM Motocross World Championship, it is that the race for the victory is relatively predictable (in both classes) more often than not. However, that certainly was not the case this past weekend, as four riders took their first moto win of the year!

Jordi Tixier: After so many doubted him, including Red Bull KTM (they elected to not re-sign him for next year), Jordi Tixier proved everyone wrong by claiming the first GP win of his career on the slick surface of Loket. The common consensus is that he does not do well under pressure, and honestly, recent events support this. However, Jordi must be feeling the most pressure that he ever has at the moment, and he delivered immediately, as his moto scores of a first and a fourth were more than enough to see him stand atop the podium.

Valentin Guillod: It has been quite clear that Valentin Guillod has the speed to climb up onto the podium, but for whatever reason (mistakes have been the main culprit), the result that he desires has not materialised – until now that is. Guillod secured second overall with conviction, as a brace of thirds served notice that he was deserving of the spot. In the past we have seen that the momentum gained from an experience such as this can propel a rider to the next level, so it will be interesting to see how Valentin fares at the remaining three rounds.

Christophe Charlier: The 2014 season is not one that Christophe Charlier will reflect on with fondness. In fact, he has achieved so little that no MXGP team has offered him a deal for next year, and he is considering a switch to enduro. However, his performance at Loket may change this, as he took a convincing second moto win. It seems that the Frenchman is one of the riders that thrives when he realises that he could potentially steal a victory – this past weekend was no different. It is unlikely that he will repeat this performance at Lommel on Sunday, but he surely would have prompted interest from some team managers now.

Jeremy van Horebeek: You would think that a rider taking his first MXGP win, and beating the reigning champion straight up, would be surprising. But, honestly, this is not at all. It has been a long time coming for Jeremy, and Loket is a track that lends itself to his skillset, whereas Cairoli is not a fan of the place. I was beginning to doubt whether he would be able to clinch the second GP victory of his career this year, but the monkey is now off his back, which will undoubtedly help him moving forward.

Kevin Strijbos: It was not too long ago that the Belgian riders struggled on hard-pack, but dominated in the sand. However, every rider challenges those stereotypes now; guys like Jeremy van Horebeek and Kevin Strijbos thrive on slick, rocky circuits like Loket. Kevin came close to stealing the win in the Czech Republic last year; he went one better this past weekend, as he stole the first moto win. This was Strijbos’ first race win since the Latvian GP in 2012 (when he rode for HM Plant KTM UK), so it has been a little while. Kevin has already stated that his aim is to win this weekend, so his confidence and goals have risen considerably.

Clement Desalle: Just three rounds ago, Clement Desalle was having the best season of his career. However, after returning to action this past weekend, his year appears to be over, as he will take some time off to recover from the left scaphoid injury that he sustained in that nasty fall at Maggiora. Why has he only just made this decision? In a team press release, he mentioned that he really noticed that his condition was not where it needed to be in the first moto at Loket, because this niggling injury has restricted his training mid-week. It is unfortunate, but with his title aspirations diminished, it’s better to ensure he is one hundred percent going into next year.

Max Nagl: Following his qualifying heat win on the Saturday, hopes were high for Max Nagl heading into the two points paying motos. However, unfortunately, Max could not put it together yesterday, as he was buried down in eighth overall. Bad starts hindered him, especially as Loket is notoriously hard to pass on. The first moto was fairly average, as he climbed his way back to a fourth, but a fall in moto two left him down in seventeenth overall. I’m sure that Nagl would like to win a round before this thing is done, and it could happen. I do think that this past weekend may have been his best chance to get that victory though.

Dean Ferris: Dean Ferris is another rider that struggled to translate his speed from Saturday to Sunday at Loket, as he could only garner a twelfth overall. The Australian admitted that he was riding too defensive in moto one, which cost him a couple of spots, hence why he dropped from seventh to ninth. It still was not an awful race, but it was not great in comparison to his ride in Finland two weeks ago. A fall in race two hindered him in the results, but although he did not have any flashes of brilliance, it sounds like he is still garnering interest from a few great teams.

Dylan Ferrandis: Dylan Ferrandis had to be perfect at the final four rounds in order to win the MX2 world championship. Unfortunately, his title hopes have gone up in smoke after his results at Loket, despite the fact that he was arguably the fastest rider in the class. In moto one he had a crash on lap one, which left him in dead last and forced him to pull into the mechanics area. Although he gave it his all, he came up just short of a point. Dylan then finished second in race two after starting eighth, so the speed is there. The Frenchman could pass Romain Febvre in the standings, but the title is now mathematically out of reach.