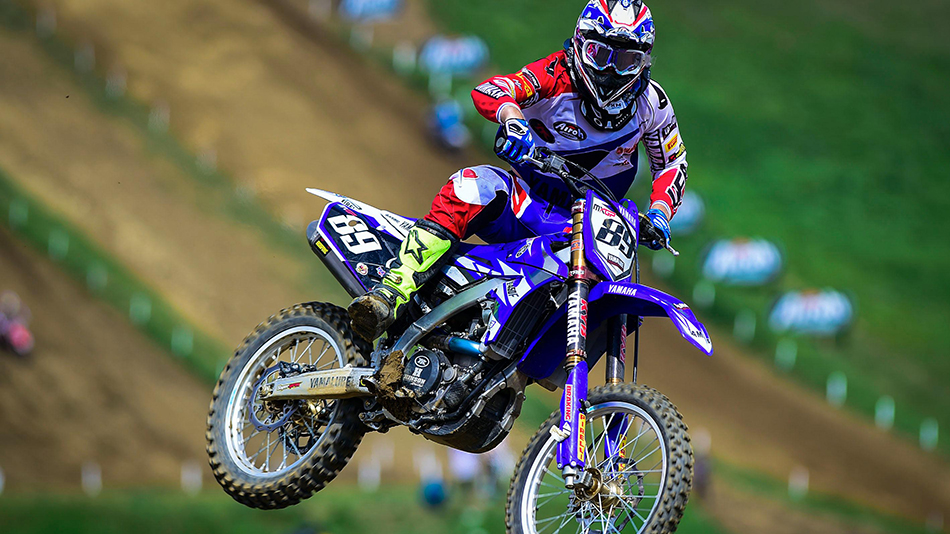 Hot and Cold: GP of Bulgaria

The fast, slick Bulgarian hillside of Sevlievo was the site of round five of the 2014 FIM Motocross World Championship this past weekend. This edition of the Bulgarian GP was quite different to the ones we have seen in recent years, as the weather did not cooperate for the most part, and changes to the track altered the dynamic slightly.

Antonio Cairoli: Surprisingly, Antonio Cairoli claimed the GP win in Bulgaria this past weekend. Now, you are probably wondering why it was surprising, right? Well, let me to fill you in. The conditions at the track are far from where he is most comfortable; this is clear by the fact that the last time he won at the venue was in 2007! The Italian usually struggles in the wet conditions, too, so it initially looked like a bad combination for him. But, he thrived, which he was clearly elated about. It was a win that will surely boost his confidence in future events that resemble this, which is bad news for his competition.

Ben Watson: Obviously, every British fan was very happy when the news filtered through that Ben Watson had won the first EMX2 moto in Bulgaria, and tied for the overall victory. It is quite clear that Ben has made huge gains this year – his results in the Maxxis British Championship have been great, thus far. If I were to guess, I would say that Sevlievo was the track that suited him least, so he should be even stronger in the coming weeks! This is an exciting time for British MX, as Ben was joined on the overall podium by Steven Clarke. It is going to be great to see the red plate on a British rider at the next EMX2 round (the GP of Spain), we have not seen that in quite some time!

Jeffrey Herlings: The Bulgarian GP was a big weekend for Jeffrey Herlings – it could have gone either way, I believe, as he could have either lost a lot of momentum, or gained it. Fortunately for him, it was the latter, as he won both races. The Dutchman made a big statement, as he won on the track that he is least comfortable on (like Toni Cairoli), and the circuit that would favour a smooth, calculated rider like Tonus. Now, he is just four points down on the series leader, and he will almost certainly claim the red plate at Valkenswaard. It would take something drastic to stop him, in my opinion.

When we look back on the 2014 FIM Motocross World Championship in the future, I think we will look at Sevlievo as the round that shaped the MX2 title fight. Although there was just a six point swing, the effects that this will have on the two contenders are much greater.

Jordi Tixier: Finally, Jordi Tixier seems to have turned his season around somewhat, as he climbed onto the podium in third overall at the Bulgarian GP. Prior to round five, I think we could have called his season a disaster, as he didn’t show any glimpses of speed. I’m still not sold on him, still, but things are looking up, at least. Tixier seems very fragile, when it comes to his mentality, which appears to be his greatest downfall. Even the Red Bull KTM team have hinted at this in the past. If this is the case, then this finish will do wonders for him, I’m sure, and we should start to see the Jordi that we saw in the latter stages of last year.

Jeremy van Horebeek: Well, here we are again, another week that Jeremy van Horebeek makes his way into the ‘Hot’ section of this column. I am extremely impressed with the Belgian, he is undoubtedly the standout performer in the class at this stage. Honestly, I am running out of positive things to say about him. Simply, he looks like a contender for wins on every surface, so it is only a matter of time before he tops the podium. This is great for Yamaha, also – they have had some horrific results in recent years. But, Jeremy has saved the brand, and the reputation of their 450f in the MXGP series. The Jeremy van Horebeek bandwagon is quickly filling up!

Max Nagl: Following his performance in the qualifying race on the Saturday, most presumed that Max Nagl would at least be a podium contender on the Saturday. However, Max struggled in the technical conditions; he only just broke into the top ten each time. Of course, the speed was still there – that does not go away. However, some incidents (that were out of his control) hindered him each time out, as he lost a lot of time. So, his goals quickly shifted to salvaging whatever points he could on the day. Unfortunately, this did him no favours in the series standings, but it is a long season, and he’ll have plenty of chances to gain some ground on the riders in front of him.

Joel Roelants: Better days are ahead for Joel Roelants, undoubtedly. For the most part, Roelants has had the same sort of results that he had when he was on a factory bike last year. So, when you consider that the MXGP class is more stacked this year, and that he is no longer on a factory team, he has been pretty solid. Unfortunately Roelants’ streak of consistent results has come to an end recently, as he has scored just nine points over the last three motos. Joel didn’t finish race one at Sevlievo, following two crashes; he then finished fourteenth in race two. In the future, he will want to become a fixture inside of the top ten.

Mel Pocock: Unfortunately, Mel Pocock did not score a single point at the GP of Bulgaria, following a handful of issues. Pocock actually had a seventh in the qualifying heat on Saturday, which was one of his best finishes in the series thus far. However, in the opening race on the Sunday, Mel had to drop out with a bike issue; his HM Plant KTM UK 250f cut out a handful of times, before stopping completely, due to an electrical issue. In moto two, he crashed in turn one, and seemed to be in some discomfort with his shoulder, which eventually knocked him out of that race, too. The one positive that has come from his weekend is that he is going to be okay, and will be ready to battle for the win at Foxhill this weekend.

Jose Butron: Okay, I would say that now is a good time for Jose Butron to hit the panic button. I was trying to think of one positive that the Spaniard can take from the first five rounds, but I cannot think of one. At the GP of Bulgaria, he got five measly points, which is disastrous. I am beginning to question whether there is an underlying problem with him; he should be much higher up than this. At this point, he needs to gradually build some momentum, and confidence. But, in order to do that, he needs to first grab a strong result.

Luke Styke: At the previous round, Luke Styke grabbed some positive finishes, and looked like he was going to fulfil his potential. I do believe that eventually, he will become a firm fixture inside of the top ten, as he has the speed. But, he has had a rough introduction to European life – he had health issues at round one, so it took him some time to get over that. Unfortunately, Luke crashed in race one (whilst running a fifteenth), and tweaked his wrist a little, which hindered him throughout the day. I just hope that the Australian shows some potential soon, as more often than not, riders that come over only get one shot.