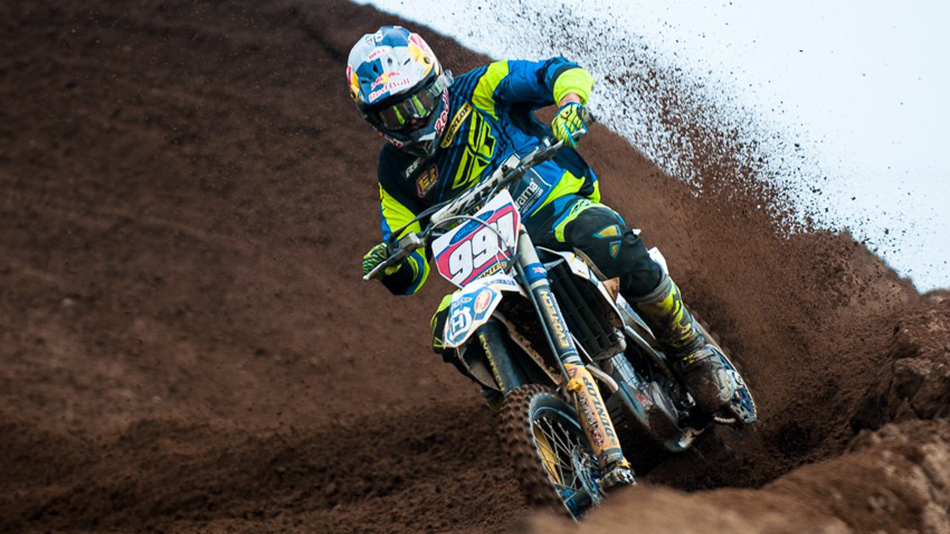 The inaugural MX Nationals series has garnered a lot of attention, in recent weeks, as the ethos behind the championship is one that most people believe in. The second round took place this past weekend, at the brutal track of FatCat Moto-Parc, which was the perfect test of both rider and machine.

Nathan Watson: Nathan Watson had a lot of momentum on his side heading into FatCat this past weekend, following the success that he has enjoyed in recent weeks. Nathan is looked at as a sand specialist, unsurprisingly; he thrives on the soft surface more often than not. So, with this in mind, most expected him to top the podium at FatCat. I would argue that his ride this past weekend was the strongest that we have ever seen him; he had no issues whilst pushing through the field. The Dantec Husqvarna UK rider now has a healthy gap in the series standings, too (almost a full race advantage), so things are certainly looking good for him at this stage.

Priit Rätsep: Finally, the Oakleaf Kawasaki team has something to shout about! If there was going to be a track that Priit Rätsep was fast enough to podium on, FatCat was going to be it. Priit is certainly a bit of a sand specialist (are you noticing a theme here?), so he was expected to thrive at round two. In recent weeks, he has really turned his season around – he has started to show some of the potential that encouraged the Oakleaf Kawasaki squad to sign him. Of course, the greatest test for him will be in the coming weeks, as he will have to find a way to garner these type of results on hard-pack.

Brad Anderson: Brad Anderson has had an inconsistent start to the new season, as he has had some brilliant rides, and some disappointing results, too. FatCat was one of his best rides, undoubtedly, as he climbed up onto the podium in third overall. An eighth in the first moto (on Saturday) hindered him in the overall classification – he was much stronger on day two, as he had a second and a fourth. Brad still has some work to do in the championship standings, as he had a bad time at round one. But, hopefully he can build on this moving forward, and make regular appearances up on the podium.

Bryan Mackenzie: If there is one downside to the mixed format, it is that the MX2 riders do not get much credit. Bryan Mackenzie (and the rest of the MX2 frontrunners) were battling hard all day long – it was some of the greatest racing that we saw all weekend. Bryan Mackenzie eventually garnered the most points, and topped the MX2 overall podium. But, I’m sure he would have liked to gain more points in the series, as he scored just one point more than Neville Bradshaw.

The Gate: Unfortunately, the MX Nationals crew have had to deal with some obscure issues thus far, such as the gate not dropping at FatCat this past weekend. Eventually, the issue was resolved, and the rest of the races ran without a hitch. But, a flag start had to be used for the first pro race. Although this had the potential to be quite disastrous (with guys cheating), it ended up being very fair. I heard many people state that it was the fairest that it could have possibly been, which is a real credit to the riders.

Elliott Banks-Browne: FatCat had the potential to be a great weekend for Elliott Banks-Browne, as he showcased a lot of speed throughout the weekend. Unfortunately, it ended in the worst possible way, as a backmarker refused to move out of the way, and eventually caused EBB to crash on the fastest section of the track. Banks-Browne damaged his shoulder in the fall, and cut his face up; he obviously did not finish. Elliott is going to have surgery on his shoulder immediately, so he will be out of action for the next couple of weeks, unfortunately.

Kristian Whatley: In order to win this championship, Kristian Whatley really needed to claw some points back on Nathan Watson at FatCat. But, unfortunately, he just missed the overall podium by a single point. Obviously, the fact that he has not finished on the podium at either round of the MX Nationals is a bit disastrous, as you would think that Kristian would be up there even on his bad days. Arm-pump hindered him this past weekend – he clearly had the speed to fight for podiums, but he dropped back whenever his arms tightened up. We have a lot of hard-pack tracks ahead, so he should be much more comfortable on those circuits, and able to make up some points.