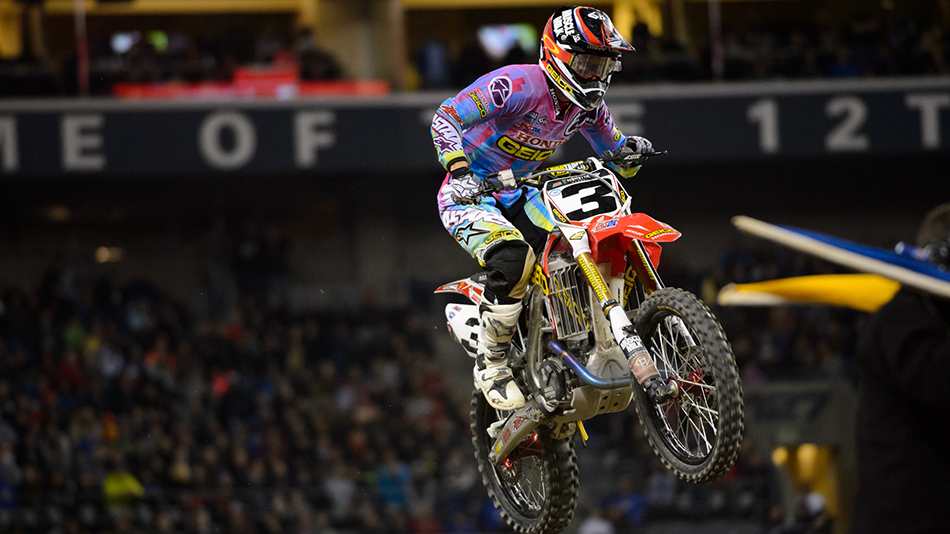 The Monster Energy Supercross series made a return to the New York area (the stadium was actually in New Jersey) this past weekend. Of course, this was a big deal for the FELD Motorsports guys; it was a chance for them to expose the sport to a new market. It was evident that this was important to them, as they spent a lot of money on activation, in an attempt to garner the attention of some locals.

It was an exciting time for the riders, too, as you would expect. After all, to be remembered as the rider that won when the series returned to New York is a pretty cool thing. Unfortunately, some guys had a weekend that they would rather forget, though.

Ryan Villopoto: Yeah, I know, it is shocking that Ryan Villopoto is featured here, right? Usually, a rider that can lock up a title does what they need to do, and nothing more. Why bother pushing the limits when it is unnecessary? But, Villopoto ignored all of that, and dominated. With the slippery, technical conditions, it was certainly risky, but Ryan has the skill-set needed to thrive in whatever conditions. Interestingly, he seems to have flicked a switch in recent weeks, as he has won the  last three main events, and has led the last sixty laps – that is quite incredible, and indicates just how depleted the field has become.

There was a bit of added incentive for the four-time champ, though, as he had to beat [James] Stewart in order to win the ‘Toyota Triple Challenge’.  The $250,000 prize for winning all three main events was no longer an option, but he still won the truck, which was a nice little coup. In his usual reserved fashion, Villopoto stated following the main event that he was happier to have won the truck, rather than the championship!

Eli Tomac: It is rides like this that will help Eli Tomac keep his head up, because this season has been quite disastrous, to be honest. This was the second 450SX podium finish that Tomac has garnered in his career, the first came in Indianapolis. Interestingly, they were both in similar, sloppy conditions, so this is seemingly where he thrives, surprisingly. Eli spent his entire 250F career over on the west coast, so you would think that he would be more comfortable on slick, hard-pack stuff, right? Well, even he is a little surprised by this turn of events, it would seem!

Josh Hill: The last time that Josh Hill jumped onto the 450SX podium was at Anaheim 3, on February 13th in 2010 – he was second on that night. Usually, comebacks like this do not work, but kudos to Josh; he never gave up. In the past, Josh has had some success at Las Vegas, too, so he could continue this form. Unfortunately, following the spectacular finale, he will be left without a ride, which means he is going to have to overcome some more adversity.

Recently, Josh claimed that if he could get out of the gate with the frontrunners, he would be on the podium. Well, in East Rutherford he started second, and he finished third; he wasn’t lying when he made that statement! It was good to see him having fun up on the podium – that side of the sport has been lost a little bit, it seems.

Justin Bogle: It was a strong ride for Justin Bogle, he really stamped his authority on this series. Although Bogle did not have the best of starts (he ended lap one fourth), he swiftly moved through the pack. Justin was getting over the triple that was before the whoops cleanly, and he was one of the only 250SX riders that was able to do this during the main event; he set up a lot of passes this way.

Although Bogle has not officially clinched the championship, he actually has. You see, Martin Davalos is the only rider that has a mathematical shot at the title, and he definitely won’t be racing in Las Vegas. So, unless Davalos makes a miraculous recovery, Justin will wrap up the championship, even if he scores no more points.

Ryan Dungey: I have been thinking about this a lot recently: is this season a disaster for Ryan Dungey? With one round remaining, Dungey has had a single win, and eight podium finishes. Although that looks very impressive on paper, this is Ryan Dungey we are talking about! Dungey has finished off of the podium a lot more than usual, which may be a result of the deep field. But, he hasn’t shown the speed required to win at any point, except for his Indianapolis victory, which was in unique conditions. Despite all of this, he again has a firm grasp on second in the standings!

James Stewart: James Stewart almost made it through a whole season without any injuries, but, he damaged his knee in East Rutherford. At this point, the extent of his injuries are unknown, but it doesn’t look good. It was the same sort of incident that tore his ACL at Anaheim 1 last year. James gave up second in the series, and lost out on a chance to win the Toyota truck, because of this incident. So, it was certainly a costly night. I would guess that we will not see him in Vegas, but hopefully he will return for the outdoors. We will learn more either today or tomorrow.

Trey Canard: Trey Canard has shown a lot of speed, and skill, since his return to the Monster Energy Supercross series. In the practice sessions Trey is often one of the first riders to jump a section, or figure out a new way to make it through a section. However, he hasn’t yet made it onto the podium, which was his goal. However, does that really matter? Canard is clearly just as fast as he was before the injury, he beat James Stewart straight up in heat one on Saturday night. The most important thing is that Trey has gained momentum before the outdoors series, which will prove to be beneficial.

Kyle Cunningham: Following the recent injuries that the 250SX East frontrunners have sustained, Kyle Cunningham was one of the riders that could have taken advantage, and moved into the top three in the points. There is still a chance that he could finish there following Las Vegas, but he didn’t really take advantage of the situation on Saturday; he ended up in sixth still, which is where he has been finishing all year. Really, he should have been a podium contender.