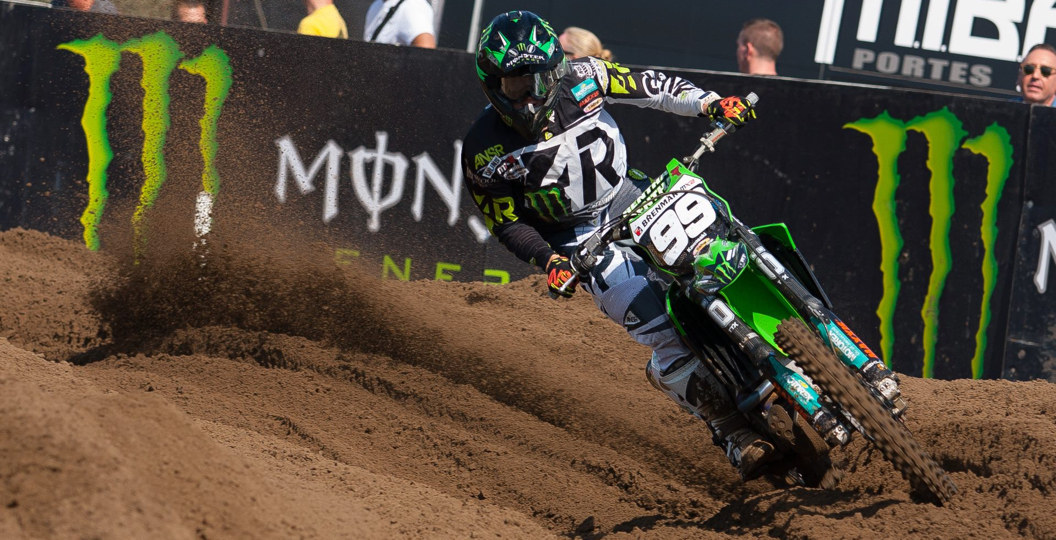 Hot and Cold: GP of Belgium

Shaun Simpson: The underdog is someone that everyone roots for. Who doesn’t love a feel good story? No rider fits that mould better than Simpson, who puts it to the factory stars each week on what is lesser equipment. His results at past events have been good, but not exceptional, which perhaps causes him to be overlooked by factory teams who are looking for someone to shock the world weekly. The Scotsman did exactly that in the treacherous sand of Lommel, however, as he had it all; the ability to pass the other contenders, rebound from a fall and also put in a blazing lap. Yep, the day belonged to Shaun.

Max Anstie: In a class that has been as crazy as MX2, having a bit of predictability feels slightly foreign. In Herlings’ absence Max has a tight grasp on the ‘sand master’ title, so his second clean sweep of the season was to be expected. What Max had no control over is what the other contenders did and, with the exception of Jonass, they faltered. The deficit that the DRT Kawasaki pilot now faces is a hefty forty-six points, but I’m not ready to give up on his title hopes. He’ll have to be near perfect over the next four rounds, but that isn’t unrealistic either.

Pauls Jonass: Here is an intriguing stat, which I just stumbled upon. Pauls Jonass set the fastest lap time of any MX2 rider on Sunday, with a 1:54.471 in moto one, which was nearly two seconds faster than Anstie’s best time in that same race. Pauls’ speed hasn’t been called into question this year though, but his ability to sustain it over the course of a thirty-minute moto has. Although we saw him drop off at the end of the motos on Sunday, he posted a 2-2 scorecard and stole the red plate. He hasn’t even won a race yet, or really come close, so how shocking would it be for him to be crowned champ?

Gautier Paulin: I don’t know what to think, honestly. A pair of seconds is a strong result and certainly one of the highlights of what has been a distinctly average season for the Frenchman. We know that he can win in the sand though, as he did it in a dominant fashion at Valkenswaard, so should he have given up the lead in the second moto? I personally think he tried to go too fast, too soon and that caught up to him much sooner than he thought it would. The end result was good though, so can you really fault him?

Valentin Guillod: I had pinpointed the Belgian GP as the round that could potentially cost Guillod the title in the days prior to the race, but I didn’t quite envisage it going so badly. Bad luck entered the fold with the second moto DNF, as clipping someone else’s bike ripped a hole in the radiator. His first moto was far from good either, as he struggled to crack the top ten before salvaging a twelfth. Those points could come in handy in the championship standings, but with a twenty-five-point gap to Jonass he needs to get his head down.

Brent van Doninck: I had tipped Brent van Doninck to finish on the podium at his home fixture, following some impressive displays of speed in the practice sessions. He just couldn’t quite translate that to the races, for whatever reason, although crashes were largely to blame. His weekend eventually ended early when he was struggling to breathe after a second moto crash (and it was actually his bike which ended Guillod’s day). It was obviously a day to forget but, like his teammate Paturel, there is definitely potential here.

Filip Bengtsson: I, like many others, expected a lot from Bengtsson at Lommel. Although what we saw was an improvement on previous weeks, as he had the speed to run top ten, the end result wasn’t the best. Fourteenth overall is seemingly something that he is bitterly disappointed with as well, based on these comments; “I was aiming for two top-tens so to leave here with 14th overall is not good. We really need to analyse what happened this weekend and find a solution for my problem areas.”

Glenn Coldenhoff: Again, expectations may have been a little too high of Glenn after his last visit to the sandy terrain resulted in a GP win. Lommel is a completely different circuit; just look at the amount of post-race comments that indicate it was the toughest track the riders had ridden. A 6-12 scorecard (the twelfth coming after a crash) isn’t awful and is actually consistent with what we have seen him do at other races. That win has certainly made us expect more of the Dutchman though, which is perhaps a little unfair.