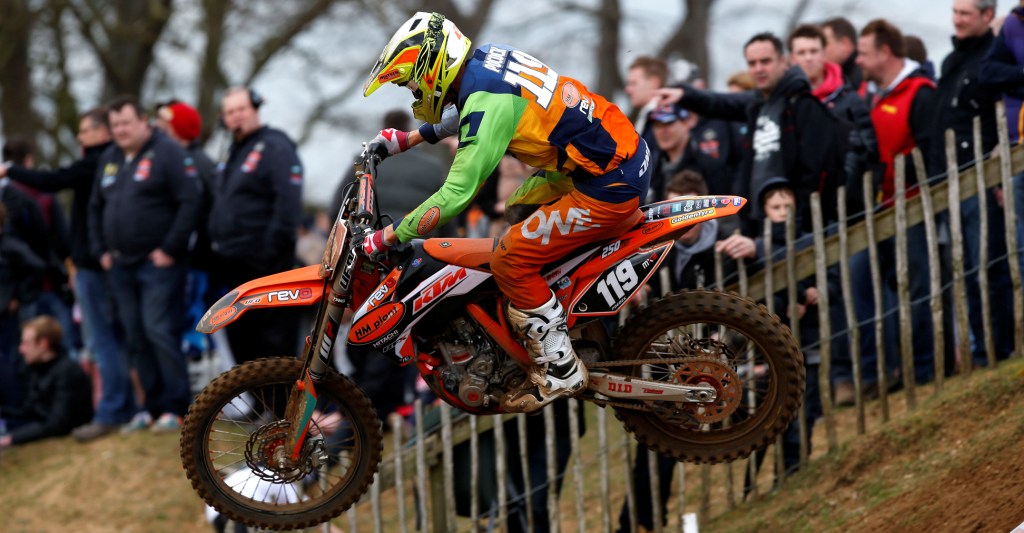 Fresh back from a Brazilian adventure, the HM Plant KTM UK team made the arduous trek to Lyng in Norfolk this past weekend. Cadders Hill turned out to be perfect, with a rain shower overnight damping the track down nicely for Sunday’s hot action.

Qualifying on Sunday morning got off to quick start; the team’s four MX2 riders all qualified for the super-pole, which allowed them another chance to better their positions. In this second session, James Dunn pipped Mel Pocock to the honour of highest qualifier with a fourth place over Mel’s fifth on his first ever super-pole! James Cottrell and Ben Watson ended the session in ninth and tenth respectively.

In the MX1 class, Shaun Simpson qualified in second, but he quickly improved on that in his super-pole by going pole over two seconds quicker than runner-up Gert Krestinov. Josh Spinks qualified further down in twenty-third.

Mel’s weekend can only be described as consistent. A runner-up position behind Adam Sterry in the first race turned into two attempts of snatching the lead in races two and three. Although those attempts did not lead to race wins, the resulting positions still gave him the day overall win and another round with the red plate.

Ben struggled with the concrete start in his first race, but he quickly took to building himself a dirt gate in the latter two races and made good with two great and consistent top five results that earned him a sixth overall on the weekend.

JC711 is making good progress towards his goal of being in the top five every round. The first race was proof of that with a steady run in fifth throughout, while the latter two races saw him get off the start a touch more sedately. Despite the slow starts, he worked his way forward again to end in ninth and eighth for a seventh overall on the day.

Dunny stepped up to the plate with a great delivery. Buoyed by his qualifying position, he hoped to follow up with some great results, but his starts let him down. Nonetheless he delivered a sixth place in his second race to complement his other two results just outside the top ten for a twelfth place on the weekend.

Shaun took home the red plate and a nice big piece of silverware for his top spot on the day, despite only being able to win the first race of the weekend. The second race saw him try time and time again to dislodge his fellow KTM rival Jake Nicholls from the lead, but he had to make do with a second place. The third race would have been his to take home, if it had not been for a small but crucial mistake on the finish line that cost him his lead.

Josh put in a consistent effort around the tough sand track too. Although he was left behind by his starts, he had a consistent run in the first race and was on track to get some points in the second, but he was pushed back with minutes on the clock to end outside the points. The final race though worked for him and after hitting the top twenty early in the race, stuck it out to end seventeenth for a twenty-third on the day.

“I still haven’t won a race yet, but consistency is key at the moment, I’m pretty confident I can win a race soon, I made a few mistakes today and a few riders got in front of me and I’m happy to be on the top step of the podium. Mark has built a good engine for me this weekend, it’s even better than last weekend’s which is a good step forward, and thanks to Sam and the team for plugging away!”

“The weekend started off pretty well! In qualifying I was sixth, and that’s the first time I’ve ever gotten into the super-pole. Went out and put in an even better time than I did before, so yeah, I’m happy with the qualifying because I usually struggle with that. The first race start was not great, and I had a few crashes and ended up twelfth. In the second race I had another bad start, and it’s very difficult to pass around this track due to the speed and because it is quite one-lined in places, but I got back up to sixth and was pretty happy with that. In the last race, terrible start again, so I think I ended up thirteenth in the last race. I’m definitely going away here to work on my starts, they were really bad this weekend, at least I know I had the speed to run at the front, and if I work on my starts I can run at the front at the next round.”

“I had a much better qualifying this week; I went into the super-pole in twelfth, and then managed to bump myself up to ninth. First race I got a good start and then just ran a lonely race in fifth, I was quite happy with it, because it’s better than it’s been going. Second race was a bit poor, got a bad start and didn’t make much headway, ended up ninth. The third race was the same problem, I got settled into too slow a rhythm in the beginning and was left with loads of energy at the end. In the last three laps of the race, my lap times were 3 second faster than they had been. I’m pleased with my fitness but not with my speed today, I need to be going quicker.”

“In qualifying I went out there aiming to get into the super pole and then try to get a better lap in, in the end I got a ninth in qualifying and went into the super-pole and messed up my lap a little bit. I dropped a place to tenth, but I was still happy with that. In the first race I tried to go off the concrete and it didn’t really work and I managed to get up to tenth, I think. In the second race I built a big mud gate, got a better start, managed to get up to fourth, so I was happy with that and with my speed. In the final race I went out there and built an even bigger gate, and I just tried to keep up with the leaders, which I did. If I’d had a better first race, it probably would’ve been a great weekend.”

“I don’t like Lyng normally, so I knew this weekend was a case of ‘get it out of the way’. I thought I could go 1-1-1 and I still believe I could’ve done that today. In the first race I was lucky with my win, I had a clutch problem with four laps to go, but Jake had a problem too. In the second one I just couldn’t find a place to pass Jake; he was riding well and I knew I had a little bit extra, but I couldn’t get past him to show it. In the last race got out of the start good and started to eke out some sort of gap, then I made a stupid mistake at the finish and got cross rutted, ended up spinning the bike around and Nathan Watson ended up stealing the win. Credit to him for getting up there and battling with us GP riders, because we’ve done three GPs now, and that fairly brings your speed long, so fair play to him. I’m looking forward to Foxhill, the red plate’s on the bike again, so an overall win, can’t complain.”

“I struggled in qualifying, I didn’t get a comfortable lap in and ended up twenty-third, which didn’t give me the best gate pick, but it could’ve been worse, I guess. Went into race one, got a really bad start, concrete starts have always been something I’ve struggled with, so coming from the back of the pack to twenty-first in the end, struggled to make some passes but that’s where I finished. Second race was much the same. In the last one got another bad start, but I ended up seventeenth, which was a better race and I was happier with that one. Shaky day, not the best, but looking forward to Foxhill.”

“Another really sound day at Lyng with all team riders proving that they can all run in the top 6 in their respective championships. Lyng hasn’t been the kindest of circuits to Shaun Simpson in the past, but he turned things around today with the overall victory and extended his lead by a few points. Mel also rode consistently today and ended up on top of the box once again, also improving on his championship lead. The MX2 class this year is really very competitive and you have to minimise any mistakes. James Cottrell had a stormer of a race in the opening MX2 moto with a fifth, and Ben Watson and James Dunn showed that they are maturing every week and both had some solid performances in all their races today. Back in Northern Ireland, Small Wheel 85 pilot Curtis Trimble scored 3 moto wins to take the team’s third red plate of the weekend, now leading the Ulster Championship.

“We now turn our attention next week to the first MXGP on European soil in Italy, with the trip to Bulgaria the following weekend which also is the commencement of the EMX250 Championship.”